Are wireless chargers as fast as they promise to be?

You love the idea of being able to just set your smartphone on a wireless charging pad and not have to frantically search for a cable to connect your phone to a charger. Charging pads look sleek and cool, and they promise a more convenient charging experience. Does that also mean they charge faster than wired chargers? 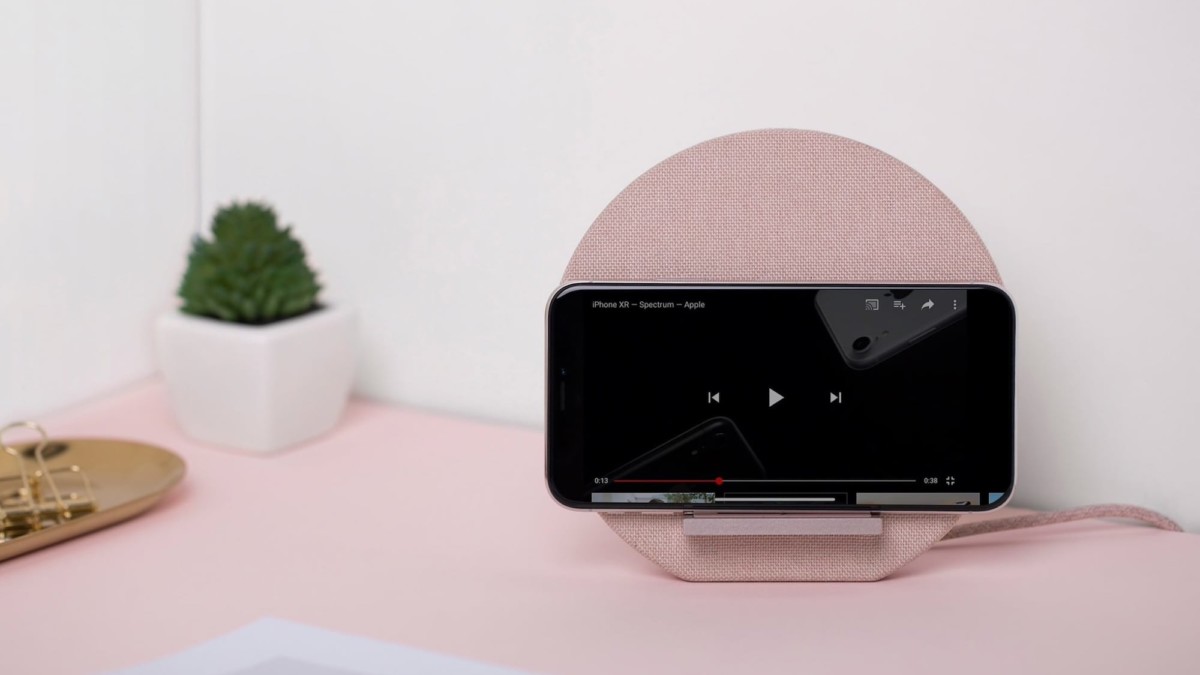 When vendors unveiled wireless charging at CES 2010, they promised a future without wired charging. One where you could simply place your smartphone, tablet, or smartwatch on a table or desk and have it fully charged in a couple of hours. Ten years later, we see more and more devices that are compatible with Qi wireless charging. Companies say they make charging your phones easier. But are wireless chargers fast?

What is wireless charging?

Wireless charging is a technology that allows charging over (very) short distances without cables.

According to Mobile Fun, the benefit of wireless charging is that it’s an easier and quicker charging experience. This is because you won’t have to plug and unplug your device every time you need a charge. You just place your gadget on top of your wireless charging pad. It also makes your desk or nightstand look tidier. 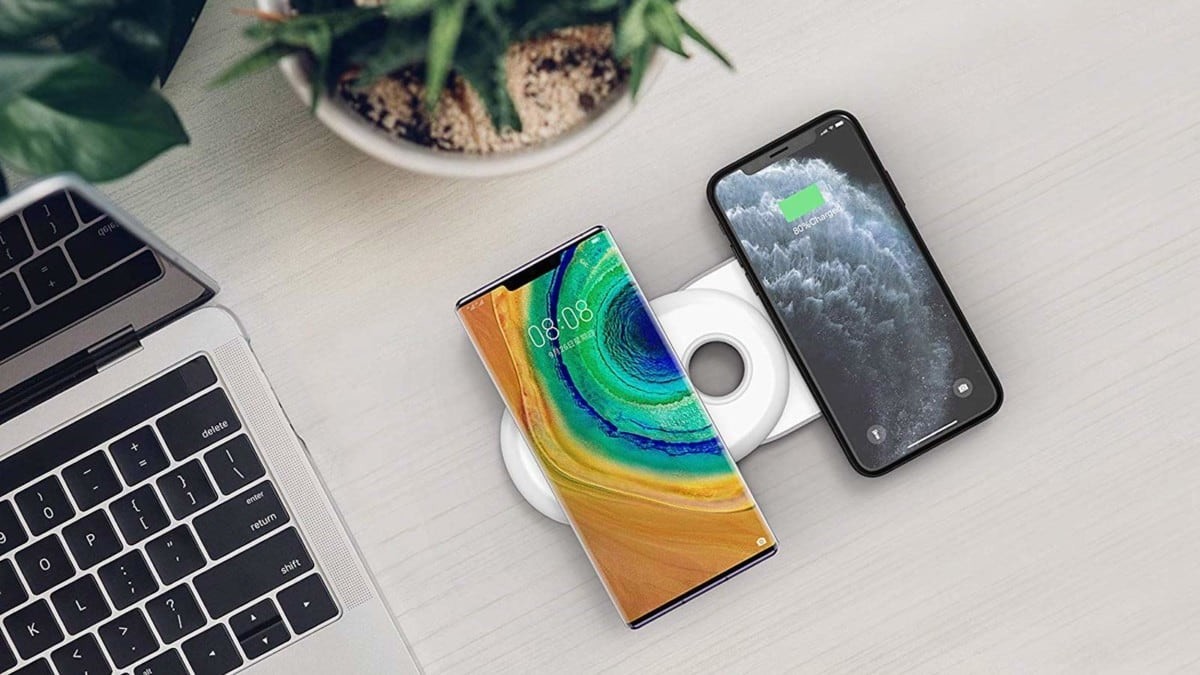 There are a variety of competing standards for wireless charging. The Qi standard is the most popular since all of the major companies support it. Apple iPhones now boast wireless charging on its latest models, and Samsung has already featured the technology for some time. What’s more, Samsung also created a range of wireless chargers that work with all phones that support Qi wireless charging.

How does Qi work?

Wireless charging has been with us for quite some time. Just look at your electric toothbrush. In Qi wireless charging, there is a resonant inductive coupling between the charging station and your device. It sounds complicated, but, during wireless charging, your device sends a regular test signal to the charger to check for a resonance change. This tells the Qi charger base that the phone is Qi-compatible. The phone then modulates the charge and checks for compatibility to the Qi standard.

Once the device and charger confirm their compatibility, the charging through induction begins. During the charging process, the phone and the charger must remain in contact. They both switch into standby mode when the battery reaches a full charge. Also, the Qi charger base activates and transfers energy only when you place a compatible device on it. So they use a little less power. 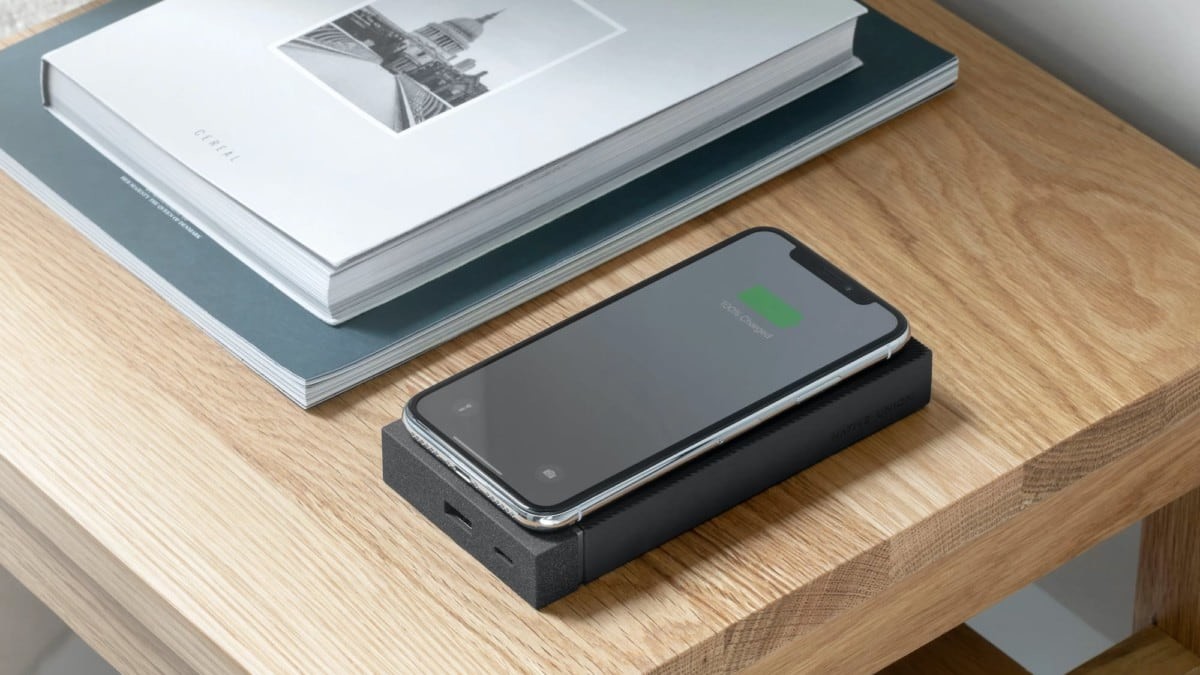 Wireless charging can be finicky

The advantages of wireless charging are that it lets you easily charge your phone, you don’t have to hunt for cables, and it’s unnecessary to plug and unplug your devices. However, up until now, the technology has had its limitations. For instance, you can’t simply place your phone on any surface. Instead, you have to work with small pads that can fit one, two, or three devices at once.

Also, you have to set your phone on the pad’s wireless charging coil in just the right spot. Otherwise, you may wake up in the morning to a phone with no charge. That’s not cool. The process is even trickier when you’ve got a wireless charging pad that supports multiple devices. Also, It’s easy to bump into your nightstand or desk and make all of the devices shift slightly. If this happens, they could lose contact with the charging coil. In the end, this could result in depleted batteries across all of your devices. That’s also inconvenient. 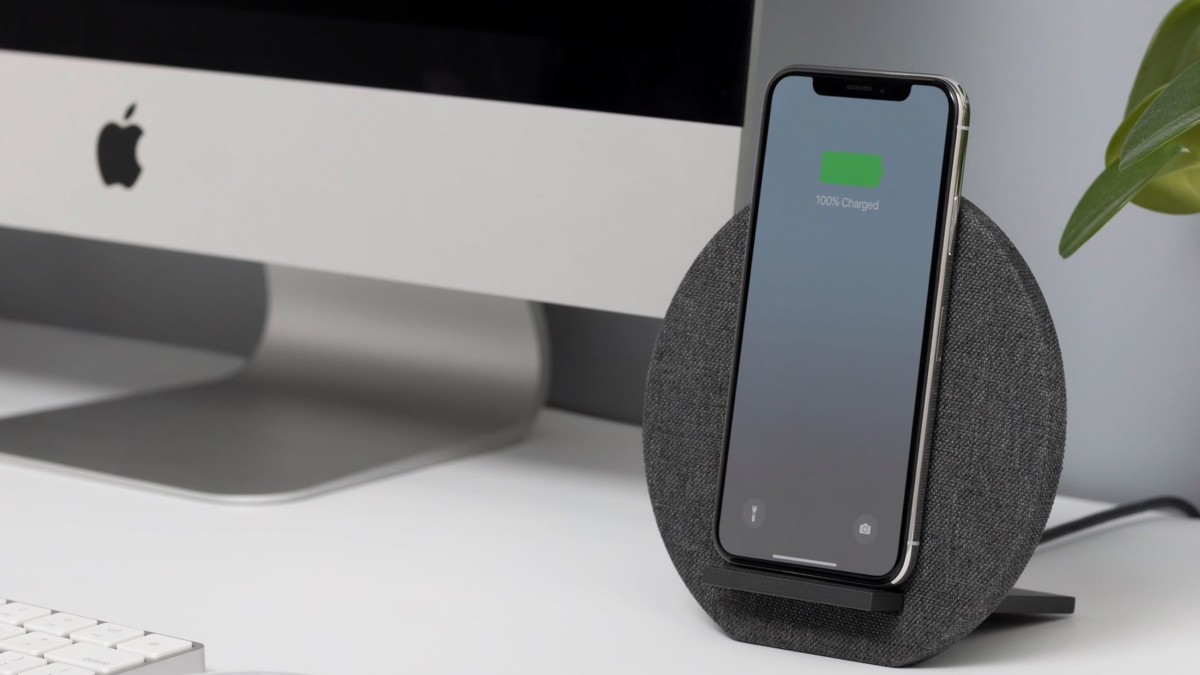 How fast can a charging pad juice up your phone?

According to PCWorld, until recently, one of the most significant drawbacks of wireless chargers was their slow charging. So wireless chargers were never hailed as a way to quickly charge your phone. However, the technology itself may be finally reaching a point where its speed is faster.

To determine which pads offer the fastest wireless charging at this point in time, PCWorld tested some of the most popular Qi-charging Android and iPhone models and found some successful options.

Qi-enabled chargers are becoming easier to use

Going back to the finicky nature of many wireless chargers, ZDNet reports that a new company, Aira, wants to change wireless charging in 2020. The founders, Eric Goodchild and Jake Slatnick, struck a deal on ABC’s Shark Tank in October 2019. So you may have already heard that the Aira FreePower technology creates a free position wireless charging surface. This means that you can place a Qi-compatible device anywhere on a FreePower surface and it will charge. So you won’t have to worry about lining up those coils or bumping the surface by accident.

Also, Aira’s first product will be able to charge three different devices at once. The design features 18 coils managed by firmware and custom algorithms. What’s more, Aira won’t lock you into a single size or design. You can customize the FreePower surface to be larger or smaller depending on your needs.

All this means that the wireless charging process will be streamlined and less prone to human error. In the end, this will translate into a more reliable, and thus faster, charge.

What should you look for in a wireless charger?

The future of wireless charging, and its speed, still has potential. If you want to buy a Qi charger today and need to consider if wireless chargers are fast, here’s what you need to look for.

According to PCWorld, the first question you have to ask about a wireless charging pad is whether or not it supports fast charging?

The packaging for most wireless chargers will indicate its speed. Look for the wattage speed on the box or in the specification listing for a charger, then compare that with the speed at which your phone can charge.”

Finally, PCWorld notes that while wireless chargers have become quicker, your fastest charge will still most likely come from the charger designed for your device.

What are some of Gadget Flow’s latest wireless charging devices that support fast charging?

We’ve got some cool, fast-charging wireless gadgets to mention, too.

Simultaneously fast charge your phone and watch a show with the UNIQ HydeAir. The 10,000 mAh battery supports ultra-fast charging with 18W power delivery. And it charges up to three devices at once. One device can charge wirelessly, one can use the USB-A port, and the third can use the USB-C port. On top of being delightfully compact, this power bank comes with a hidden charging kickstand for phones. 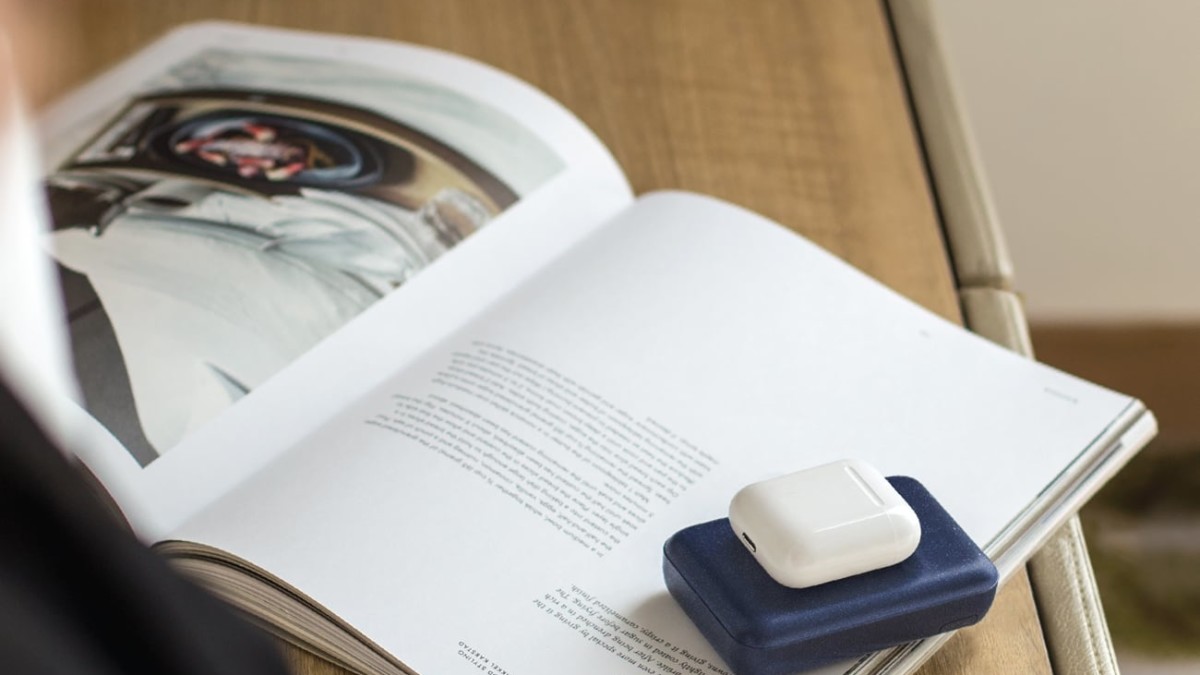 Keep all your gadgets at full power with the RapidX 2Tango Dual Compact Fast Wireless Charger. This little device packs two 10-watt charging pads. In fact, this portable wireless charger can deliver 10 watts of power to Android devices and 7.5 watts to Apple devices. Because it’s Qi certified, it works with any Qi-enabled device. What’s more, you can even fold up the RapidX 2Tango if you need just one charging pad. 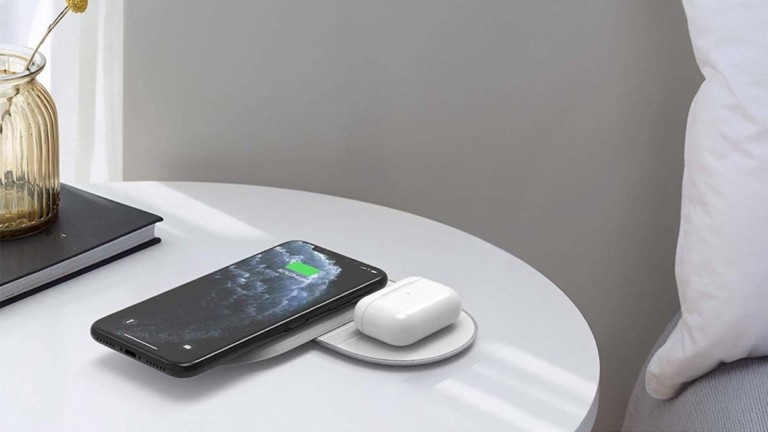 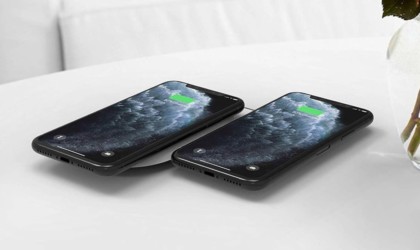 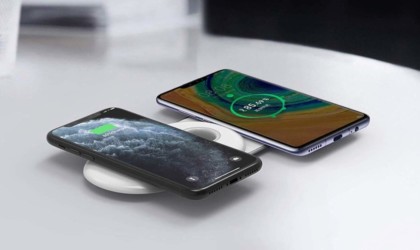 The Native Union Dock Marquetry Wireless Charger Fast Charging iPhone Stand is unlike other phone stands. Made of leather, it’s a comfortable, safe place to rest your iPhone or another Qi-enabled device. You don’t have to worry about it getting scratched or dinged. This wireless charging stand also delivers a fixed frequency of 7.5W power. So you can be sure that this iPhone charger will give your device the juice it needs. If you need to use your phone while it’s charging, you can do so in either landscape or portrait mode. 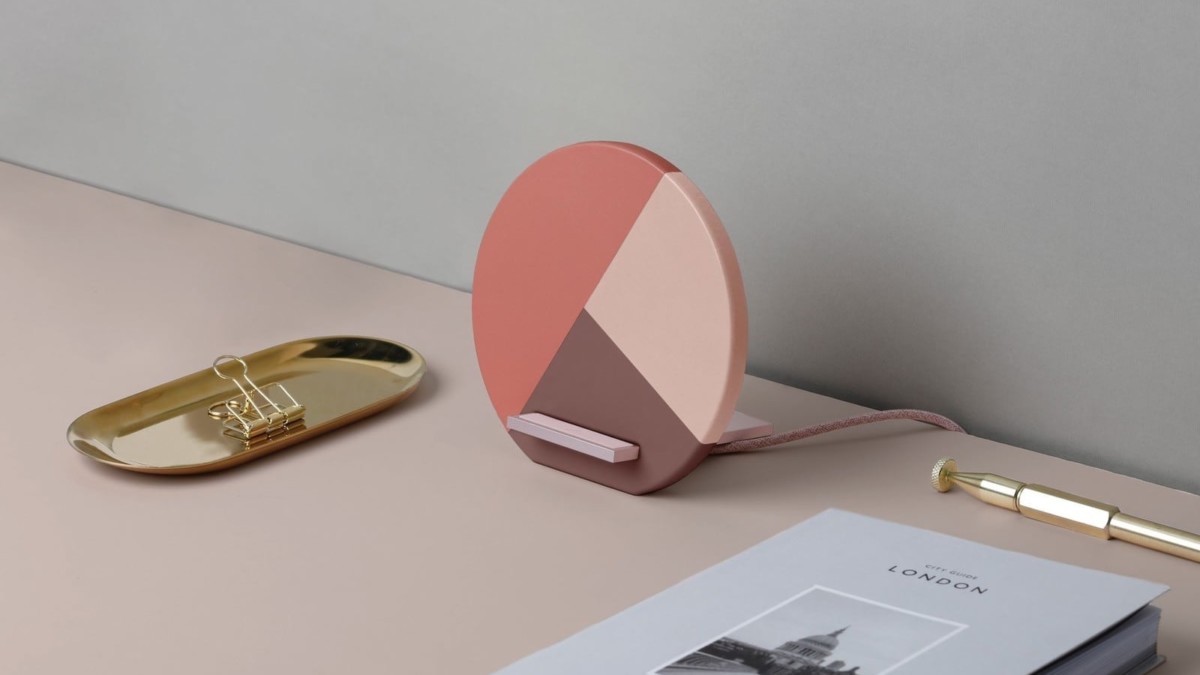 While most of us still dream of the day we’re able to set our phone, laptop, and tablet on a workspace that supports wireless chargers, the fantasy is not quite a reality yet. But with new innovations, we are getting closer to a future where wireless chargers are fast, ubiquitous, and easy-to-use.