This Mirror From iStrategyLabs Has A Classic Interface

The massive attention that selfies have drawn from the young crowd today clearly signals the potential this genre of mobile photography has in store. From renowned celebrities to happy-go-lucky socialites, there’s hardly any social profile which doesn’t comprise of at least one selfie. It’s creating a big time world of photography by itself which, according to Samsung, is close to 30% of the photos taken by people under the age group of 18-24. That’s not a small percentage by any chance! Infact, this actually gives a glimpse of the future prospects in experimentation that this branch of photography can go through amongst innovators. That’s because social networks where lies the entire mass of today’s consumers are completely bombarded with selfies everyday. Take for example, the Oscar selfie by Bradley Cooper last month which had become the most retweeted tweet ever within a short span of time. Undoubtedly, this is one of the present craze that makes photography real fun amongst youngsters.

Now what if this style of photography could have a gorgeous mirror counterpart working as your camera? Initially it might sound like a crazy idea but if you take a deeper thought on this, it can actually make you live like a fantasy novel character. Just like Harry Potter’s encounter with the Mirror of Erised or The Magic Mirror from Snow White, your wall could also have an enchanting beauty that responds to your presence magically. No, none of this is a part of my hallucination. It is about one of the latest projects from iStrategyLabs called S.E.L.F.I.E. Mirror which is bringing magic into our real lives through its alluring mirror interface.

An otherwise extremely simple looking two-way mirror, the S.E.L.F.I.E is brilliantly programmed to take your snapshots and post it directly on Twitter using their own watermark/logo. You could pose as many times as you wish to in front of this charming mirror and get your favorite selfies clicked in no matter of time. The interface is so perfectly designed that you’ll never get to feel the heftiness of programming that goes behind the whole photo-capturing process. Call it a fancy gadget for the selfie-freaked generation the world comprises of today or a simple yet stunning showpiece for your homes, this mirror has ideally blended technology with style. As Verge has rightly written on their review of this magnificent mirror, “the SELFIE feels like a more sophisticated version of last year’s Twitter Mirror, which allowed celebrities to shoot self-portraits and upload them to relevant event feeds.” 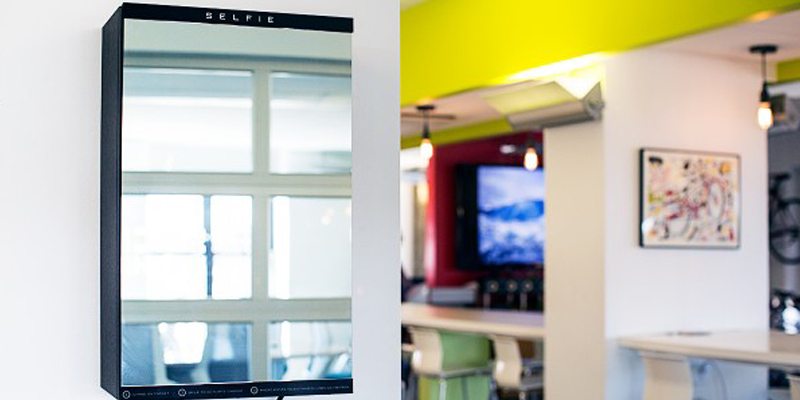 An Elegant Mirror is Now Your Instant Selfie Generator

The hardware that S.E.L.F.I.E hides within itself comprises of a Mac Mini, a webcam and a series of LEDs that are controlled by an Arduino. There’s also a custom vinyl graphic on the floor which shows the right position where you need to stand in order to have the perfect click. The process starts with the Mac facial recognition software that automatically reads your facial gestures and makes arrangements in initiating the photo-capturing process. The LEDs controlled by an Arduino then starts the countdown timer by continuous blinking which is finally followed by a flash that marks the end of the photo taking activity. Without any painful hand movements to get the right facial pose, you get your selfies directly captured from your mirror and that too, in the best way possible. The captured photo is instantly uploaded on your Twitter profile and the rest is left for your followers to admire. The S.E.L.F.I.E is truly an extension to the way we have been used to capturing selfies and comes with much better automation. 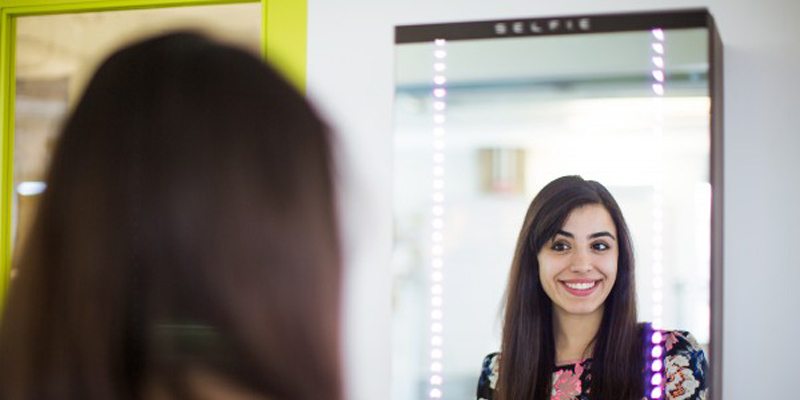 But for some, it might not seem to be technically right to call this mirror a selfie capturer as by definition, it is a type of self-portrait photograph, typically taken with a hand-held digital camera or camera phone. That’s a confusion iStrategyLabs has solved by naming their product as a backronym which stands for “The Self Enhancing Live Feed Image Engine”. So, it’s quite a gem of a creation that could do wonders in the world of photography we are prone to using these days. Creative tech experiments are always an eye-catcher anyday, the S.E.L.F.I.E mirror only adding to that count by generating awesomeness. Happy Gadgeting!