This WW1-inspired trench watch is a collector’s dream

WW1 evokes a host of images. It was a historical time, a time of great change, and a time that none of us living today could truly imagine living in. Many have familial ties to WW1 and look for ways to connect with lost relatives or to pay homage to the sacrifices made during that time. 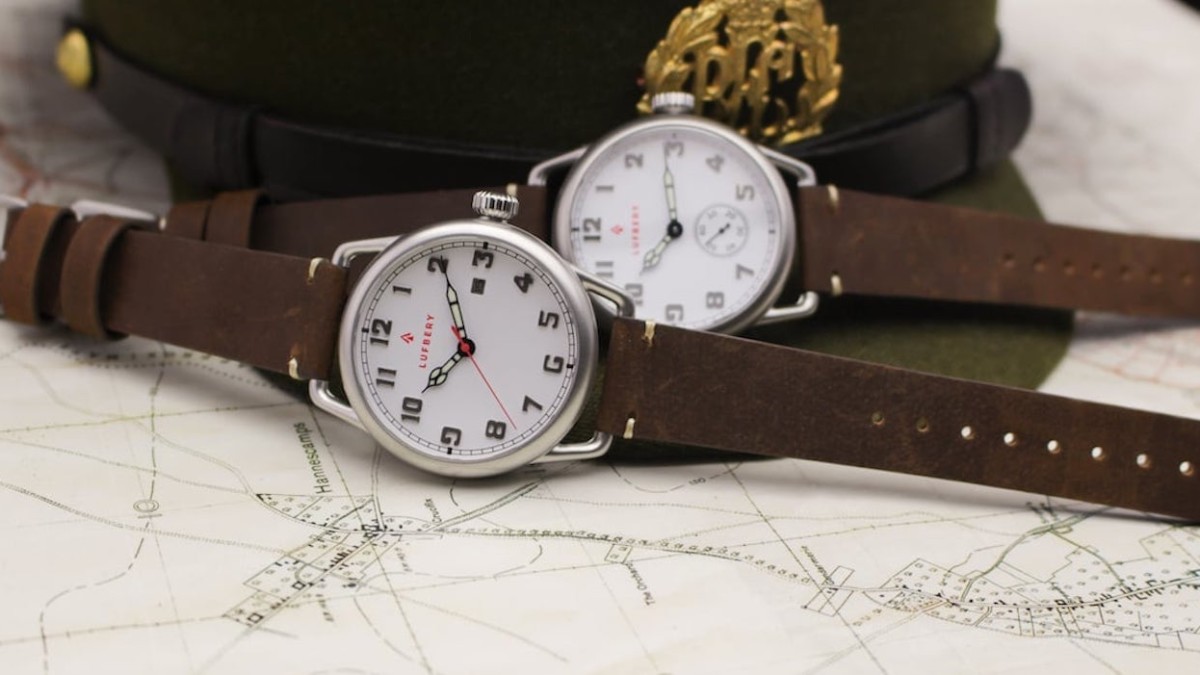 Collecting artifcats is one way in which people remain connected the the past, to history. Reading about something or watching a documentary on TV isn’t the same as holding a piece of the past in your hands. Especially when it comes to the technology side of things. We’ve progressed so far, it’s hard to imagine that wars were fought with technology we now consider to be primitive. Some technology is timeless, though, and watches are one of those things. If you’re looking for a piece of history to collect, the Lufbery Trench Watch is the piece you need.

Original WW1 trench watches are practically impossible to find. If you’re someone who has been looking, you know this already. If you do find an original, it’s typically in pretty rough shape, or it won’t keep accurate time. After all, they’re over a hundred years old now. Hard to believe, right? 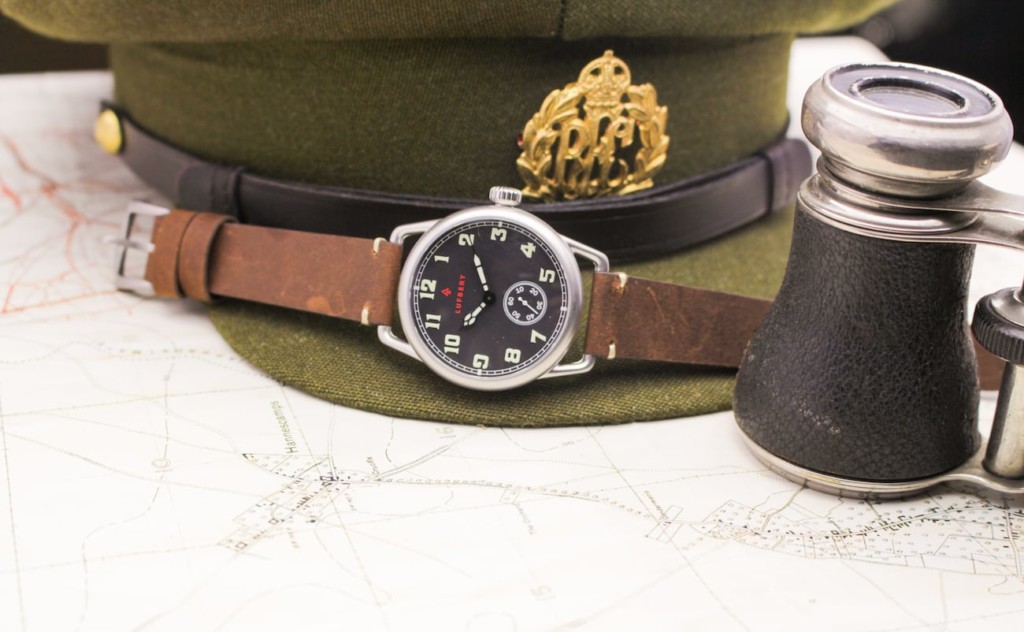 The creator of this watch paid attention to every detail while also modernizing his version of the trench watch. The Lufbery Trench Watch is a gorgeous homage to the original military watches and is unlike anything else you can find. Other homage watches are very expensive, or they are of a lower quality and not meant to mimic the rugged usefulness of the original.

The grandfather of military watches

Trench watches were the first in their class and were first seen in WW1. Watches before these didn’t have the strength to stand up to life in the trenches. They were too delicate and broke easily. Trench watches also broke the mold when it came to the way they looked, with their art nouveau style. If you’re looking for a masculine watch that is a throwback to an iconic place in history but is stylish and of the highest quality, look no further.

The differences between the original and the Lufbery Trench Watch

As we mentioned before, the original watches are over a hundred years old. Even if you can find one, it’s not likely to be in good working condition. And if it is, are you really going to be wearing it as a daily watch? You’ll want to keep it safe and protected, not banging it on the banister every time you go up the stairs.

The original trench watches were smaller, as well. The average was about 36mm, and some were even as small as 34mm. The Lufbery is 40mm in diameter, so you’ll have a much easier face to read. The original also used glass that wasn’t as strong, and it used radium to make the hands glow. Science has given us better options, so we can update those things now to be safer and more durable.

But they both share similarities where it’s important. They’re tough, masculine, and good-looking watches. They’re iconic timepieces that anyone would be proud to wear and show off.

The specs on these beautiful military watches

The Lufbery Trench Watch comes in two categories: the quartz collection and the automatic collection. The quartz collection is powered by a Seiko VD78 movement, and the automatic collection is powered by a Seiko NH15 movement. All of the watches have a domed sapphire glass face on them, so you won’t need to worry about scratching or breaking it, unlike the mineral glass the original was made from. And since the Kickstarter has met its stretch goal, you’ll have glare-resistant sapphire glass on the face. 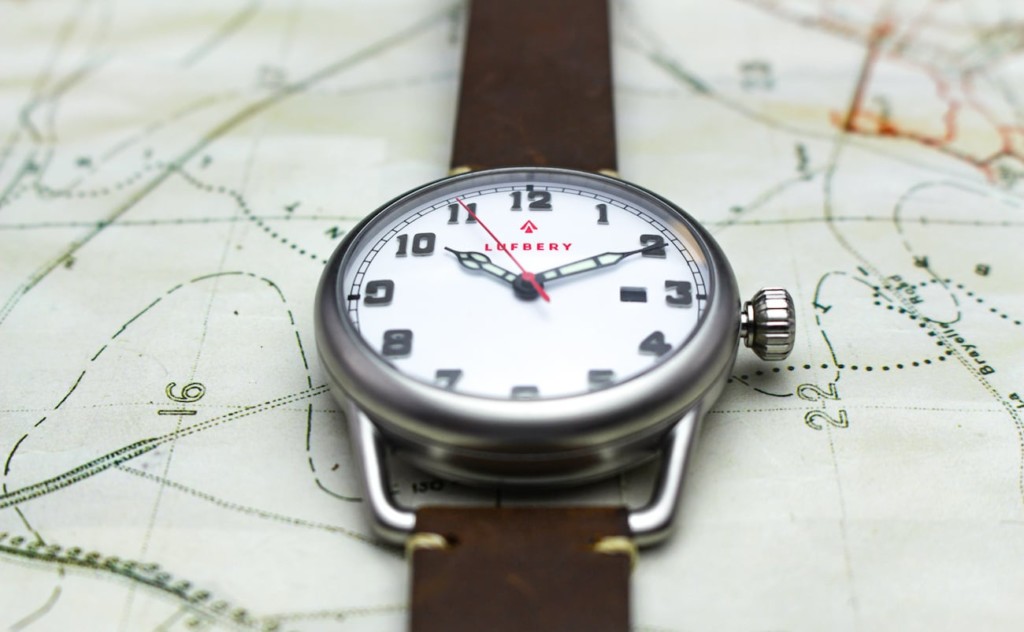 The available colors are beautiful combinations, and you’ll be sure to find one that meets your needs. We also love the attention to detail that was put into the names indicating the different regiments of the British Army.

This watch sports a brown leather band, a silver-colored casing, a white face, and black numerals.

This watch sports a brown leather band, a silver-colored casing, a black-and-white face, and white numerals.

This watch sports a brown leather band, a silver-colored casing, a black face, and white numerals. 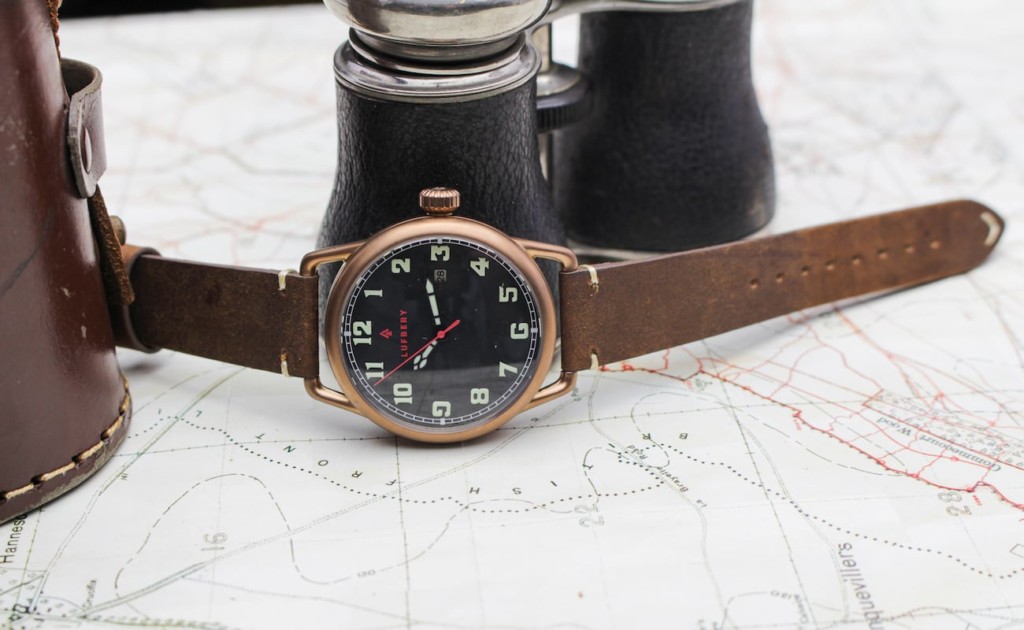 This rugged, masculine watch will complete your watch collection

This watch sports a brown leather band, a black-colored casing, a black face, and white numerals.

This watch sports a brown leather band, a bronze-colored casing, a blue face, and white numerals.

This watch sports a brown leather band, a bronze-colored casing, a black face, and white numerals.

It’s all in the details

As an added bonus to the original design, this WW1-inspired watch has an added engraving of a Mark VII WW1 tank on the back of the watch. The updated design also incorporates the Lufbery logo on the crown, which was inspired by the British Army’s “broad arrow” that was on all of the British military equipment. 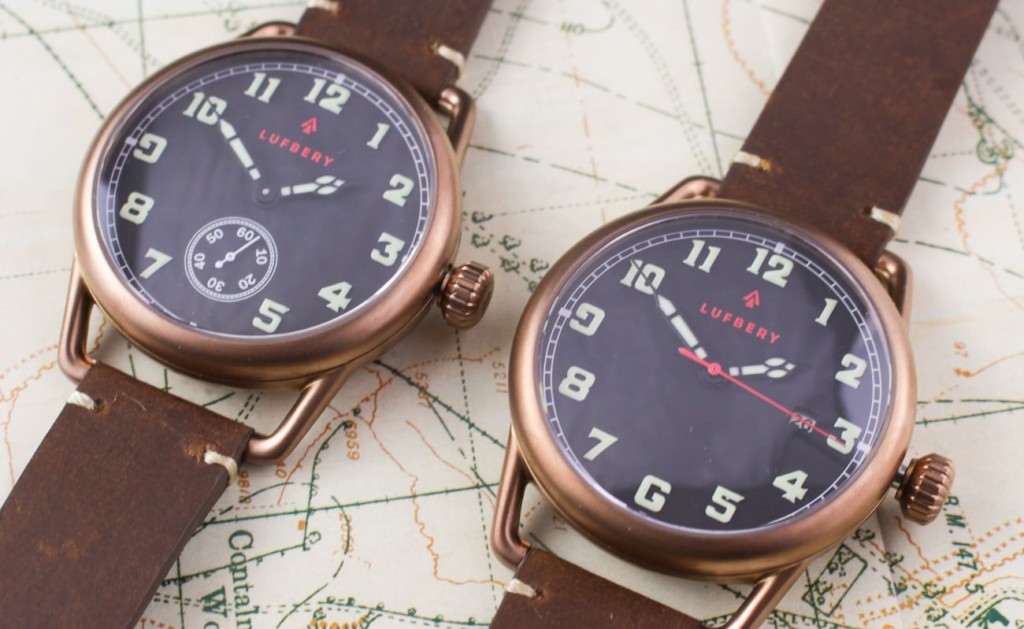 Pay homage to the past with this military watch

We love the attention that was put into all of the details to make this watch as accurate as possible. We love that the designer took some artistic leeway to create other color combinations that aren’t historically accurate but still provide purchasers with a beautiful watch.

What we would ❤️ to see

Because we love tech, we always love to see items paired with techology. It would be awesome to see this watch paired with tech to make it a smart watch or a watch with connectivity, perhaps a GPS locator in it.

Of course, any device can become a smart device, but by turning this piece into a smart device, you’d be taking away from the magic of it. Sometimes, “simple” is better.

Where to get your Lufbery Trench Watch

If you’re anxious to get your hands on this WW1-inspired watch, you can head over to Lufbery’s Kickstarter. It’s fully funded, so you’ll be sure to get your watch. If you’re a watch collector, a WW1 enthusiast, or are just looking for a rugged, masculine new watch, the Lufbery Trench Watch will meet all of your needs.

Tera has worked in the publishing industry since 2004 and considers the written word her first love. When she's not writing or editing, she's usually traveling, knitting, or binge-watching Netflix.
Join the Discussion
Popular Blog Posts
Smart workspace gadgets you need to add to your WFH setup Best PS5 external SSD drives out there for gamers Which drone should you buy in 2021? Must-have vacuums for home cleaning Apple Silicon Macs—should you buy the new Macs with the M1 chip?