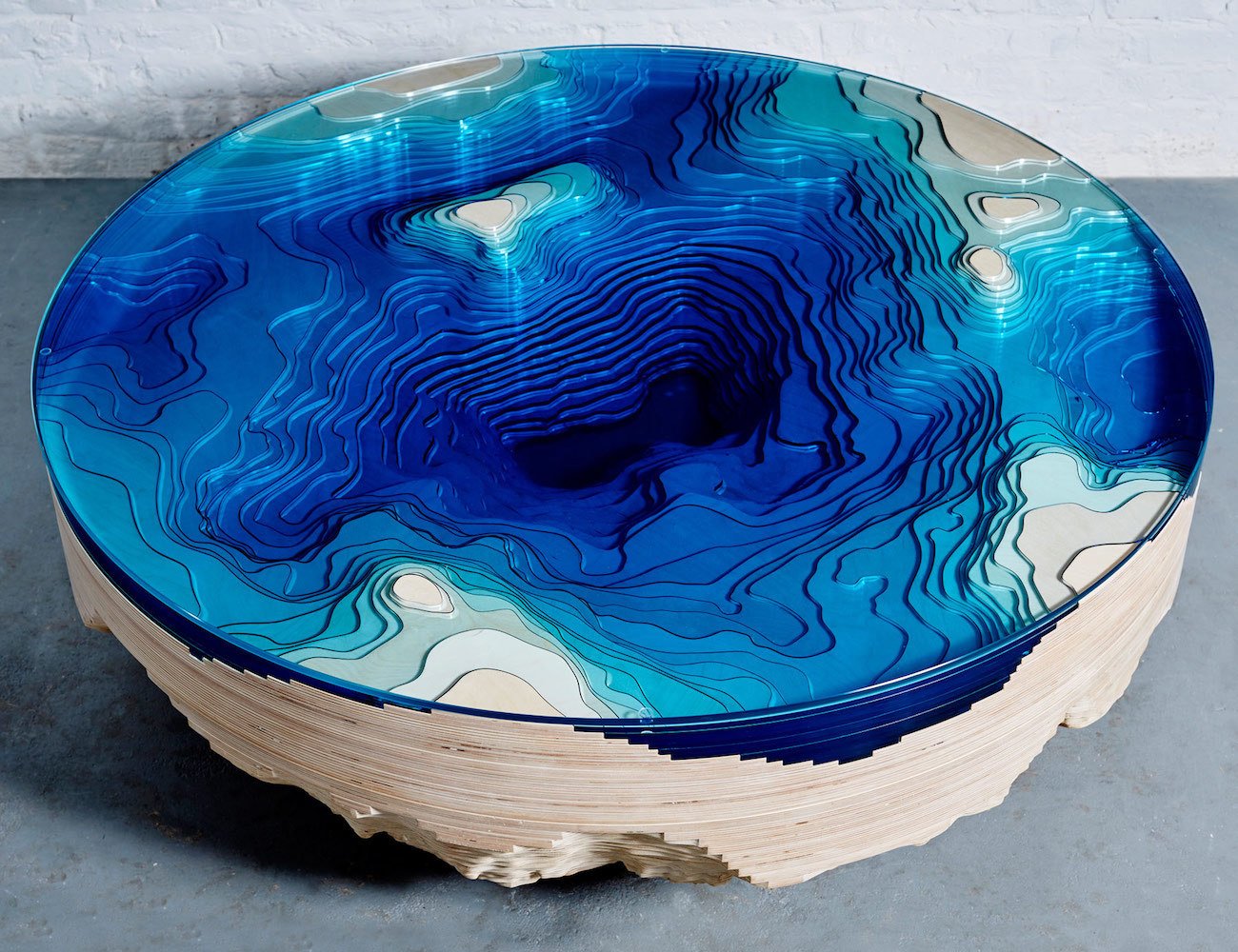 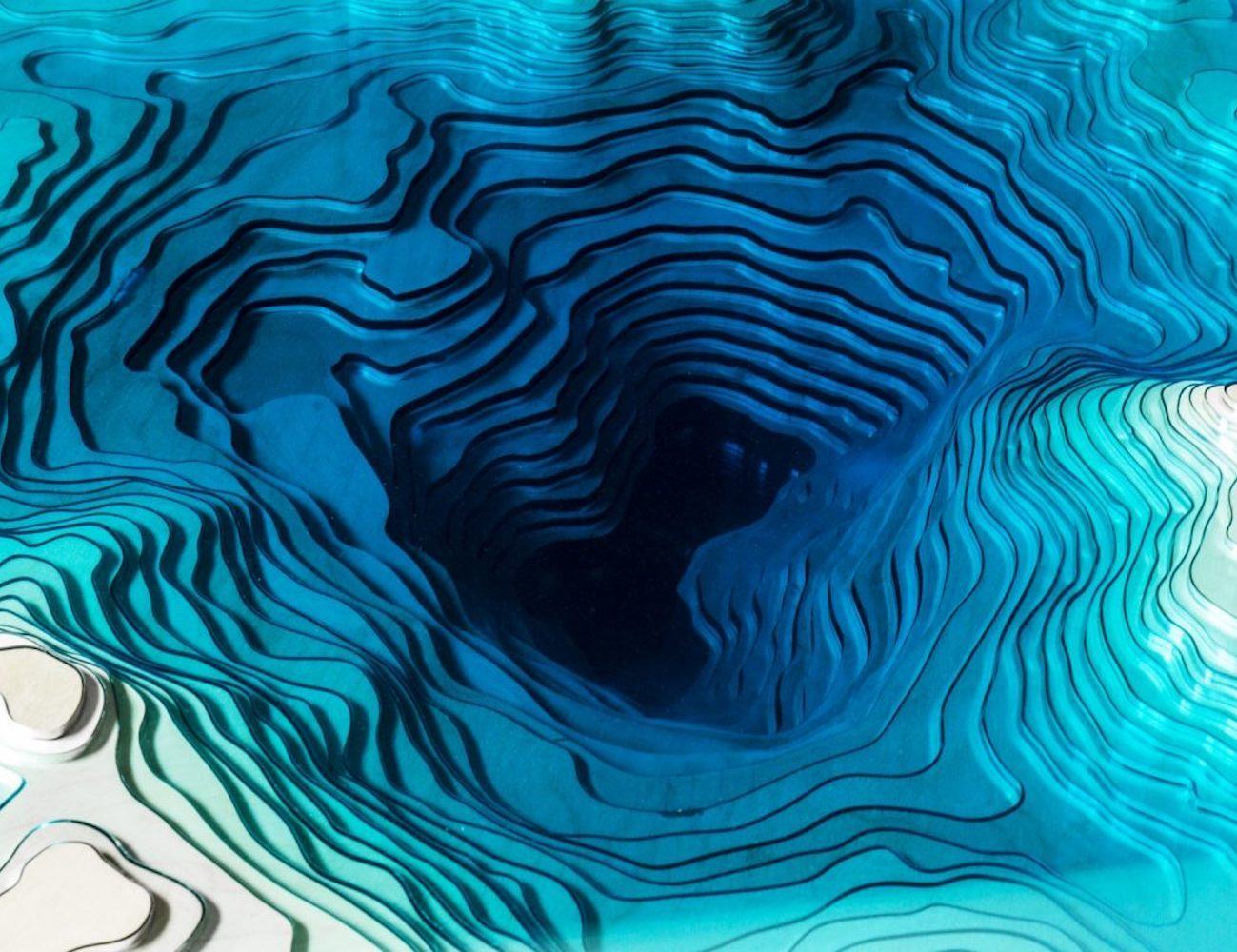 Duffy casts an eye into the ancient  – looking to the depths of the ocean to dream up a dramatic circular coffee table, which instantly takes the mind to stories of a flat earth, or disc world,  and introducing the..
Ashley Timms
HomeFurniture

Duffy casts an eye into the ancient  – looking to the depths of the ocean to dream up a dramatic circular coffee table, which instantly takes the mind to stories of a flat earth, or disc world,  and introducing the majesty of the big blue to the interior. As well as servicing you with somewhere quite impressive to place your cup of tea. Like all of Duffy’s designs, the Abyss Horizon is a conversation piece as much as a functional one. But while previous works play with gravity, this new design is concerned with depth and creates a geological cross-section as mesmerising as the sea. The design team spent a year developing the table in their London studio, experimenting with sculpted glass, Perspex and wood, arranged like a 3-D representation of a geological map, until they re-created something of the mesmeric abyss that had first captured Duffy’s imagination.

We simplify product discovery. This means you can find all the greatest gadgets in record time. As a technology company, our mission since 2012 has been to make it easy for you to discover quality products and stay updated with the latest trends.
Join Gadget Flow
What Is a Gadget?
It’s the gear you can’t live without: the smartphone you constantly check, the camera that goes on every vacation, and the TV for binge-watching and gaming. All the coolest gadgets owe their existence to a new technology that changed it all.
What Are the Types of Gadgets?
Gadgets include everything from phones like iPhone and VR headsets like Oculus to gaming consoles like PlayStation 5 and robots like Roomba.
What Gadgets Are Trending Today?
Mainstream gadgets include TVs, consoles, smart devices, cameras, headphones, and music devices. However, there are a ton of unique gadgets for fun, learning, and more. Here’s a full list of gadgets that are currently trending on Gadget Flow.
What Are the Top New Tech Trends?
Technology evolves every day, and some of the most popular tech trends include AI, robotic process automation, edge computing, quantum computing, virtual reality, blockchain, IoT, 5G, augmented reality, self-driving, big data, machine learning, and voice search.
About
Meet the Team The Story Press & Media Careers Brand Assets Status Contact Us Magazine
Resources
Help Center What's New Get the Apps Archives Authors Affiliate Program Sitemap Podcast
Services
Kickstarter Marketing Indiegogo Marketing eCommerce Marketing Agency Services Unboxing Services List your Product Facebook Ads Enterprise Solutions
Legal
Terms of Use Privacy Policy Cookie Policy Fact-Checking Ethics Policy Corrections Policy Privacy Shield SSL Security
From the Blog
Charge your Apple gadgets in style with this 3-in-1 leather wireless charger The best cold brew and iced coffee makers of 2022 Going on a vacation? Check out these must-have travel gadgets you can buy now
As Seen On
Let’s Connect
© 2022 Gadget Flow Inc, 26 Broadway, New York, NY, 10004, USA