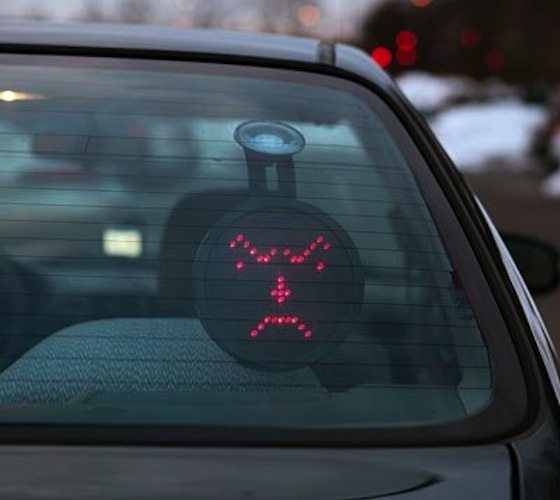 Emoticons are symbols that express emotions using punctuation marks and produce faces like this one. Although their origins date back to the previous century, it wasn’t until 1982 that a scientist proposed using them and in just a few months,..
Michael Cheng
CarCool Gadgets

Emoticons are symbols that express emotions using punctuation marks and produce faces like this one. Although their origins date back to the previous century, it wasn’t until 1982 that a scientist proposed using them and in just a few months, they became very popular among computer users. Who would’ve imagined that nearly 20 years later emotions would be used not just to communicate with our friends through email and SMS, but also to communicate with strangers on the road. This clever gadget is called the “Drivemotion” allows you to send messages to other drivers around you. Did that car just yield the right of way without asking anything in exchange? He deserves a smiley face or at least a Thanks. Is that truck blocking your access to the exit and honking at you? Don’t think twice about sending him a message to Back Off.

Get it forGet it for $50
Drivemotion LED Car Sign
Add Reminder
Add to Collection
Share it
Gadget Flow Rating 9.7/10
View Product Specs
Discovered on Sep 4, 2013, 8:00 am EDT
Discovered by Michael Cheng
Report this