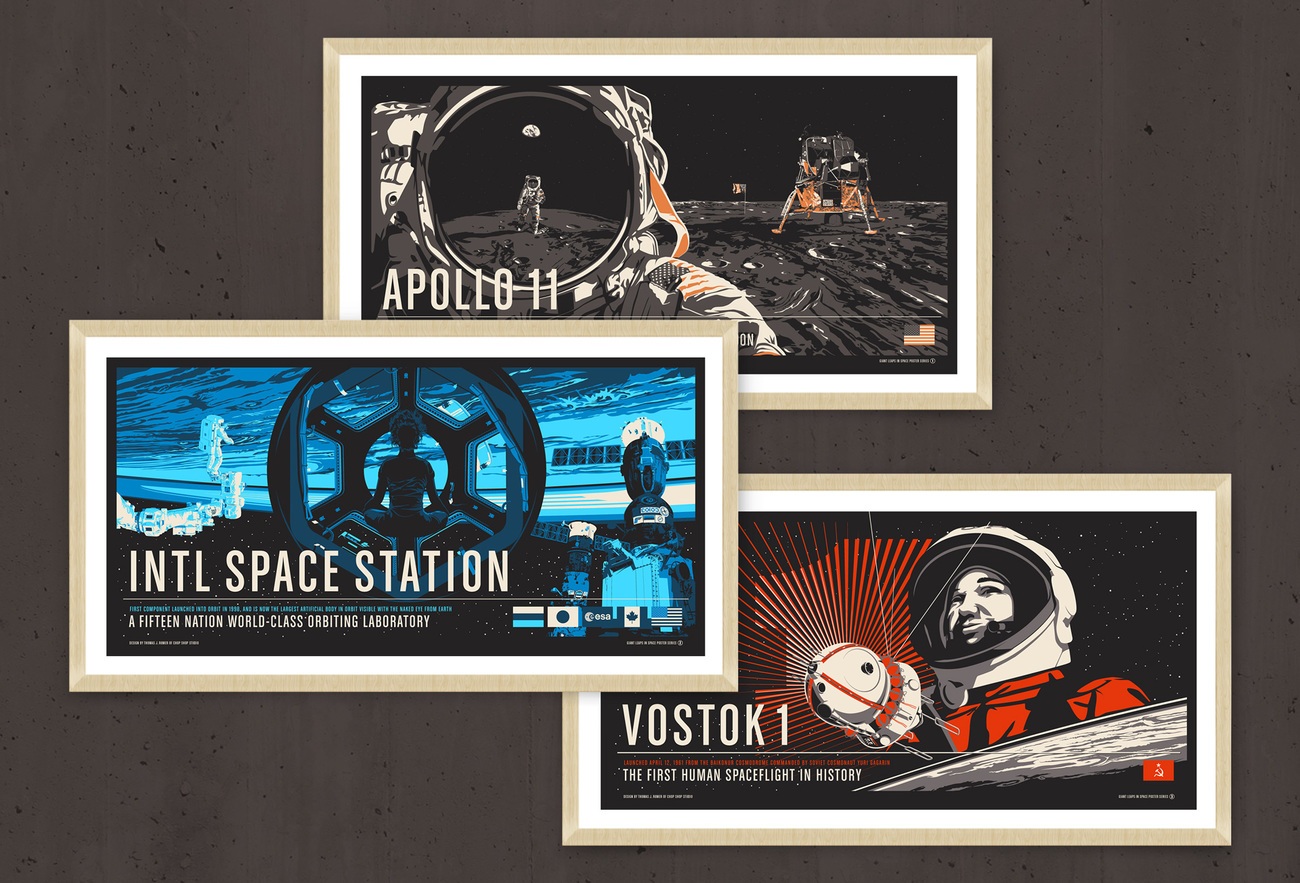 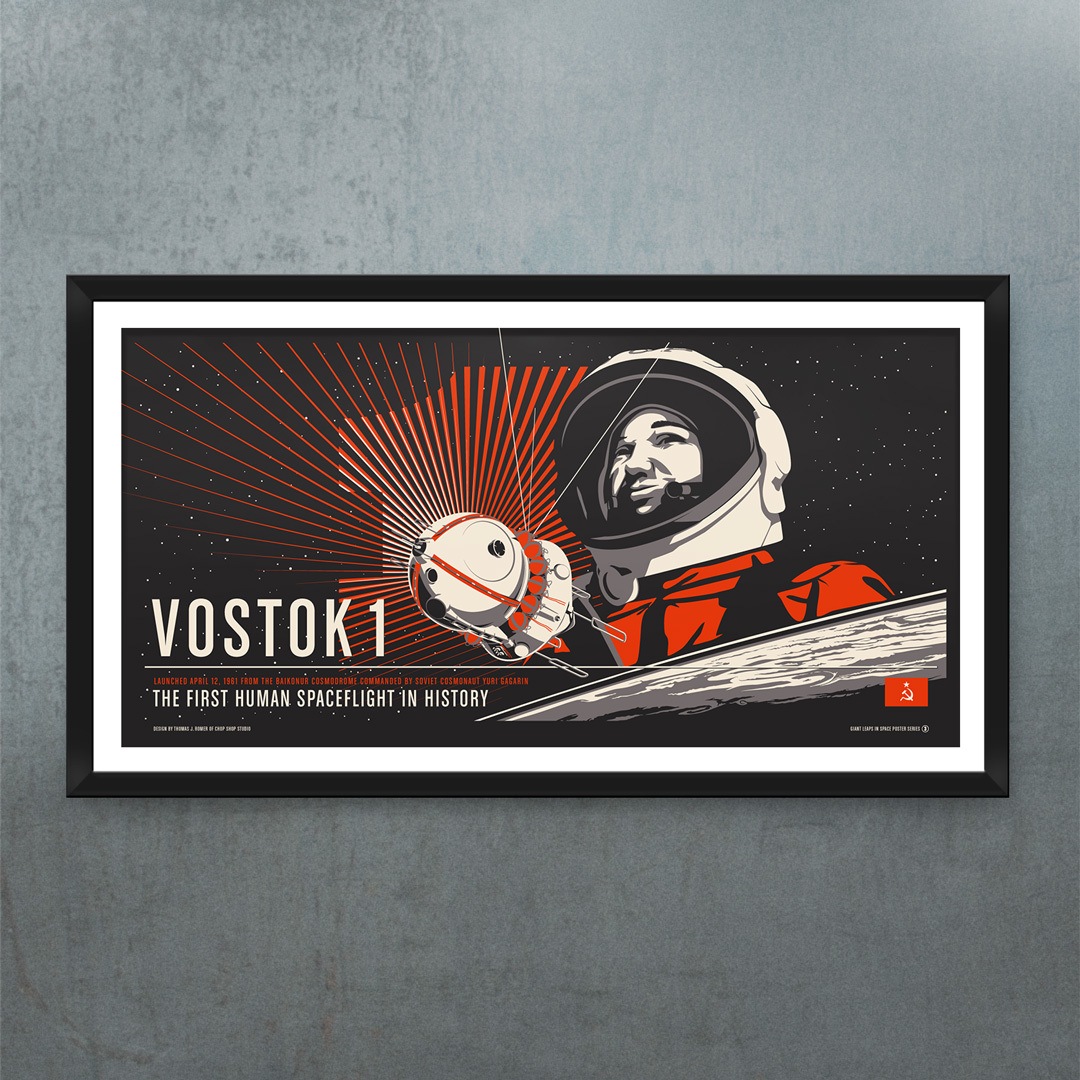 Take one small step to show your affinity for space missions with the Giant Leaps in Space Poster Series. Celebrating mankind’s space exploration, this series of posters captures key moments in history. The Giant Leaps in Space Series features three poster designs. These include Apollo 11, the International Space Station, and Vostok. The Apollo 11 poster showcases the moment Neil Armstrong and Buzz Aldrin stepped onto the moon in 1969. Additionally, the ISS poster displays the unity of 15 nations dedicated to space exploration. Finally, the Vostok, currently in the design stage, honors the first spaceflight in history. On this poster is the legendary Yuri Gagarin, the Soviet cosmonaut. In addition, the Giant Leaps in Space Series inspires you instantly to push the envelope and go where no man has gone before. Printed on 19×13-inch Red River archival paper, each poster measures 18 by 9 for only $29. Larger sizes, including a 36 x 18 hand-screen printed version for $55 are available. In addition to the prints, the Giant Leaps in Space Series features stickers, t-shirts, and even desktop and mobile wallpapers.

We simplify product discovery. This means you can find all the greatest gadgets in record time. As a technology company, our mission since 2012 has been to make it easy for you to discover quality products and stay updated with the latest trends.
Join Gadget Flow
What Is a Gadget?
It’s the gear you can’t live without: the smartphone you constantly check, the camera that goes on every vacation, and the TV for binge-watching and gaming. All the coolest gadgets owe their existence to a new technology that changed it all.
What Are the Types of Gadgets?
Gadgets include everything from phones like iPhone and VR headsets like Oculus to gaming consoles like PlayStation 5 and robots like Roomba.
What Gadgets Are Trending Today?
Mainstream gadgets include TVs, consoles, smart devices, cameras, headphones, and music devices. However, there are a ton of unique gadgets for fun, learning, and more. Here’s a full list of gadgets that are currently trending on Gadget Flow.
What Are the Top New Tech Trends?
Technology evolves every day, and some of the most popular tech trends include AI, robotic process automation, edge computing, quantum computing, virtual reality, blockchain, IoT, 5G, augmented reality, self-driving, big data, machine learning, and voice search.
About
Meet the Team The Story Press & Media Careers Brand Assets Status Contact Us Magazine
Resources
Help Center What's New Get the Apps Archives Authors Affiliate Program Sitemap Podcast
Services
Kickstarter Marketing Indiegogo Marketing eCommerce Marketing Agency Services Unboxing Services List your Product Facebook Ads Enterprise Solutions
Legal
Terms of Use Privacy Policy Cookie Policy Fact-Checking Ethics Policy Corrections Policy Privacy Shield SSL Security
From the Blog
New tech gadgets you can buy sooner than you’d think The ultimate holiday gift guide: best stocking stuffer gadgets to buy for under $100 Best eScooters and eSkateboards to buy for daily commuting
As Seen On
Let’s Connect
© 2022 Gadget Flow Inc, 26 Broadway, New York, NY, 10004, USA