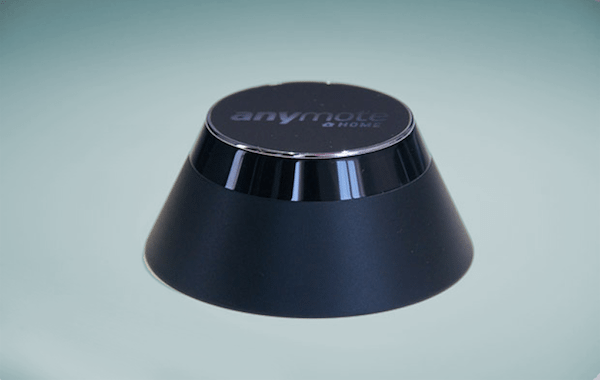 Initially, the invention of the remote control was a great thing. Well, it made life a little lazier, anyway. But now that every single electronic device can be controlled from afar, things have become complicated — either you have to cover your stylish coffee table with remotes, or you have to get one of those terrible all-in-one offerings. Now, there is a third option. The AnyMote is an adaptor that turns your smartphone into a remote control for virtually everything.

That sounds like a ridiculous overstatement, I realize, but this Kickstarter project is compatible with more than 800,000 appliances. For a product that isn’t even on the shelves yet, that seems pretty remarkable, but it can actually be attributed to the clever use of regular, everyday tech. In essence, the AnyMote is a small, round Bluetooth 4.0+ receiver that is equipped with infrared. With the accompanying app (Smart IR) installed on your phone, commands can be delivered to the AnyMote via Bluetooth, and then forwarded to the device using infrared. As a result, most devices that come with a remote should work with the AnyMote, including DSLRs.

This system comes with numerous advantages. Apart from the convenience of adaptable on-screen controls, and only one handset to keep tabs on, the use of Bluetooth means that commands can be delivered from some distance away and without a clear line of sight. The main constraint is that the AnyMote itself must be within infrared range of the devices you want to control. However, the AnyMote’s four IR transmitters are fairly powerful, and between them, they can beam signals through 360º. The two AA batteries which power them are good for 2700 commands, as well.

Furthermore, the Smart IR app comes with the “smart” tag for good reason. Using IFTTT-like rules (integration with that service is planned), the app can control your appliances based on your phone’s current status. An incoming call can automatically trigger muting of your TV, for instance, or your arrival home will be accompanied by your air con switching to a comfortable temperature.

Given all of that functionality, it’s not terribly surprising that AnyMote is already fully funded via Kickstarter, but having blitzed past the original target of $50,000 with 36 days remaining, I can see stretch goals hoving into view. The first — when $100,000 is reached — will be the development of a wall/ceiling mount. With the main funding in place, though, AnyMotes should start shipping to backers who pledge $70 upwards, in May next year.

For more info, check out the Kickstarter project or the official website.