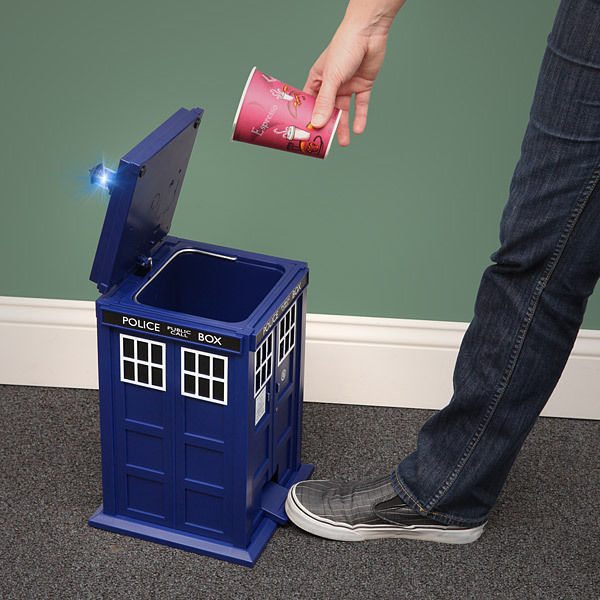 The Doctor Who TARDIS Wastebin from ThinkGeek is designed for people who need a waste disposal bin that’s bigger on the inside than it looks on the outside. It’ll appear to be an ordinary waste bin on the outside, but..
Tera Cuskaden
Home

The Doctor Who TARDIS Wastebin from ThinkGeek is designed for people who need a waste disposal bin that’s bigger on the inside than it looks on the outside. It’ll appear to be an ordinary waste bin on the outside, but it’s got so much capacity on the inside that it’ll keep taking all your trash while other same-sized bins explode or start overflowing. The bin even has lights and sound effects. Press the pedal to open the lid, and the Police box light comes on and you’ll hear the TARDIS materialization sound. Close the lid, and the dematerialization sound starts playing. If you don’t want a trash can that’s trying to act like a juke box, you can turn the sounds off.

Get it forGet it for $49
Doctor Who TARDIS Wastebin
Add Reminder
Add to Collection
Share it
Gadget Flow Rating 9.4/10
View Product Specs
Discovered on Jan 21, 2014, 8:00 am EST
Discovered by Tera Cuskaden
Report this