This smart tabletop game offers you an innovative gaming experience

Enjoy hours of fun with game pieces that feature AI learning. This smart tabletop game system responds to your touch, communicates with other pieces, and learns from the other pieces. Use your Blinks to play some of the most innovative games you've ever seen. 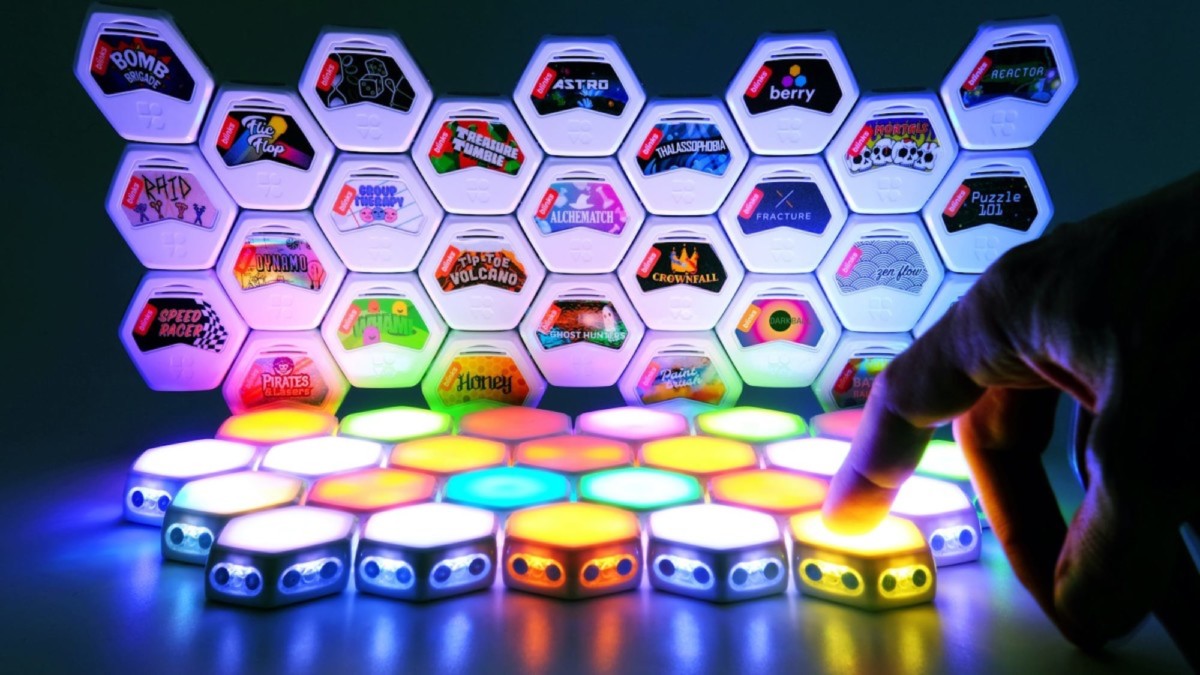 Blinks by Move38 smart tabletop game system in the dark

If you’re looking for a cool new addition to your game cupboard this winter, you’ll want to consider the Blinks by Move38 smart tabletop game system. This smart tabletop game is unlike anything you’ve ever played because each piece knows a single game and communicates with its neighbors to help you play. This system provides hours of analog and digital fun, something that’s especially useful on those weekends when you’re snowed in and can’t muster the energy to shovel your walkway.

The Blinks are hexagonal game pieces that fit in your palm. Each one responds to touch, communicates with its neighbors, and is magnetic. Each Blink also knows one game and teaches you and the other pieces how to play. According to the company’s Kickstarter page, it’s easy to get started. Simply grab your Blink, choose your game, and link them together to start playing. Each activity plays well with the other Blinks out of the box. And the more Blinks you add, the more challenging and fun the games get. This tabletop game includes nine Blinks, nine games, two Sushi Roll Cases, and an instruction book. 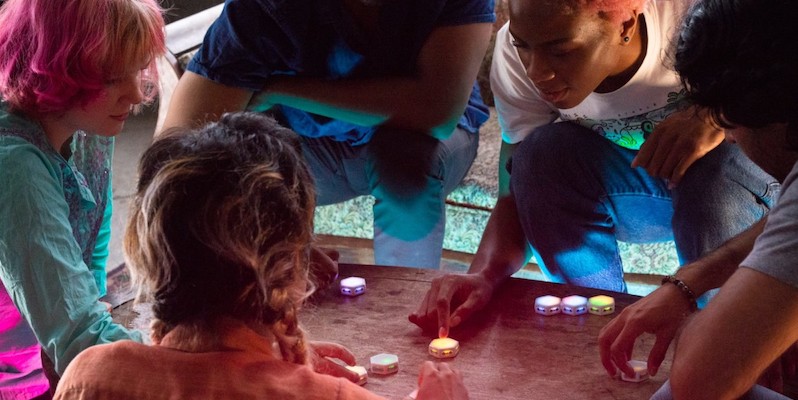 What games are included?

The Blink by Move38 smart game system includes nine games. You can read the descriptions of each below. 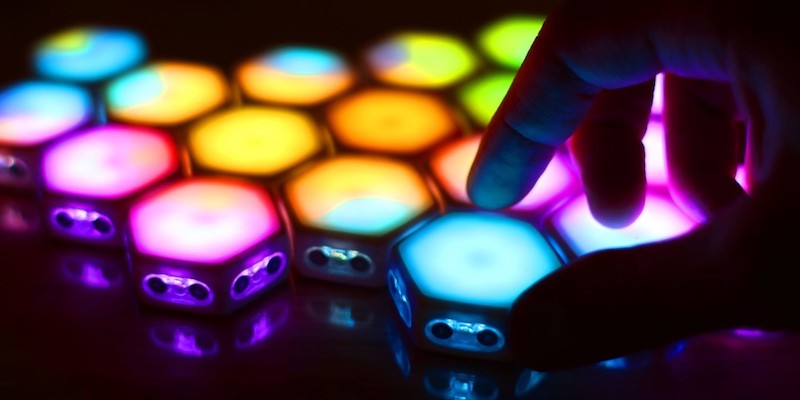 You land on an astroid filled with rich space ore. Can you collect enough of the material to fill your spaceship before the competition?

Put your ping pong skills to the test with Darkball, another cool offering on this smart table game. You’ll play against a speedy disappearing ball and your fellow players.

This game pushes you to get the Blinks together because, as the Kickstarter page says, extroverts want neighbors, but introverts need their space. You’ll love the focused frenzy for one or many.

Throw your Blinks at a vault to break it open and take the gold that’s locked inside. It’s like Crokinole but for crooks.

This game tests your strategy skills. Your Blink pieces act as both brushes and canvases. 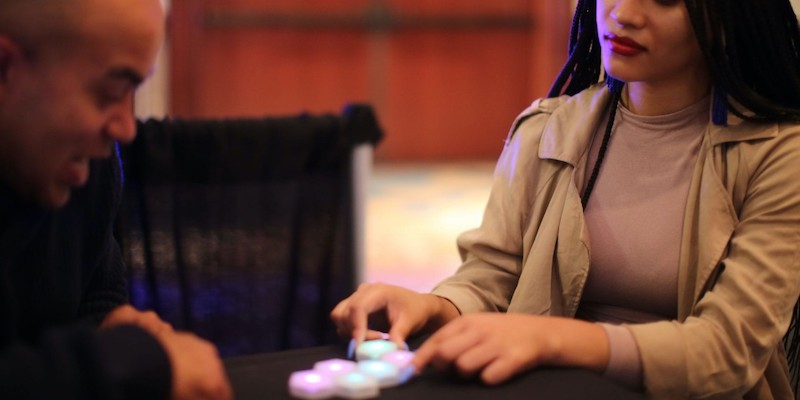 Work solo or with friends on these challenging puzzles that are endless and self-generating.

WHAM is a smart tabletop game that lets you play Whack-A-Mole at any scale, arrangement, and for any number of players. Imagine playing the classic amusement park game on a much larger and moveable playing field.

Widgets will upgrade your game night. It lets you use your Blinks even when you’re playing other games. Blink’s Widgets can serve as your dice, coin in a coin flip, and wheel of fortune. The inventors have also created four new games that use widgets: Takeway Dice, Spinomino, Flip Bet, and Topple Stones.

For those times when you need a relaxing game to take care of your mental health, there’s ZenFlow. This relaxing game mesmerizes you with swirling colors and patterns, so you can find your zen.

And you can keep the fun times rolling with the Epic Adventure Expansion. Blinks teamed up with creators like Big Potato Games to bring you six new game designs. The set includes six Blinks, six games, one Sushi Roll Case, one Blinks Sticker, and an instruction booklet.

Bet and bluff without stepping on lava in Tip Toe Volcano. This smart tabletop game is a bidding war to determine who can tip-toe the farthest around the volcano without touching the lava.

In Blinks’ first true cooperative game, you’ll work together with other players to hunt ghosts with your flashlight and hunt evil spirits from the mansion. When the apparitions reveal themselves, you and your friends work together to make them disappear.

Match the correct potions to create a magical brew in Alchematch. It’s a chain reaction that’s fast-paced and fun.

You have to stay in the arena to remain in the game. Two teams are on a battlefield, but only one can win. Create an army with your Blinks to take on your opponent and protect the crown.

You’re an archeologist who discovers an ancient treasure chamber. Stack ancient mechanisms to redirect the falling treasure. Collect as many artifacts as you can before it all crashes down.

After your oxygen tank leaks while you’re exploring an underwater grotto, you only have six minutes of air left. Can you find your way out of the underwater maze and make it to the surface in time? 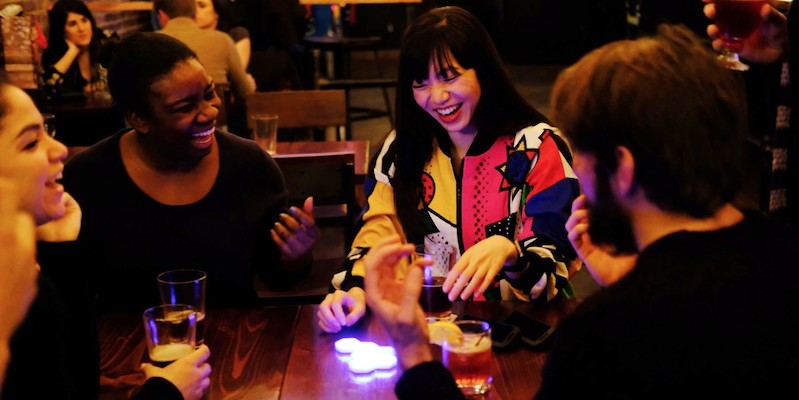 As you can see, there are some very cool games you can play on Blinks. You’ll be happy to know that the pieces are durable and drop-tested in the same factory that produces LEGOs. Blinks are also water-resistant, which means you don’t have to worry about playing with them next to food and drink. Finally, each Blink is powered by a cr2032 coin cell battery and should provide over 40 hours of active gameplay.

Overall, Blinks are fun, AI-powered game pieces that respond to touch and communicate with each other. Each piece knows its own game and can learn new ones. It’s a smart tabletop game that makes a great gift for any game enthusiast.

The Blinks by Move38 smart tabletop game costs $79. You can preorder yours on Kickstarter. Don’t forget to share your thoughts on this gaming set in the comments.

Lauren has been writing and editing since 2008. She loves working with text and helping writers find their voice. When she's not typing away at her computer, she cooks and travels with her husband and two daughters.
Join the Discussion
Popular Blog Posts
10 Best tech gadgets you need in your life Must-have smart desk gadgets and office accessories Best PS5 external SSD drives out there for gamers Which drone should you buy in 2021? Must-have vacuums for home cleaning