Work productively anywhere you go with the Splay display and projector. It's a 24.5-inch screen and an ultra-short-throw projector in one useful gadget. 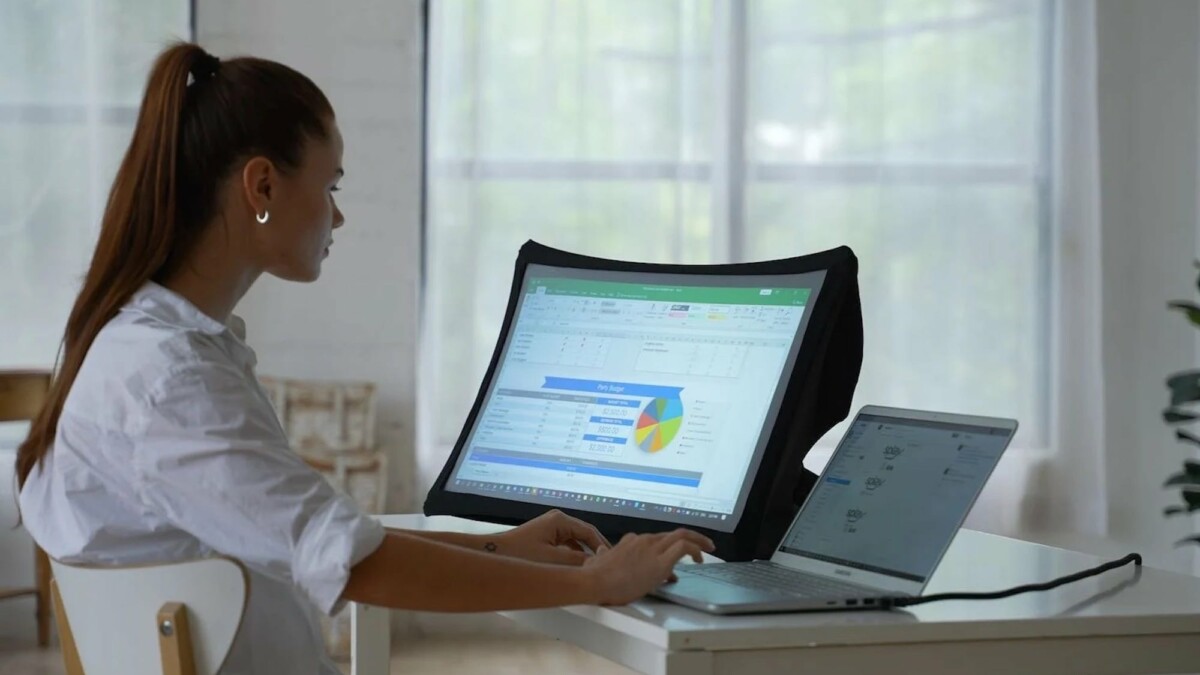 Splay as a laptop display

Get extra screen space and a projector for your on-the-go work with the Splay display & projector. This expandable display and projector sets up in seconds, giving you a 24-inch screen you can take anywhere. It makes working at the coffee shop, a hotel lobby, and even your parents’ house a little easier.

As long as you have a stable internet connection, you can work from anywhere, right? Well, that might not be the case if you’re used to a wide desktop screen. In that case, switching to a laptop can really slow you down.

But the Splay display & projector changes that. This versatile display gives you extra screen space and even turns into a projector that you can use for meetings or movies.

Check out the display mode

Need a large screen for your work? With Splay, you can have a 24-inch screen with you wherever you go. That way, you won’t be stuck with a 16-inch laptop. Even better, it also connects to smartphones and gaming devices. Weighing just 2.5 pounds, it’s easy to carry.

This mode has a long battery life

You’ll also be happy to know that this gadget’s display mode has a respectable battery life. It can work for up to 4 hours on a full charge, and you can use it as a power bank.

The screen is beautiful

Also, with this expandable display and projector, you won’t sacrifice quality for portability and flexibility. In fact, the screen is bright, boasting 800 nits of brightness. Then, with the 1920 x 1080 FHD quality, it gives you premium images.

The HDMI port connects to your devices

What’s more, the Splay display & projector connects to any device via an HDMI cable or wireless adapter. So this display is pretty versatile.

But, as you know, this gadget isn’t just a display. It’s also an ultra-short-throw pico projector, letting you take cinema-sized movies on the go or show off your work at a meeting.

You won’t have to worry about blurry images with this expandable display and projector. With its bright, 1920 x 1080 high resolution, you get bright, high-quality images you’ll be proud to project.

An 80″ screen size comes in handy

If you want to game while traveling or create a cinematic atmosphere while watching a movie at a friend’s house, the projector mode comes in handy. Its 80-inch screen is impressive and lets you enjoy your content on a grander scale.

The ultra-short-throw projection is great for small spaces

Meanwhile, since this Full HD pico projector boasts ultra-short-throw projection, you don’t need a lot of space to use it. That’s right, this projector gives you an 80-inch screen even when it’s close to the wall.

Learn about the 3 patented technologies

The Splay display & projector relies on three cutting-edge technologies, which all have patents. They make this computer accessory stand out from similar products in the field.

The display material is flexible

When you collapse this expandable display and projector, you don’t have to worry about wrinkles or creases, which is pretty cool. That’s thanks to the flexible display material, which folds and expands in all directions.

We already mentioned the ultra-short distance projector briefly, but let’s revisit it. With the Splay’s patented projector, you won’t have to hunt around the room or building for the ideal projection spot.

It projects bright, clear images when it’s just inches away from your wall. That way, even small spaces become screening rooms.

The ruggedized arms set up quickly

Traditional projector screens can be a real pain to set up. Some take up to 10 minutes to construct and position properly. But, thanks to the Splay display & projector’s retractable arms, you’ll be ready to go in seconds. Because no one wants to struggle with their tech minutes before their big presentation.

This expandable display and projector is the item you want in your collection of portable work gadgets. It sets up in seconds and provides a bright 24-inch display as well as an ultra-short-throw projector. Yes, you really can have all the tools you need to work anywhere, and this cool gadget proves it.

Interested in the Splay display & projector? You can preorder it for $674 on its Kickstarter campaign. What are your favorite gadgets for on-the-go work? Let us know about them in the comments.