Do you need one of these foldable screen gadgets?

With the re-launch of the iconic Motorola razr and some of the CES 2020 product announcements, we have foldable screens on the brain. Smartphones, tablets, laptops... More and more companies are creating products featuring this tech, and they're not just a far-off concept anymore. But how does the tech work, and does it stand up to the hype? 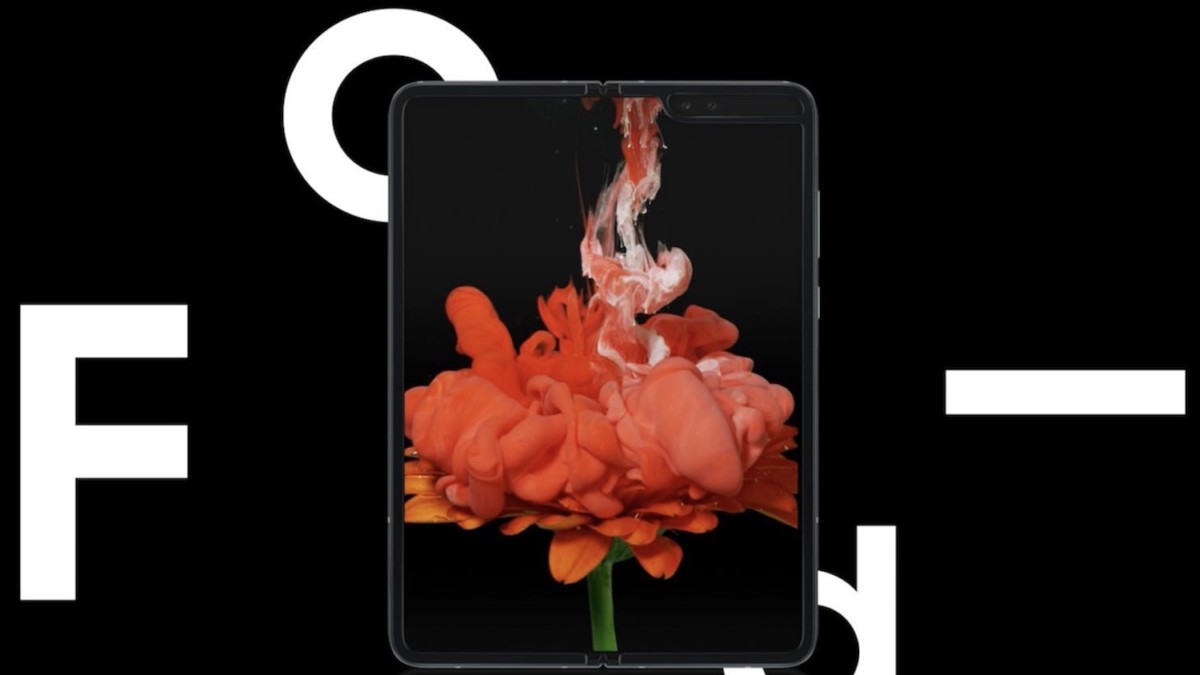 Foldable screens are here. They’re a thing we can have and hold and show off to our friends. And if the Motorola Razr selling out before it even releases is any clue, they’re going to be big. Companies have been working for a long time to get the tech right, and gadgets with folding screens are finally starting to hit the market.

What are the benefits of a foldable screen?

First and foremost, one of the biggest benefits is size. Forget about how it looks cool, and how it’s a great example of how far tech has come. You can have a phone that is the same size or smaller than you have now but with twice as big of a screen. That’s amazing.

Another great benefit is that a foldable device acts as its own screen protector. When it’s folded, you can throw it in your purse or bag and not worry about scratching the screen on all the stuff you have rolling around in there.

What are some of the downfalls of foldable screen devices?

One of the biggest things to consider is battery life. Sure, batteries have come a long way, but with twice the screen to power, you need a larger battery. That’s definitely something to take a look at and think about when you’re perusing wireless foldable gadgets.

Getting the display right has proven to be a bit tricky. Many of the early Galaxy Fold reviews dinged it for being too fragile, and some of the newer reviews are saying the same thing, like this hands-on review from Digital Trends. We’re used to solid glass screens, and getting used to a screen made out of a bendable material might take some getting used to.

The price is also a huge factor. A lot of the foldable devices out there are still expensive since the technology is still relatively new. Companies have had to manufacture the devices differently from what they are currently producing, so you lose a lot of that mass-market lower-cost benefit.

Is buying a foldable device the best move for you?

Reviews are definitely mixed. CNET has a great round-up of information and links in this article. And reviews on the Galaxy Fold were are first poor, and now mixed as well. A lot of the reviews seem to depend on what the user’s specific wants are. If you have the money to spend on a new gadget, why not? At the end of the day, this is a decision that you’ll have to make based on your expectations of the device—and your wallet. We don’t recommend buying anything without looking at hands-on reviews and weighing the pros and cons of those reviews.

In the meantime, no matter which side of the fence you fall on, we can all agree that they’re pretty cool and push technology further.

The Motorola Razr V4 Folding Smartphone is a new iteration of the company’s famous early folding phones. With the original hinged design, this smartphone isn’t quite vintage: it actually has a folding OLED display. When completely open, the screen offers a wide aspect ratio perfect for watching movies—and the hinge is completely hidden. The main screen on this Razr smartphone is 6.2 inches, while the external display is about three inches in size.

Imagine a PC that’s truly foldable. The Intel Horseshoe Bend aims to be exactly that. The concept foldable PC is a step forward in mechanics, featuring a much larger screen and a sleeker, thinner profile. The Horseshoe Bend has a massive, 17.3″ screen that’s excellent for endless scrolling. There’s even a kickstand so that you can prop it like a desktop monitor. Additionally, you can work on the timeline where a keyboard would normally be. You can type via the on-screen keyboard, but there’s always the option to attach a wireless one if that’s more your style. 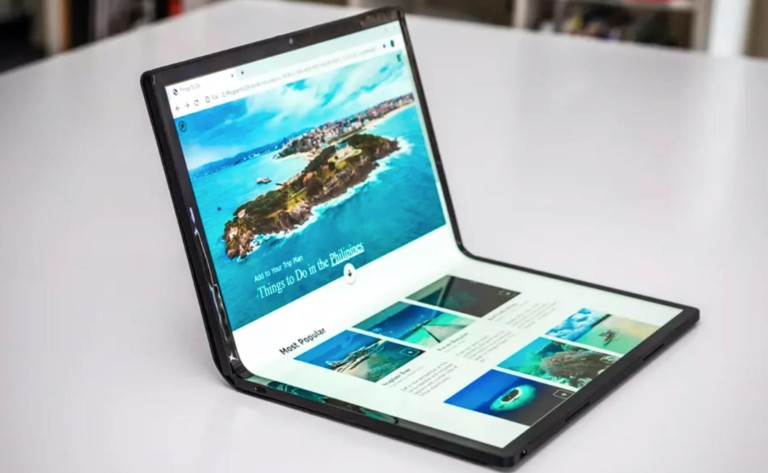 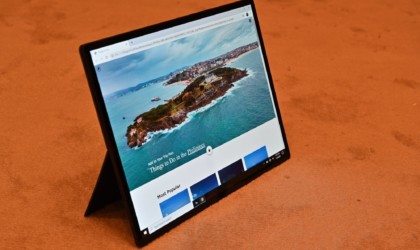 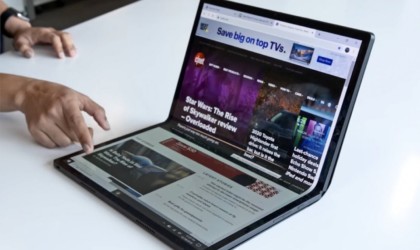 The Dell Concept Ori Foldable Seamless Tablet expands the bounds of what tablets are. Rather than offering two screens, this is a single-screen device that folds like a book. With 13 inches of usable space, this foldable tablet bends in the center of the screen. However, if you want to use the two sides separately, you’re able to do so. That allows you to use one half as a keyboard and the other half as a screen. And because it folds up like a book, you won’t have to worry about the Concept Ori screen getting dinged in a bag. 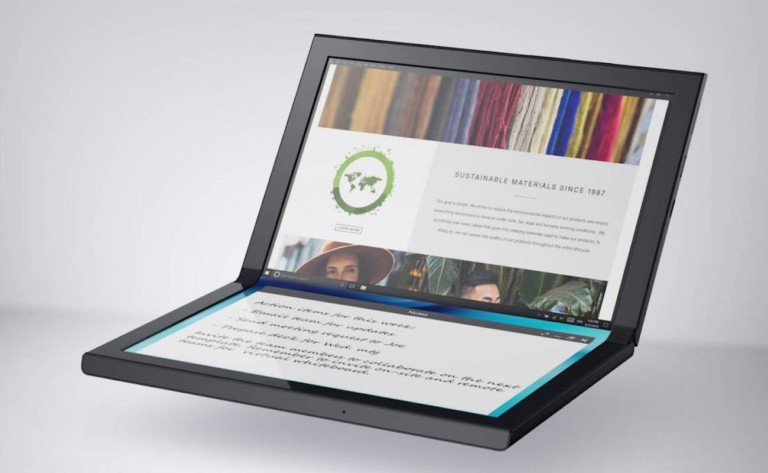 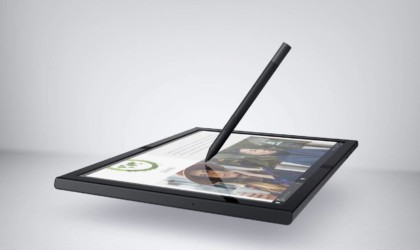 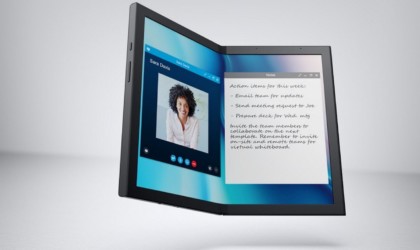 It may not boast two screens, but the Lenovo ThinkPad X1 Fold Foldable PC does something else. This single-screen device folds up to the point where it looks like a book or journal. So when you’re not using it, its screen stays protected in your bag. When you’d prefer to use two separate screens, like a book or laptop, each one is 9.6 inches. With an Intel Core processor inside, the X1 Fold also uses the Windows 10X operating system. Pair this with the fact that it’s built with 5G connectivity, and this is the computer that ensures you’re always connected.

Do more with your phone with the Samsung Galaxy Fold Smartphone. Featuring a slim body and slim bezels, this device unfolds to turn into a tablet. When the Samsung Galaxy Fold Smartphone is not completely folded back, both the back and front screens are illuminated. Using the Infinity Flex Display, the dual-screen smartphone offers a larger display than previous models. When folded, the smartphone shows selected information on a hidden display. Likewise, this prevents you from having to unfold the device each time you receive a notification or text. The foldable smartphone is also compatible with the S Pen. 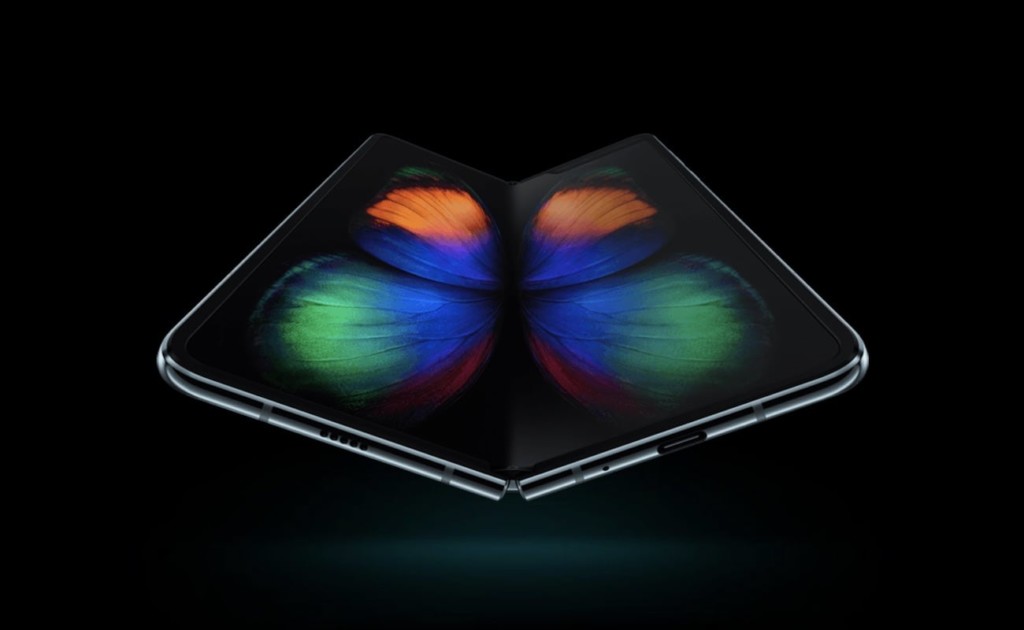 Use your device as a smartphone or tablet with the Huawei Mate X Foldable 5G Smartphone. Featuring an innovative folding design, you can use this device in its folded form for regular smartphone tasks. Likewise, you can unfold the Huawei Mate X to enjoy a larger screen for entertainment or multitasking. Simply unfold the foldable 5G smartphone to reveal an 8-inch tablet, providing almost twice as much viewing area. With its flexible display, the soft screen is capable of bending and stretching. 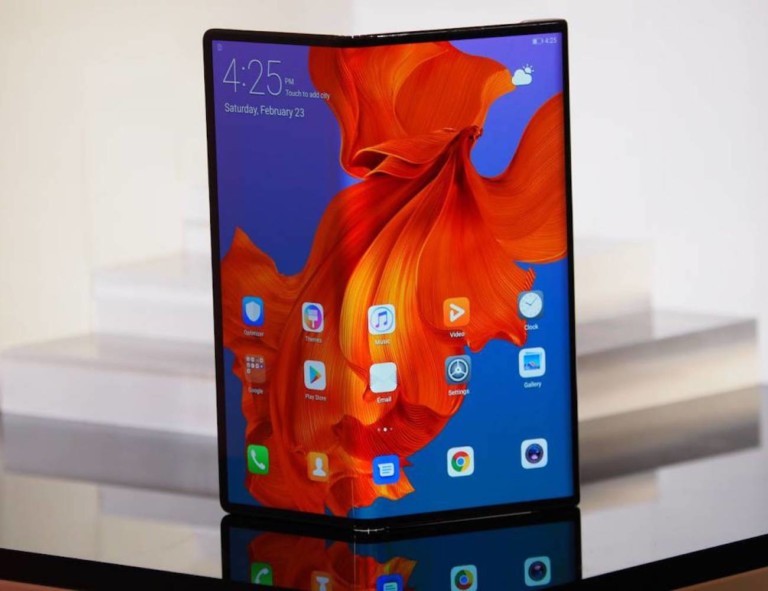 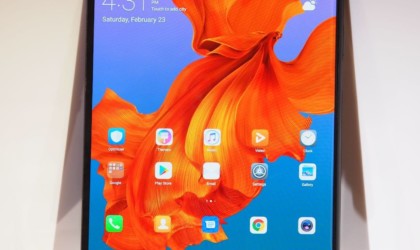 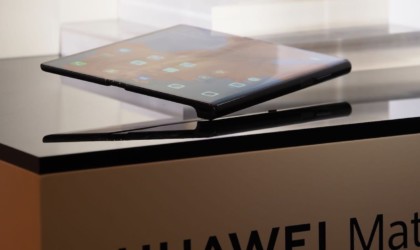 With its 360-degree hinge, the Microsoft Surface Neo Dual-Screen Folding Tablet offers a great multitasking opportunity. Keep the Surface Neo tablet closed or open like a book when you’re ready to work. The dual LCD Gorilla Glass display is durable, so you can toss it in your backpack before class. It’s easy to hold the folding Surface Neo, as it has a natural book-like grip and is just 5.6 millimeters thick. Furthermore, this tablet weighs only 655 grams though it includes a full trackpad and offers full-screen scrolling. Get ready for this small productivity machine available in late 2020. 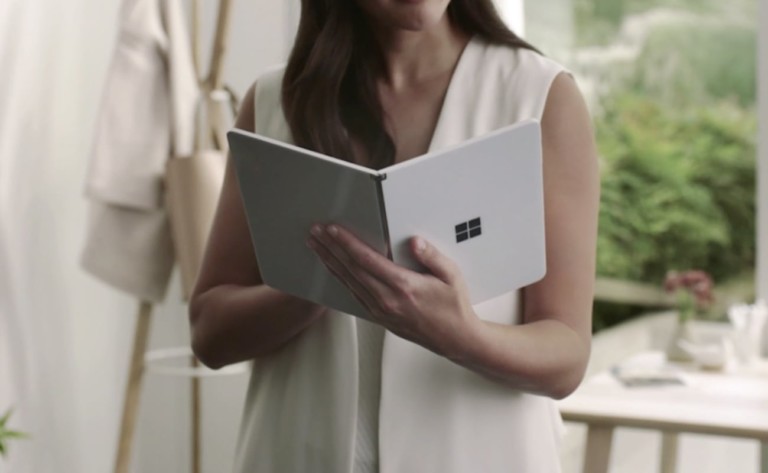 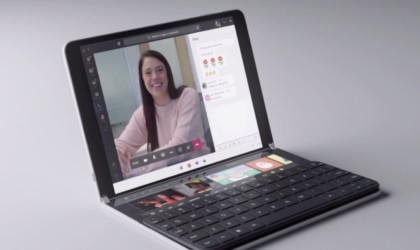 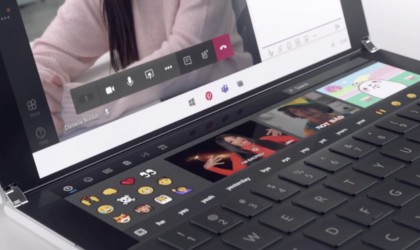 LG G8X ThinQ Smartphone with Dual Screen has a 360° hinge

Unfold the future of smartphone technology with the next-gen foldable design of the LG G8X ThinQ Smartphone with Dual Screen. Offering multiple display options, this smartphone allows you to view two screens at once with a snap-on display. You can either choose to adjust it as a viewfinder or use it as a stand for watching content on the go. For those who love gaming, this can be a true gamechanger. While one screen can help you visualize the game world, the other can function as a full-featured game controller. Additionally, you can also the dual-screen to make your video calls more interactive. 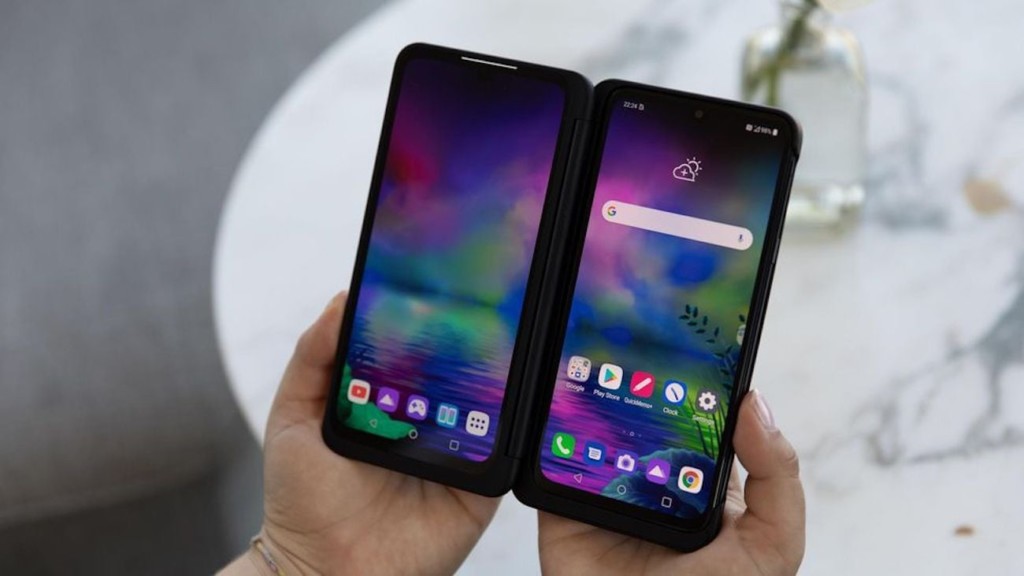 While the tech still has a long way to come before we see it used every day, it’s still pretty darn amazing. And it makes us excited about everything we’re going to see in the future. If this is what’s out there now, can you even imagine what we’ll have in twenty years? So, have you decided on if you’re going to get a foldable screen gadget now, if you’re going to wait, or if you’re going to pass? Let us know in the comments.