9 Gesture control devices you need to see to believe

Want to be on the cusp of new and exciting technology? Look no further than gesture control devices. Interpreting movements into action, this gives you an entirely new way to interact with devices. 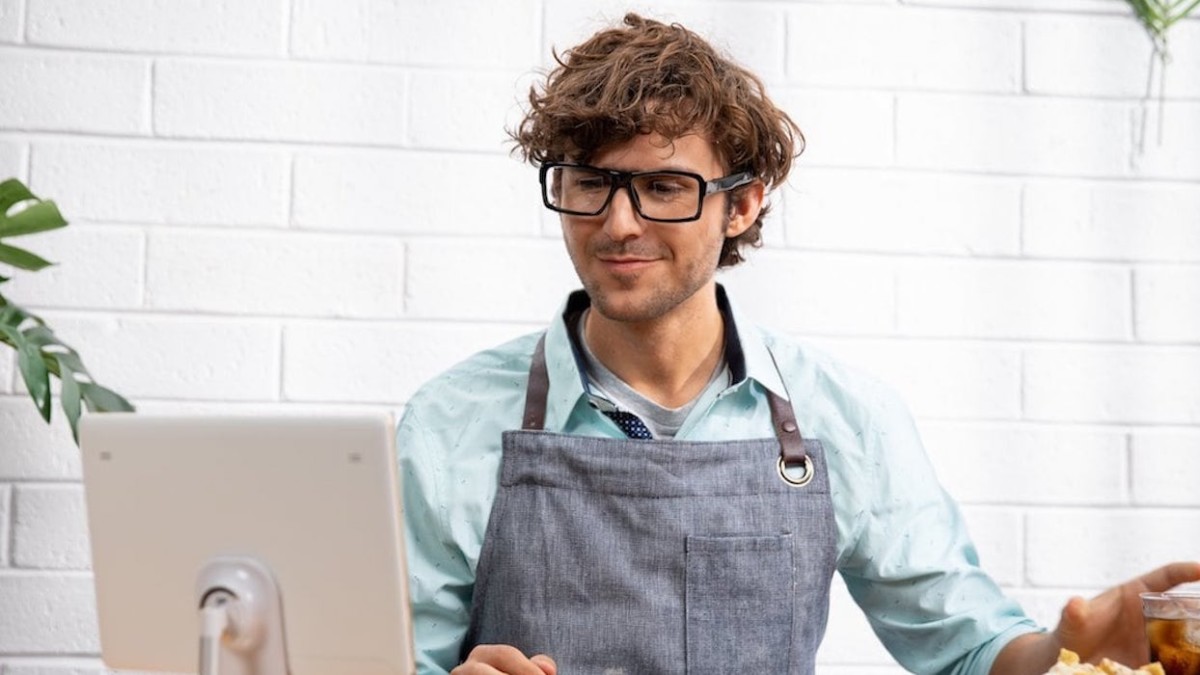 When touchscreens first became popular, it was an exciting new technology. Now, even the ATM has a touchscreen; as does the gas station display, McDonald’s ordering kiosks, airport check-ins, and more.

We’re starting to see the much-anticipated gesture control feature pop up in new devices every day. Perhaps this technology will become the new touchscreen; it will soon so be so ever-present that it doesn’t make us think twice. But for now, we’ll continue to marvel at its impressive functionality.

What is gesture control?

Gesture control allows a human to interact with a device without touch or audio. Instead, the device can detect and decipher movements or actions and translate them into functions.

How does gesture control work?

Each gesture control device has to have a motion sensor in order to detect the movement. Also called gesture recognition, there’s also a clever camera the can capture the movements in detail, allowing the device to process them.

Are you convinced yet that you need to jump on this tech trend? Check out these gesture control devices that you really need to see to believe.

When you imagine the futuristic technology of gesture control, something like the HiiDii Glasses may cross your mind. But unlike your imagination, these glasses are real. Tracking the blinks of your eyes, these glasses let you control your computer, smartphone, or tablet. Incredibly, the powerful sensor inside can detect blinks seamlessly. Even more incredibly, it can differentiate an intentional blink from a spontaneous blink. You can click, drag and drop, and scroll, all in the blink of an eye. 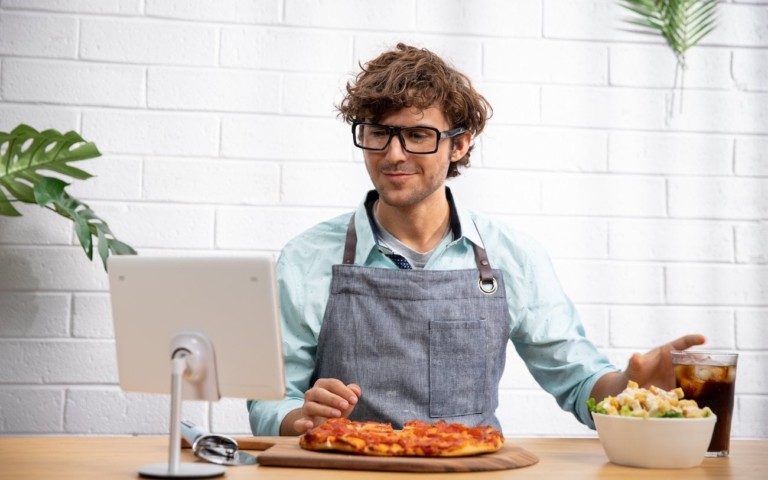 HiiDii Glasses translate blinks into actions on your device 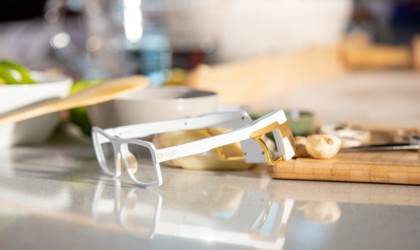 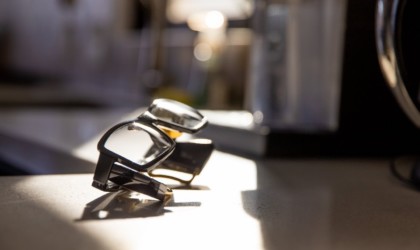 When the original Tap Strap debuted, people went nuts and for good reason. Now that we have Tap Strap 2, it’s time to get excited all over again. This device is a wearable for your fingers. Once you slide it on, it registers your movements as you type on an invisible keyboard. Of course, you’ll need to know the layout of a keyboard, but who doesn’t these days? Amazingly, along with typing on a surface, you can also type in mid-air as it can track the relative placement of your fingers. Talk about futuristic technology. 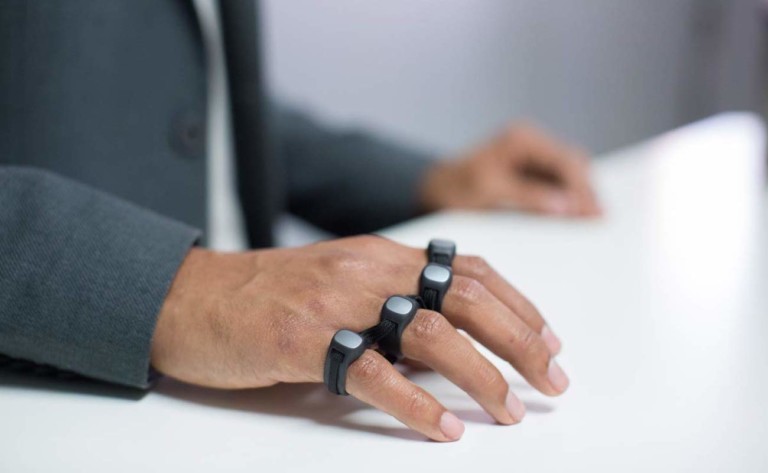 Tap Strap 2 turns everything into a keyboard 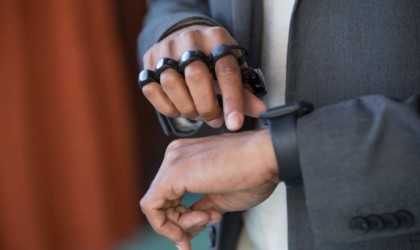 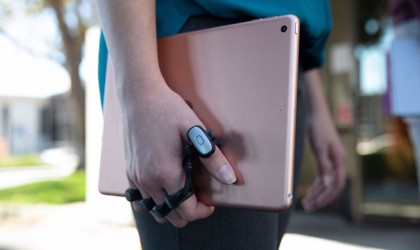 We know smartphones are only going to get smarter, but the gesture control ability of the Pixel 4 and Pixel 4 XL really blew us all away. During its launch, Google shared a video of the research process, proving just how smart the device is. The intelligent module can detect deliberate gestures and differentiate between accidental gestures. It can even sense gestures through materials so you can leave your Pixel 4 right in your pocket. With Quick Gestures, you can create shortcuts for just about everything. 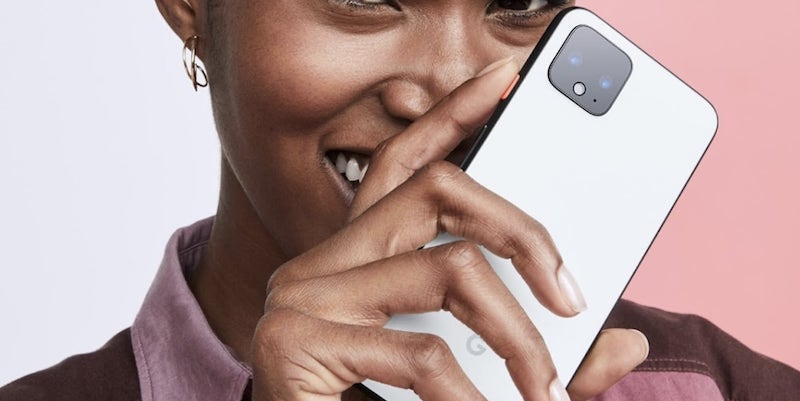 When you’re in virtual reality, the last thing you want is to be reminded of the real world. The HTC VIVE Cosmos brings in gesture control to keep you in the moment so you can enjoy it to the fullest. With simple hand movements, the VR system can detect and interpret your actions. This creates totally seamless integration with the virtual world so nothing will pull you out of it.

Got a busy day at work? It can be really annoying to have to tend to the adjustment of your standing desk. Sometimes, you just wish it would know what you want. While the Magic Desk may appear to be magical, it can’t read your mind. But it can read your gestures. Just put your hand near the sensors and use them like a magical wand to get the desk to adjust. Thanks to your preset preferences, the desk magically knows exactly what to do. Beyond gestures, it can also sense when you’re slouching and remind you to perk up. 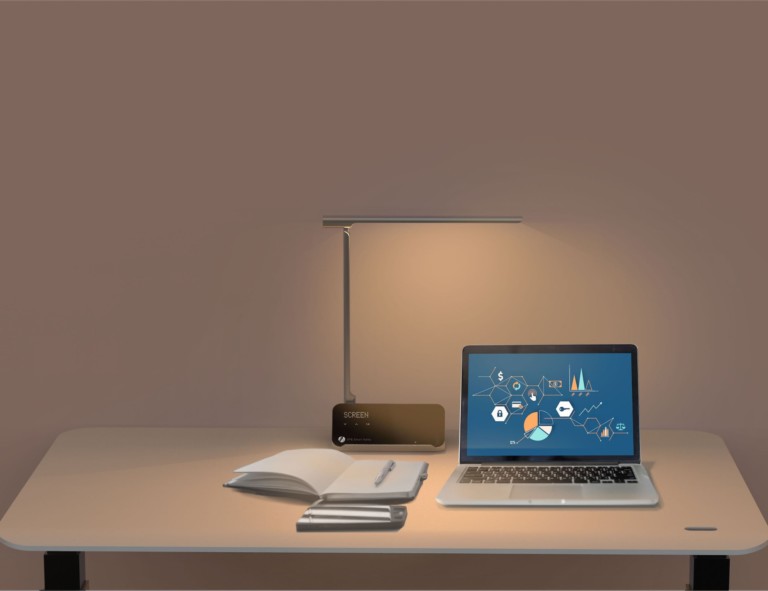 The Magic Desk is so intuitive, you'll believe it's real magic 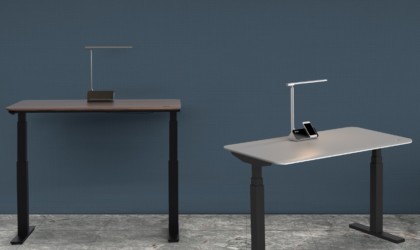 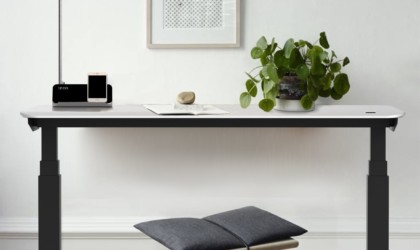 Gamers, this one’s for you. The KAI Gaming Controller is a small device worn around your hand. Tracking your hand movements, it translates them into actions in the game you’re playing. Beyond games, you can also use KAI for editing videos, toggling volume, and anything else you’ll need to do on-screen. You can scroll, swipe, pinch, point, and select all while interacting with technology like never before. It’s lightweight so you’ll hardly notice it’s there, aside from the fact that you’ll feel like you have The Force. 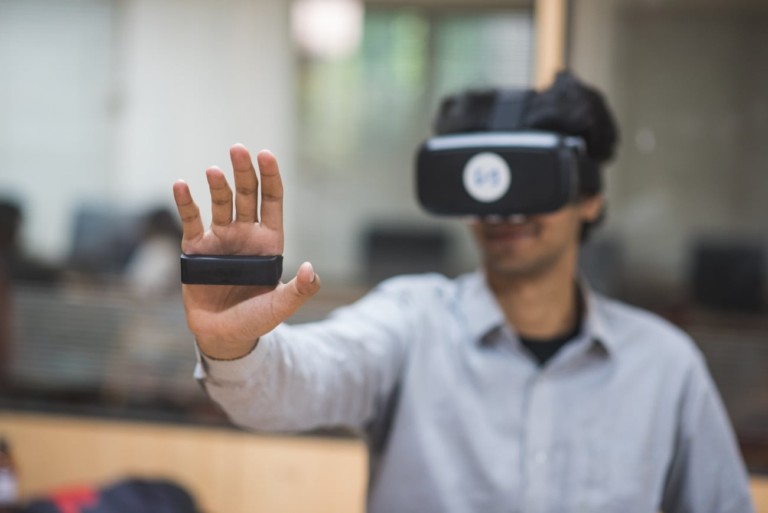 KAI adds a new dimension of interaction with your games 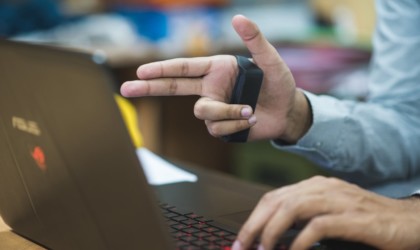 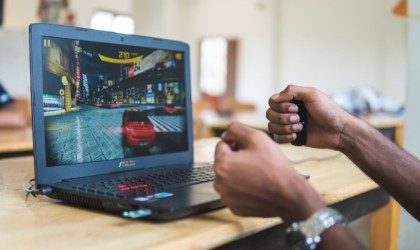 Delivering a superbly sharp image, the GLOW Mixed Reality Glasses are as smart as they are fascinating. You can use them to dive into content like never before. And they’ll never cause nausea thanks to the fact they fit your inter-pupillary distance. But you can control it all with simple hand gestures. This means you can peruse through all your content without touching your device. Your hand movements translate into actions you can see directly in the glasses. 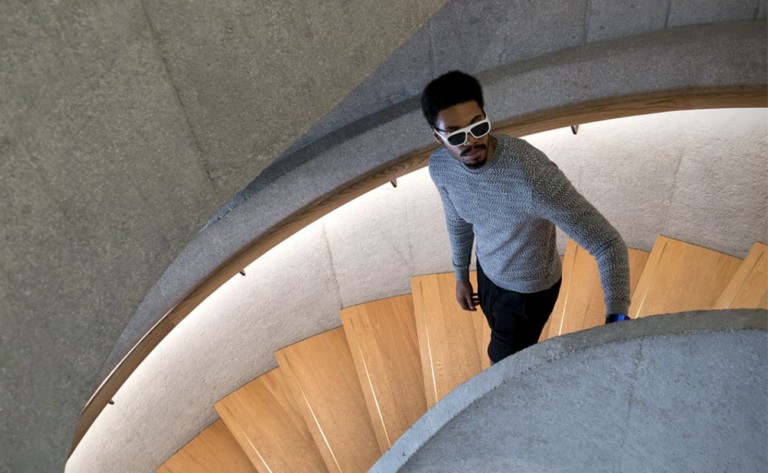 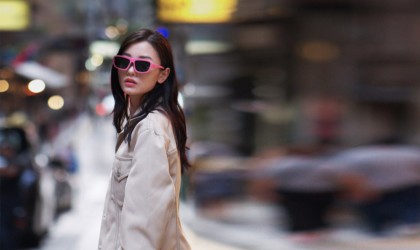 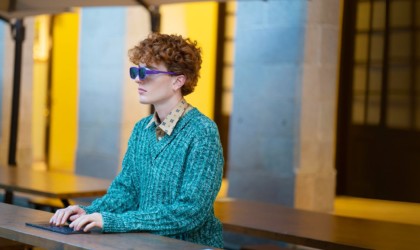 If you’re reading this, you want to know about all the futuristic devices out there. We have to say, MirroCool is certainly up there. This smart mirror goes above and beyond by integrating gestures. You can simply wink for the mirror to take a selfie. Or navigate through your schedule. Or anything else you need. Using facial gesture recognition (FGR) technology and a built-in HD camera, it reads you loud and clear every time. 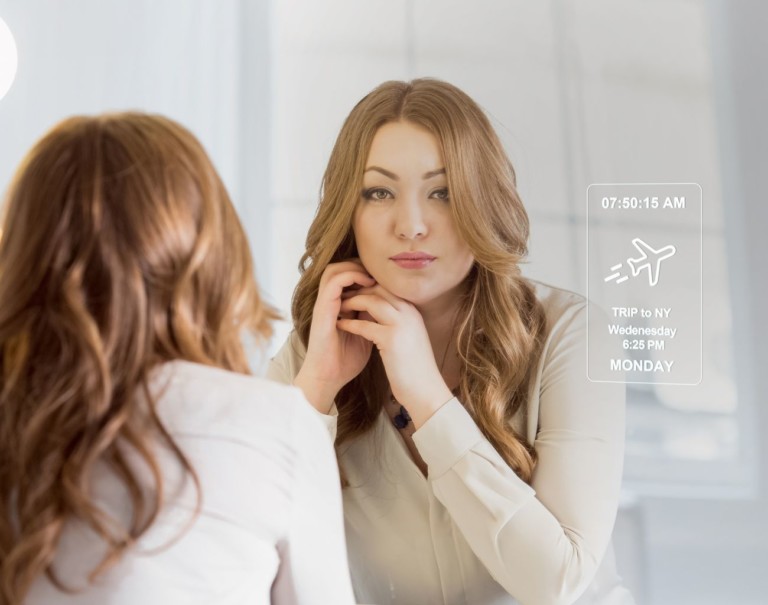 MirroCool can take a selfie with just a wink 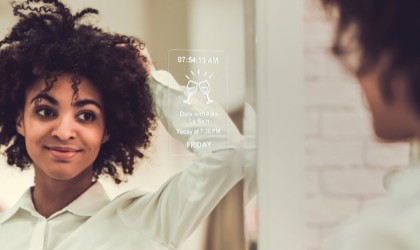 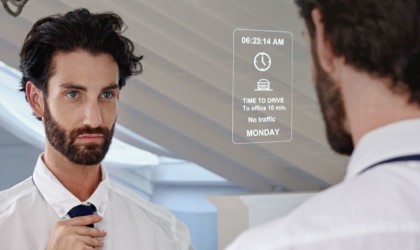 What better way to document all the fun you’re having with gesture control than with a gesture-control camera? AIR PIX is an aerial camera that uses gestures and sensors to follow you around. Although it can fit in your pocket, it houses enough technology to work seamlessly even without a smartphone. Gestures let you tell this camera where to fly and what to snap while recording.

So, have we quenched your thirst when it comes to gesture control devices? It’s truly incredible how far we’ve come. These gadgets and devices were mere dreams by those before us; something we couldn’t even imagine. Now, these products are on their way to becoming household names. Which is your favorite from the list? Do you have any cool gesture control gadgets we should add?

Ashley Timms is an editor at Gadget Flow where she gets to write about the most incredible products in the world. When she’s not writing, she’s producing fine art dog photography.
Join the Discussion
Popular Blog Posts
Smart workspace gadgets you need to add to your WFH setup Best PS5 external SSD drives out there for gamers Which drone should you buy in 2021? Must-have vacuums for home cleaning Apple Silicon Macs—should you buy the new Macs with the M1 chip?