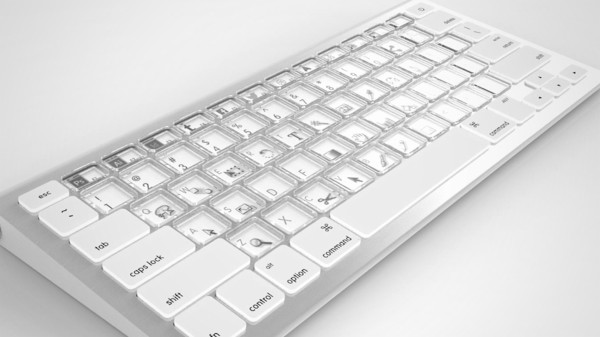 Ah, the keyboard. The vessel by which we communicate on the fantastic thing called the internet. It’s been around in one form or another since the typewriter and yet, there haven’t been any revolutionary improvements. There are different types of keyboards; I’m using one of those curved ergonomic keyboards to type this. There are other keyboards with different layouts built for better efficiency than the QWERTY layout but I’m not so sure about their adoption rate. Sonder Design has conceived an absolutely brilliant concept called the Sonder Keyboard; you’ll be astounded by the simplicity.

The Sonder Keyboard looks pretty standard at first. Typical QWERTY layout, fn button, Control buttons, even the Apple command button. The main keys themselves have a high quality look due to the glass framing; the side keys as well as the bottom row have the same look as an Apple keyboard.  All in all, a good looking keyboard. The quality is apparent even from just a visual inspection and Sonder Design has gone on record as seeking to deliver a crisp, responsive typing experience.

Then there’s the cool factor of the backlighting. You can see it below, tell me you’re not impressed. I’d buy this just for this appearance as well as function. Speaking of function, you can see the top row of keys has shortcuts to Twitter or Facebook or other apps.

The Sonder Keyboard does have that top row of added functionality but that’s only the beginning of the amazing things it can do. You see, the Sonder Keyboard has a customizable e-ink display underneath the transparent keys so you can set it to any layout you want through the included software.

This opens the typical, boring hardware we all know to infinite possibilities of usefulness. You can use the DVORAK layout, a Photoshop layout, a layout for gaming, a layout for different languages, you name it. Sure, getting used to a brand new style of keyboard will take some practice but for something so powerful just in its concept, it’s bound to be worth the extra effort. Coupled with Bluetooth functionality, the Sonder Keyboard becomes compatible with not only Macs but PCs, tablets, and smartphones. As far as I can tell, the Sonder Keyboard isn’t limited to those devices either; it can work with any device that uses an input device. All it needs is Bluetooth and the Sonder Keyboard will work. The PS4 is one of those devices, just Google the specs of the device. I can’t wait to see how it works in person.