Considering a 3D printer? Look for one with a laser-engraved build plate and DLP technology for a longer lifespan and, best of all, high-quality results. Continue reading to see what recommended printer we have in store. 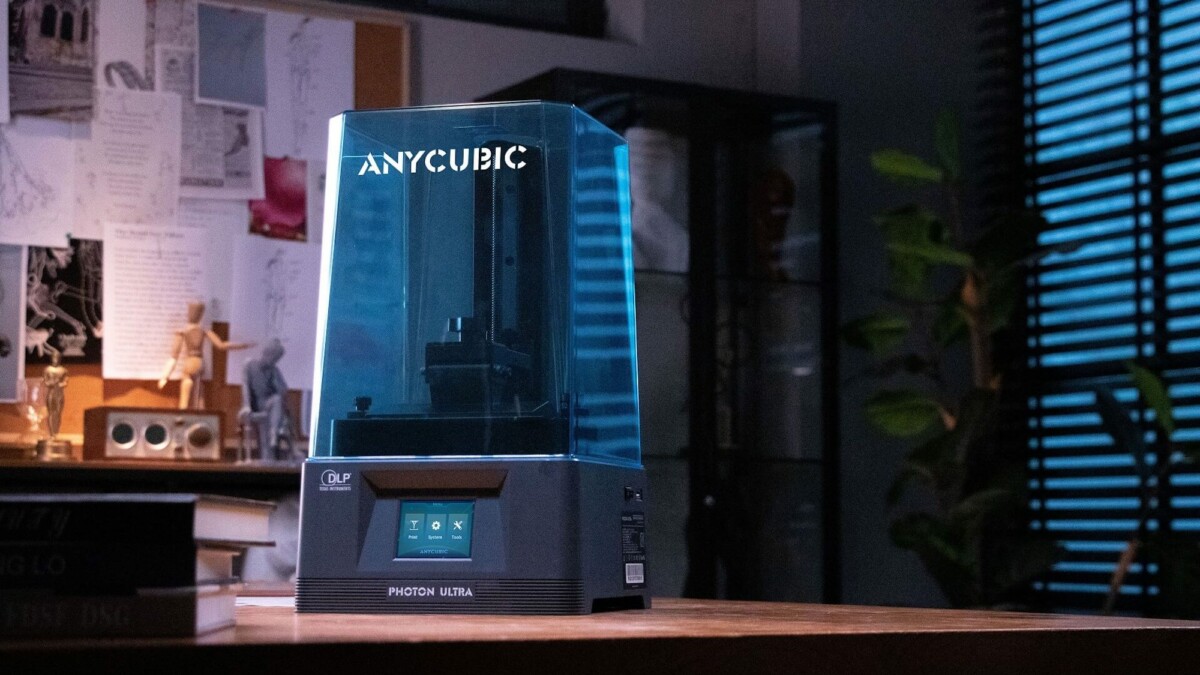 With a larger lifespan than a typical LCD panel, the DLP chip ensures that the Photon Ultra lasts up to 10 times longer, helping save you money in the long run. Let’s discover exactly what you can create and why this 3D printer is way ahead of the competition.

Preserve energy while printing with the Anycubic Photon Ultra

The Anycubic Photon Ultra will help customers save big on screen replacements because the DLP system gives the machine over 20,000 hours of usage—10 times longer than LCD printers. That eliminates the pain of frequently replacing LCD panels, postponing the future need to replace 3D printers.

In an MSLA system, the light source is typically an array of LED lights. However, there’s usually only a single light source in a DLP system, which is more efficient. Only 12 watts are consumed when operating the Anycubic Photon Ultra, compared to up to 60 watts for MSLA systems.

But these energy-saving factors don’t mean that the Anycubic Photon Ultra isn’t a power machine. In fact, it’s powered by a DLP optics energy that dissipates heat through a radiator without the need for a fan. As a result, this DLP printer remains whisper quiet during operation.

Consider a DLP printer over an LCD alternative

We briefly touched on the energy-saving differences between this DLP printer and LCD alternatives, but there’s so much more to uncover.

First, the Anycubic Photon Ultra uses a digital light projector, instead of a laser, to cure the resin. This technology projects images similar to a cinema, producing crisp results without any blurry edges or light leaks.

Consisting of hundreds of thousands of mini mirrors, a digital micromirror device then selectively guides light. As a result, DLP printers provide up to 90% uniformity in an image along with concentrated light beams.

LCD printers stretch pixels onto larger screens, providing in a less lifelike result, even in higher resolution printers. Alternatively, DLP printers direct light with excellent precision, even at low resolutions of 720p for impressive results that even a 4K printer can’t master.

Get the precision you need at a high speed

There are so many 3D objects you can make with the Anycubic Photon Ultra—from figurines to jewelry to environment models. Your options are endless, and you’ll discover even the smallest details for realistic results.

Despite a 1,280 x 720 resolution output, this 3D printer delivers a print quality that’s better than 4K monochrome printers thanks to the light projection. With no light convergence, it provides crisper black-white contrasts and no bumps or shadows around the edges of your models.

Best of all, the blazing-fast engine speeds print at 1.5 seconds per layer. So you don’t need to impatiently wait for your creations to manifest. Moreover, once your models and figurines are ready for you, it’s easy to remove prints, thanks to the engraved checker pattern and improved adhesion on the printing best.

Perfect and personalize your craft

You’re an artist and want to perfect your craft, which is why the Anycubic Photon Ultra includes in-printer controls. At the touch of a button, you can adjust the layer height, speed, and other slicing settings. Not only does this give you the scope to personalize the results, but it also prevents you from walking back and forth to your laptop. Simply make the adjustments directly from its color LCD touchscreen.

Overall, this 3D printer is available to preorder on Kickstarter for $399 (33% off the retail price) for the first 300 units. Within 5 minutes, the financial goal was met, and one hour later, the brand broke through the $1 million mark. Currently, the pledge for this project is at $2 million, which will end on October 15.