Wake Up Early (Or Late) With these Five Fancy Alarm Clocks 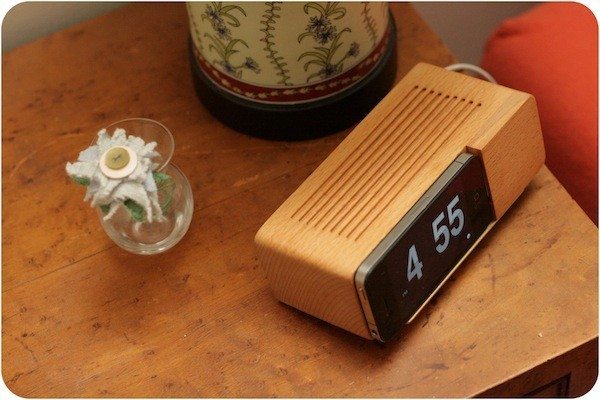 It’s hard waking up early in the morning when you don’t want to. I wake up at 4:00 AM five days a week, and it doesn’t seem to matter if I sleep for eight hours or four- I still feel slightly groggy when the alarm rings and I open my eyes. While there’s no quick fix for adjusting your personality to fit a morning bird’s schedule, you can have attractive bedside tech. 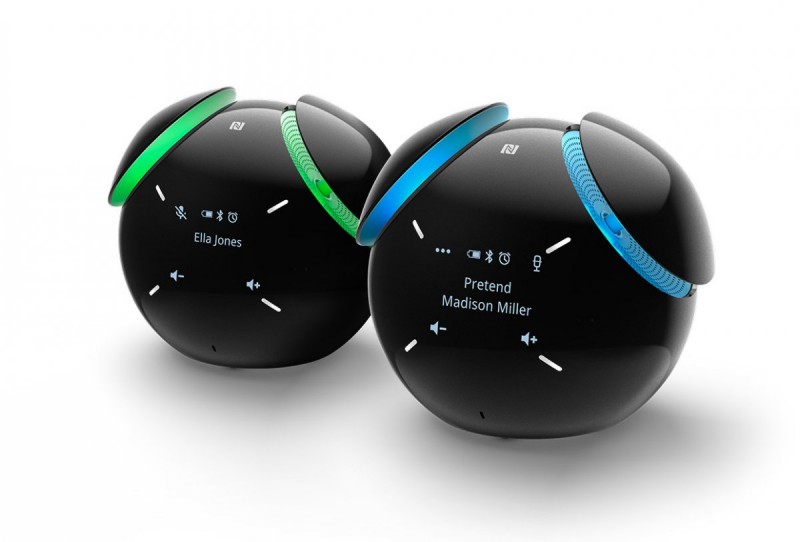 For the Android fan, there’s a Sony alarm clock that functions with your phone. The tiny ball of a clock is bluetooth and voice enabled, equipped with speakers, allowing you to move your music to any room in the house. It gets fancier too: with the Speaker BSP60, you can check the weather, set your alarm, and it will inform you when you have a new notification on your phone. Sure, you can do all of this with just your phone, but does it have LED lights that change colors? 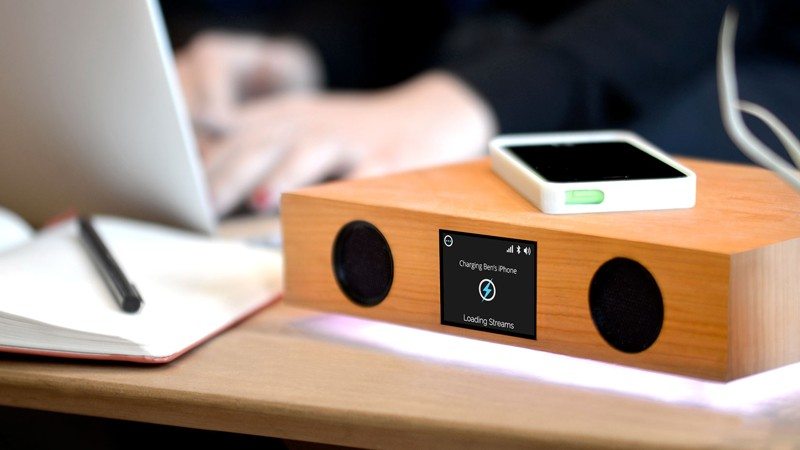 We’ve introduced Glowdeck to you before, and for those that missed it, here it is again! Glowdeck is still the companion for you smartphone and offers many of the same features as the Speaker BSP60: voice activate controls, classic alarm clock settings, and bluetooth capability for streaming music. You can command the Glowdeck to call someone from your phone, or ask about the weather. What sets the Glowdeck apart from other fancy digital clocks? Wireless charging. 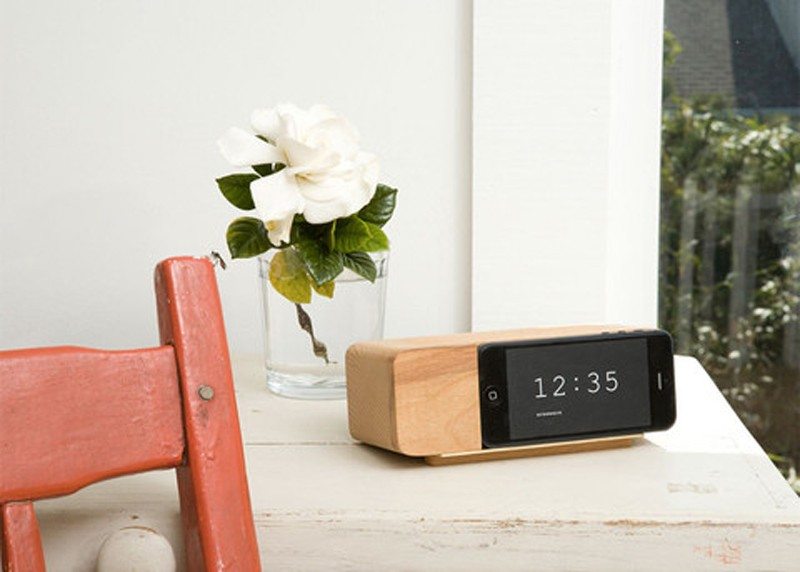 For the minimalist who wants less of the flashy lights and more of a sleek place to charge their iPhone, there’s the simple Alarm Dock for iPhone. It doesn’t do anything praise worthy, but it’s a nice piece of art that looks classic when paired with the digital clock feature on the iPhone. This dock only houses the iPhone 4 and iPhone 5 models, but I would not be surprised if we see a dock for iPhone 6 models soon. 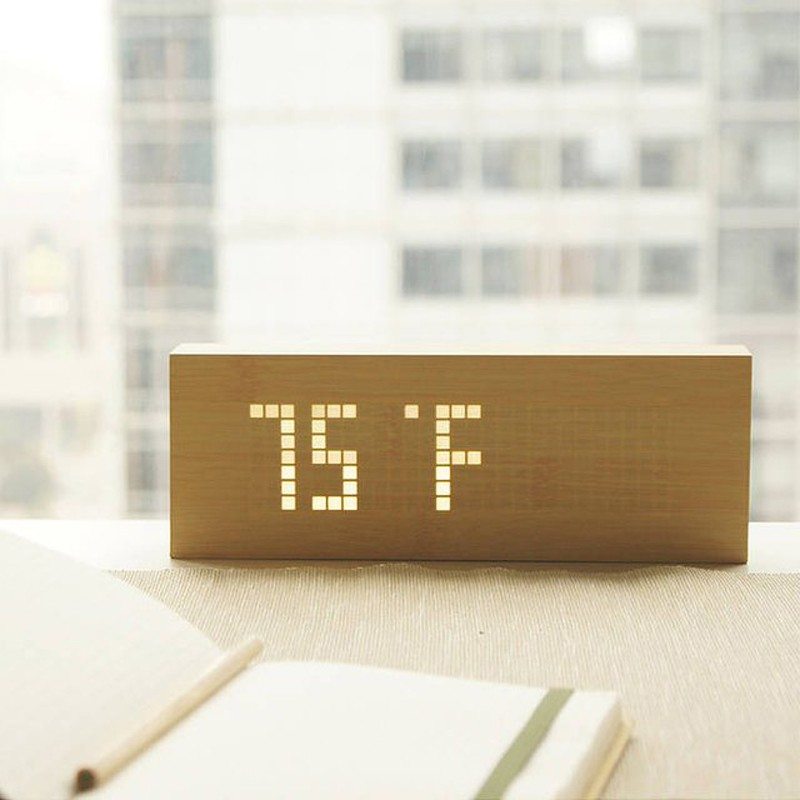 Here’s another one for the minimalist- this simple alarm clock tells time, projects the weather and date, and flashes personal messages that you program yourself. It’s a piece of wood that reflect the time, and although it may not appear to be much, it will look great on any nightstand. 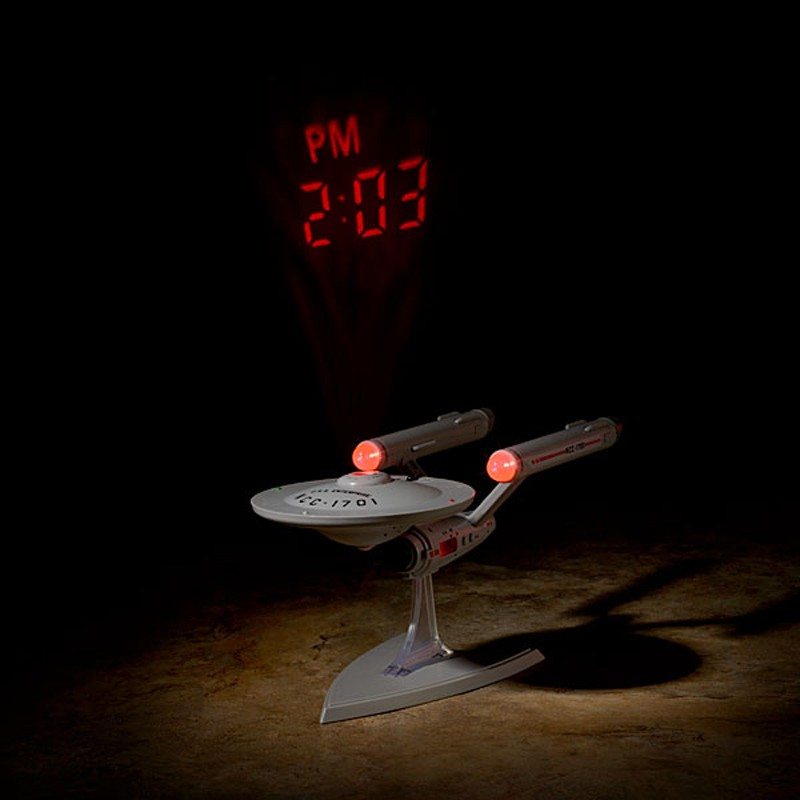 It might not connect to your smartphone, but it is a mini replica of the Star Trek Enterprise. It projects the time in big, red letters, and the alarm is the voice of Captain Kirk calling the Bridge. If you’re a Trekky, I can understand your excitement.

As an aside, this one may be my personal, geeky favorite. I was raised a Star Trek fan, and when I was younger I had an older version of this alarm. When the alarm would go off, you would hear footsteps running then Captain Kirk would say, “Landing party to Enterprise, beam me up, Scotty.” followed by the sound of the transporter… over and over again until I finally decided to roll over and turn it off. It was probably the most annoying, while simultaneously the best alarm clock I had ever owned. Let’s be honest, I’m probably going to buy this one too.