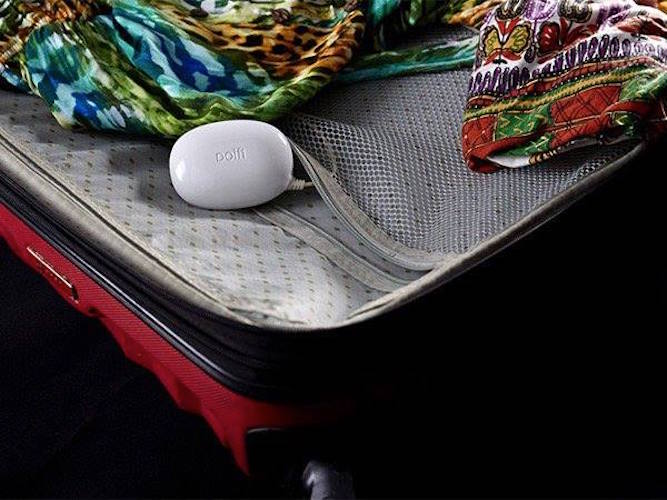 Traveling is pretty great. You take in the sights, live life in the moment, and you don’t worry about much more than your passport getting stolen. Perhaps the only downside is that you eventually run out of clothes. Dolfi is here to change that – no matter where you are.

Dolfi is a small gadget that will clean your clothes and save you money and energy. When you’re traveling you tend to bring just what you need and hope that you don’t run out of pants. If and when you do, your options are to either pay someone to do your laundry, assemble time and coins to sit at a Laundromat, or keep wearing dirty clothes. The team at Dolfi, namely founder Lena Solis, didn’t think these three options worked for those that travel- why not have one button to press and get clean clothes? 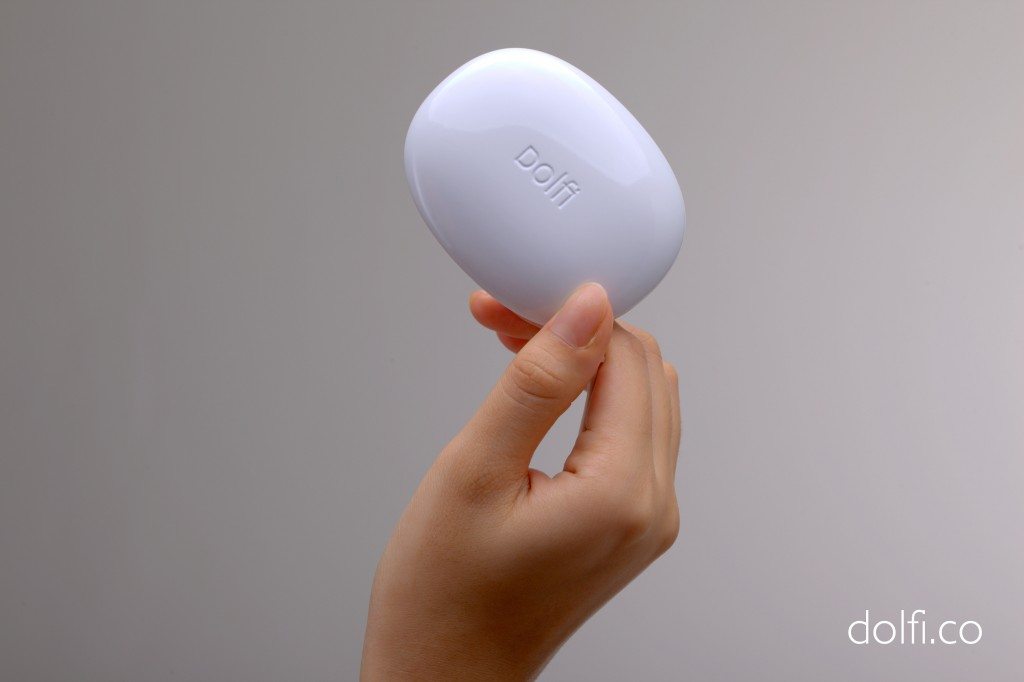 Dolfi is as simple as could be. You just put your clothes in a container of water (don’t have a bucket? You can even use a plastic bag!), add your detergent, drop in Dolfi, and switch it on. That’s it. In about thirty to forty minutes your clothes will be as clean as can be. In addition to being compact and time-saving, Dolfi uses about 80 times less energy than traditional washing machines.

Dolfi works by using ultrasonic technology, which puts sound pressure waves through the water, which, in turn, causes something called cavitation. Cavitation is the formation of little tiny bubbles, or vapor cavities, in liquid. Think of Dolfi like shaking up a can of soda. Those little vapor cavities implode which causes mini jet streams in the water. Your clothes get clean by all these little bubbles bursting. Dolfi illuminates a blue glow to let you know it’s working and sending out ultrasound vibrations.

In about half an hour you have a clean set of clothes. You simply rinse them to get off any excess grime and detergent and hang them to dry on the inflatable hanger. 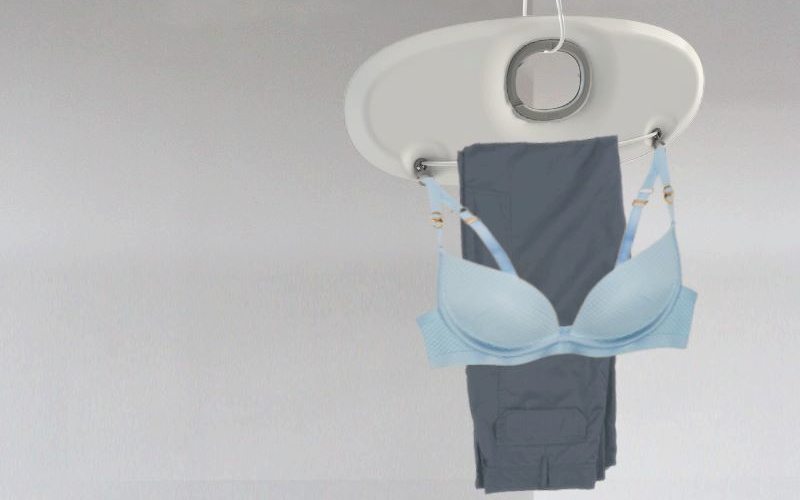 Dolfi provides a whole kit to make sure you get the most out of the experience. The kit includes an inflatable hanger, a sink stopper, and the corded Dolfi itself. The engineers mention that leaving the device in the water while plugged in is completely safe and comparable to the lights that are used in a swimming pool- you won’t get electrocuted. You can also use whichever detergent you have access to, whether it’s liquid or powder. And, best of all, Dolfi is nearly silent so you don’t have to worry when using it at a hostel with your five roommates sleeping. 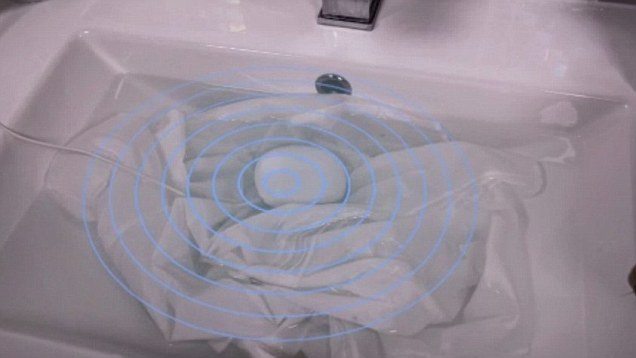 Jenny McGrath of Digital Trends notes that Dolfi is so gentle it can even wash cashmere without causing damage. 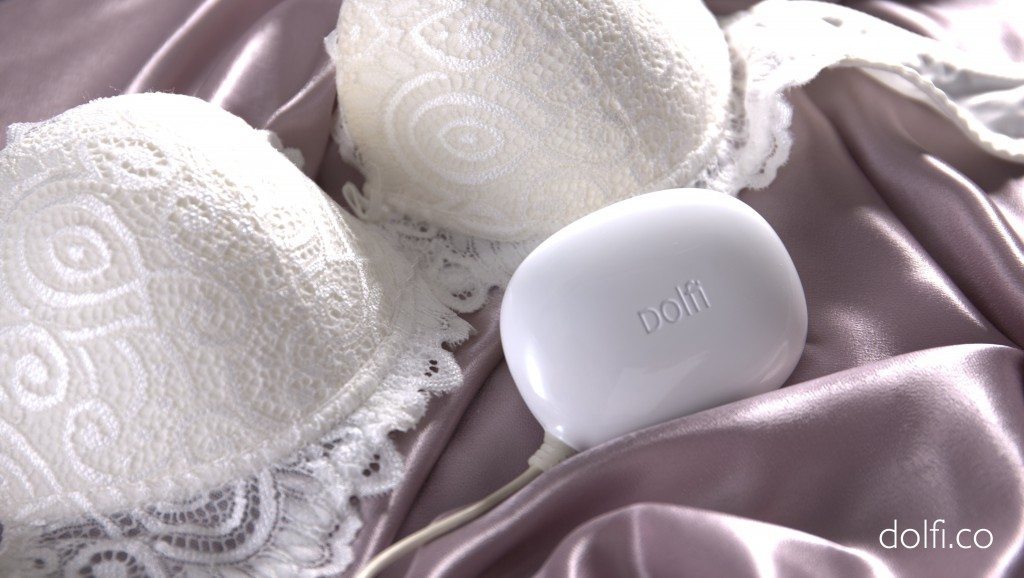 Andrew Liszewski of Gizmodo mentions that the technology behind Dolfi isn’t new and therefore not a challenge but the real task is finding a company to mass produce the gadget while keeping the low cost. Time will tell.

Dolfi is currently live on Indiegogo until February 19th. In the first week, Dolfi have raised nearly double their goal of $100k. A portion of proceeds from their campaign will go towards the welfare and research of dolphins, the inspiration of the gadget’s name as they, too, use ultrasound to communicate.

You can get a Dolfi for a donation of just $119 (also in multipacks for the family or company). Dolfi is expected to retail for $180 and the first batch will ship in August 2015.

Ashley Timms is an editor at Gadget Flow where she gets to write about the most incredible products in the world. When she’s not writing, she’s producing fine art dog photography.
1
Join the Discussion
Latest Blog Posts