You love your Apple Watch, but it's kind of annoying that you need two hands to operate it. Luckily there's a gadget that solves this problem, the Mudra Band. Clip your Apple Watch into this gesture controlled band and enjoy music, and manage your notifications with a simple movement of your finger. 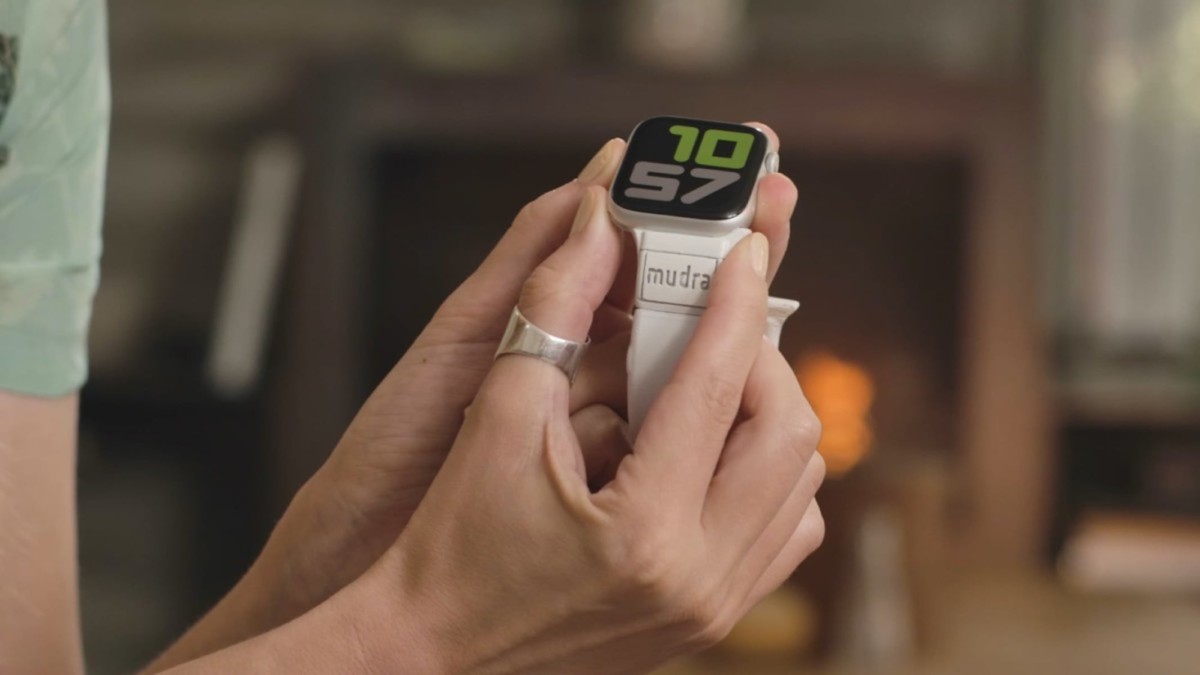 You’re out for an early morning jog, running to the beat of the music when a song you don’t particularly like begins to play. You stop, mid-stride, to tap skip on your Apple Watch. No matter how you want to use your Apple Watch, you’ve got to stop what you’re doing to adjust your music. In this technological age, that’s a bit irritating. And it’s an issue the inventors of the Mudra gesture-controlled band hope to fix.

The Mudra Band looks like your typical watch band. Only it features a space at the top where you’ll use the easy slide-it-in mechanism to slide in your Apple Watch display. But what’s impressive about this gesture-controlled band is what’s inside. The band’s interior is equipped with stainless steel medical-grade electrodes and sensors that are optimized to capture the tiniest of neural signals. This allows the wearable to read simple hand and finger gestures to help you manage your Apple Watch, single-handedly. Best of all, this gadget makes using your Apple Watch a much more immersive, fun experience. It’s like you’re signing to your Apple Watch, which, I suppose, is what you’re doing.

How does it work?

That’s a good question, and it deserves a detailed answer. According to the company’s Indigogo page, when you want to move a finger, the Mudra Band’s electrodes capture the neural signals that your brain sends through your wrists and fingers. Then, patented SNC sensors log the signals while deep-learning AI algorithms interpret the signal pattern to identify which finger you’re moving. The signal then gets paired to a function on your watch. Sounds pretty cool, doesn’t it? 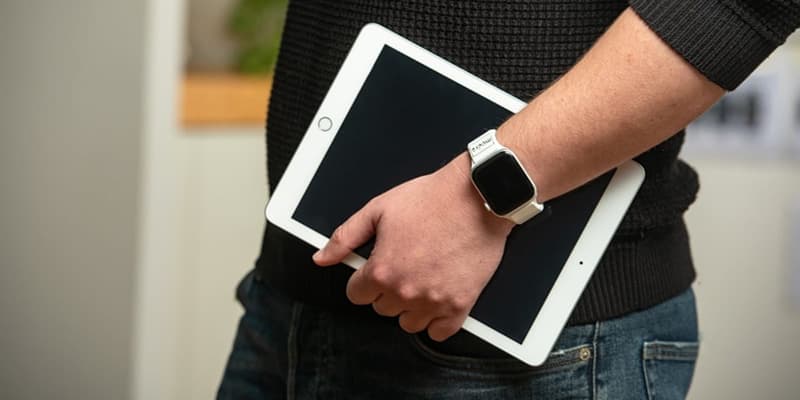 Mudra Band on a Wrist with a Tablet

What are the hand gestures?

The hand gestures you’ll use to operate the Mudra Band are easy and intuitive. They were assigned based on the company’s extensive behavioral research to determine the most natural interaction methods. So this gesture-controlled band supports discrete, continuous, and air-touch gestures. Discrete gestures are ones that involve individual finger movements like the tap of a finger on the thumb while continuous gestures use your fingertip to create pressure. Finally, air-touch gestures combine fingertip pressure and an air mouse, for instance, sliding your finger to unlock the device. 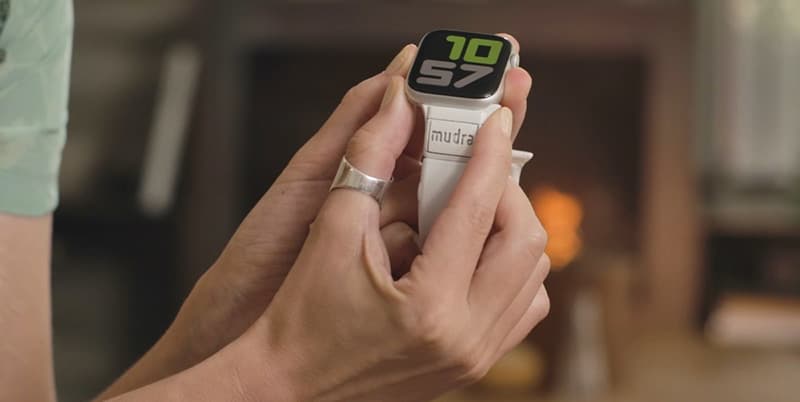 Mudra Band in a Woman’s Hand

What happens if I make a gesture by mistake?

That was one of my first questions since I tend to talk with my hands. The inventors are prepared for this, however, and they are building what they call an algorithmic pipeline that can learn the difference between an intended gesture and unintended movement. The pipeline can then connect the action within the context of your activity. So the Mudra is a pretty smart gadget. 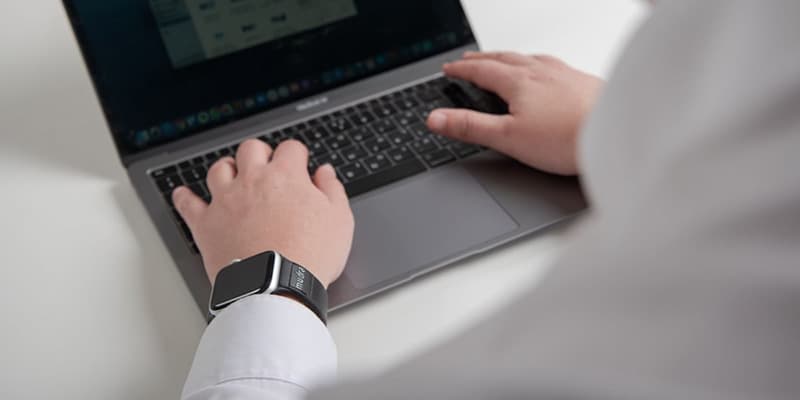 Mudra Band on a Man’s Wrist

Is this watch band comfortable?

The makers have designed this gesture-controlled band to be comfortable, durable, and elegant enough that you’ll want to wear it every day. This is because, as the campaign rightly points out, a wearable has to be worn to be successful. And people are more likely to wear accessories that are comfortable and look beautiful. The Muda Band has a snug fit around your wrist, and its bright white and sleek black colors offer a modern, minimal style. 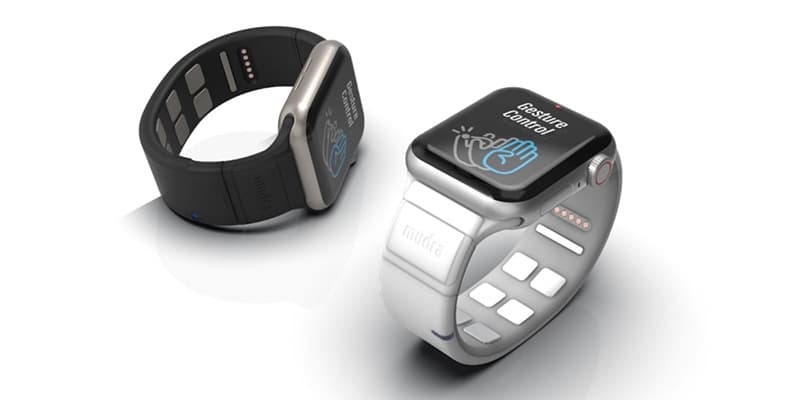 Which Apple Watches are compatible with this wearable?

You can wear the Mudra Band with Apple Watch Series 3 and later models and with iPhone 7 and later, so it works with a pretty good range of Apple devices. The band has an adaptor that fits 40mm, 42mm, and 44mm watch sizes. 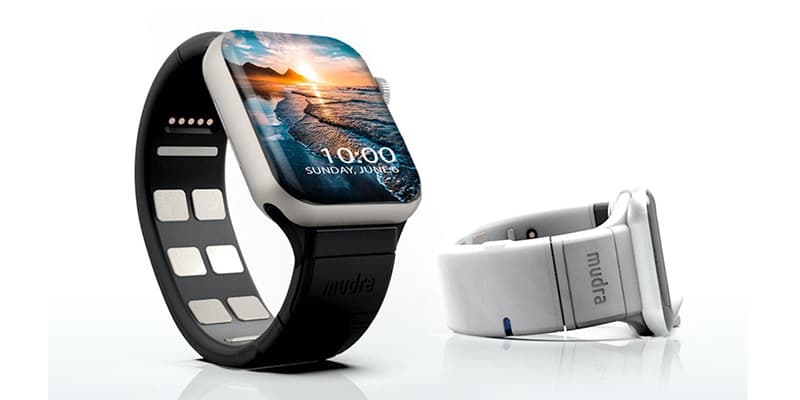 What are some of the other specs?

This gesture band features BLE connectivity and charges via Pogo-pin in less than an hour. A single charge delivers two days of use with the Li-Po 3.7V/40mAh battery. Also, there are 3 SNC sensors and a 6 DOF IMU. And you won’t have to worry about getting this sophisticated gadget wet; it has an IP56 rating, which means it’s protected against dust and powerful water jets.

I’ve always found Fitbits and other smartwatches to be a bit cumbersome. It’s difficult to stop what you’re doing just to take care of your watch. But the Mudra Band is a gadget that makes me want to go out and get an Apple Watch so that I can use this band and signal to it throughout the day. The Mudra Band is a gadget that makes the Apple Watch answerable to the wearer instead of the other way around. And best of all, it achieves that in a fun and intuitive manner.

You can preorder a Mudra Band for $139 on Indiegogo.