You're looking to buy a new TV in 2020. With all of the 4K and 8K TV options out there, the choice can be a little dizzying. With Samsung launching its new lineup of 4K and 8K TVs in March 2020, there's even more to think about. Let's take a look at the Samsung lineup and see what it has to offer. 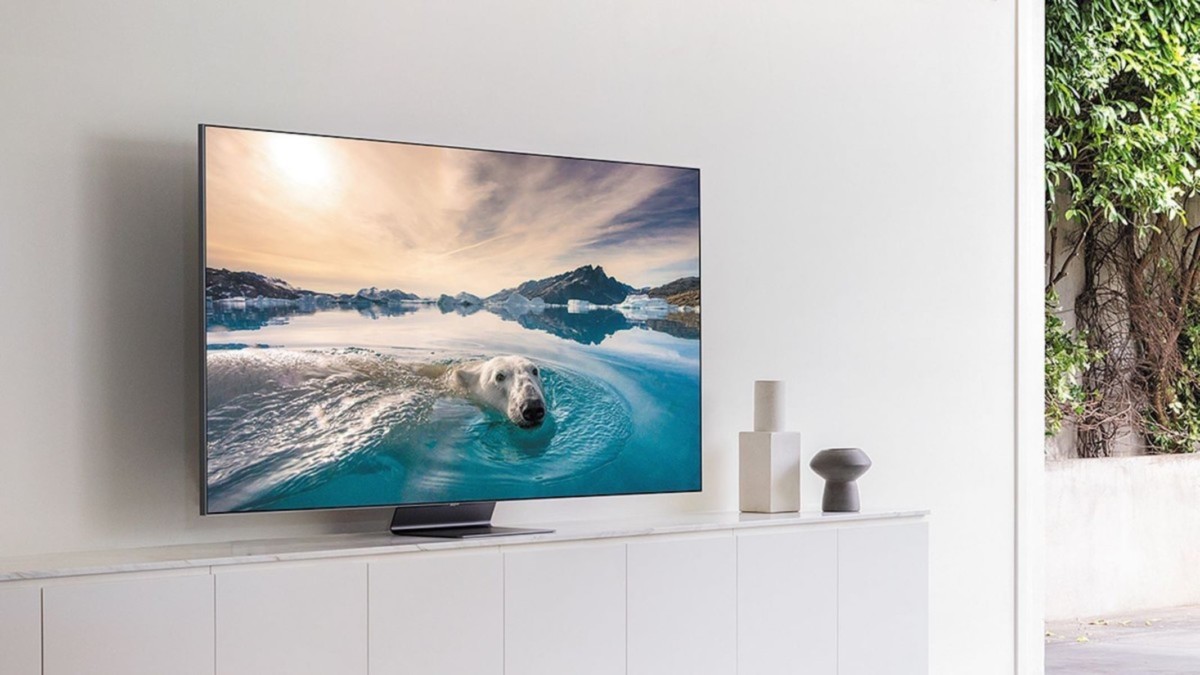 With the Samsung 4K and 8K TV lineup in 2020, you’ll have even more options to consider for your new TV in 2020. According to The Verge, you’ll want to note the Q950TS series with its barely-there bezels. This is the model with the “infinity screen” that created a buzz at CES 2020. Samsung says, “when consumers watch from the average viewing distance of 10 to 15 feet, the bezels seem to disappear, creating an effect where the screen appears to elegantly float in the air.”

But, The Verge cautions us, it’s Samsung’s 4K TVs that we should pay attention to, especially if we plan on buying either the new PS5 or Xbox Series X later this year. We might also ignore the Q6oT series, “as it misses out on a lot of features including variable refresh rate (which Samsung brands as Real Game Enhancer Plus).” These features, along with an adaptive picture, are part of the Q7oT series.  So, without further ado, let’s take a look at the new features in the 2020 Samsung TVs and, of course, the Samsung 4K and 8K TV lineup itself. 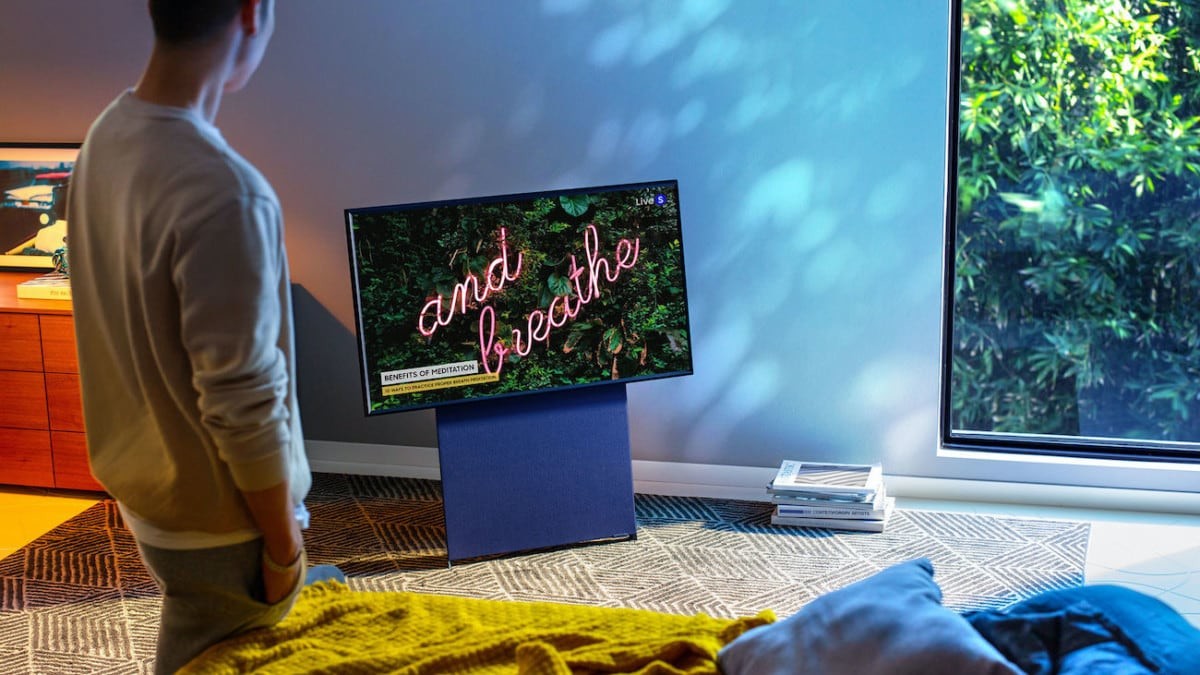 What are the new features of the Samsung 2020 TVs?

T3 says that this year, Samsung’s range divides new features nicely among the models. And the further up the range you go, the more included options you’ll see. Below are the new features in the Samsung 2020 TVs. You’ll want to know about them before you make your final decision on your new TV in 2020.

Quantum Dot AI is what Samsung is calling its latest upscaling tech. This feature helps video footage upgrade to 4K or 8K. It also helps the picture look as though it were filmed in those resolutions.

Adaptive Picture is a nifty technique. It’s a feature that adjusts your video image based on the lighting it detects in your room. This way, you’ll be able to view everything clearly, no matter the light. So if you’re watching football at midday on a sunny Sunday afternoon or gaming in the dark with all your blinds closed, you’ll get a great picture. 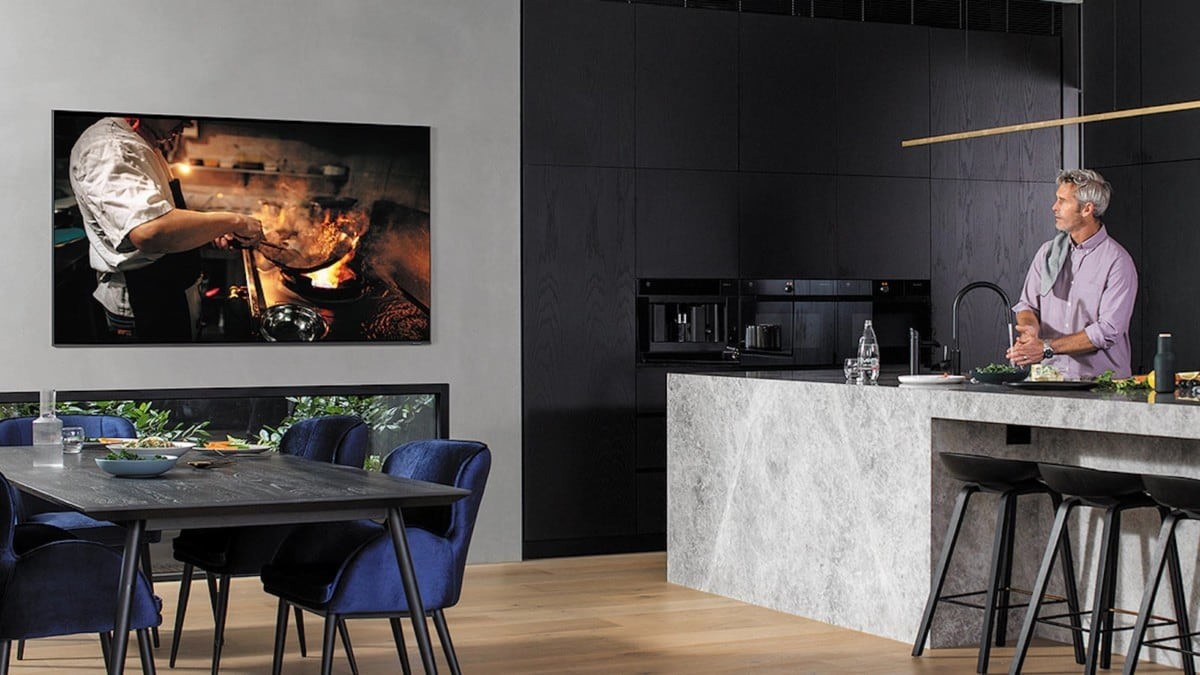 Active Voice Amplifier listens out for background noise like noise-canceling headphones. For instance, say someone is running the garbage disposal in the kitchen, or the baby is crying in the background. The feature will increase the volume level of dialogue only. This way, you’ll be able to hear what’s being said without increasing the volume of the other sounds. The feature automatically drops the volume once the noise stops. It’s a super convenient way to watch TV.

Object Tracking Sound+ is a feature that creates a 3D soundscape from anything that’s playing on your screen, even if the original video didn’t have Dolby Atmos or an equivalent 3D soundtrack. The soundscape gets combined with the speakers that line the edges of the set to project a wide 3D audio experience. According to T3, it does a much better job of making soundtracks feel natural than a standard TV setup.

Q-Symphony is an enhancement to Object Tracking Sound+ if you have a Samsung Q-series soundbar. This feature will work with the bar to add a greater depth of sound when it’s combined with higher-up speakers on the TV. T3 says it’s an improvement over just the Samsung soundbars or the TV speakers.

Real Game Enhancer+ is the variable refresh rate technology you’ll see on several TVs this year. It’s supposed to be a significant feature on the PlayStation 5 and Xbox Series X that enables the TV to only refresh itself at speed as at the console can supply new frames. This should result in games that look smoother. 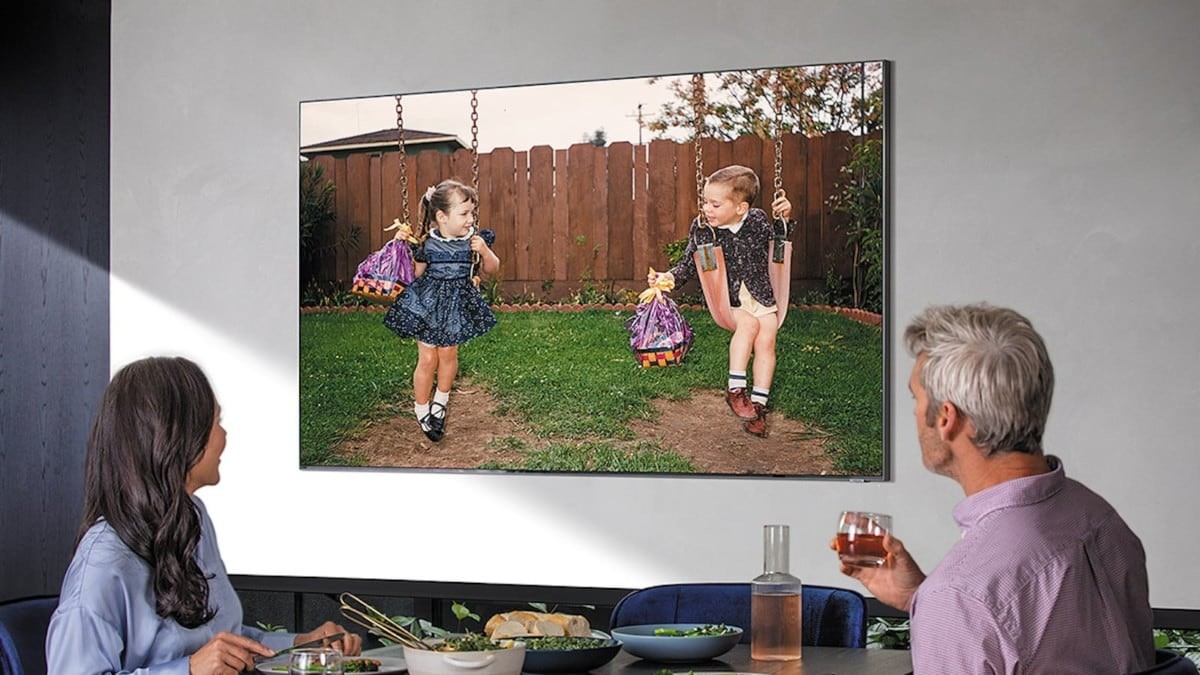 According to T3, at the top of the Samsung 4K and 8K TV range is the Q950TS. Its most significant update for 2020 is its bezels on the side and top that are so thin, they almost disappear.  The image seems to blend into your living room—just like an infinity pool blends into its surroundings. Inside, the 8K display fits in 33 million pixels in three sizes of display, paired with Samsung’s latest processor. This will ensure that everything gets upscaled. The TV’s HDR capabilities are one of its most exciting features. It boasts localized dimming of its backlights to make the blacks as true as possible. In terms of features, this line has everything from Samsung’s current lineup, including six speakers around the edges, and two that fire upwards. The 85″ Q950TS costs 12,999.99. The 65″ Q900TS is $5,499.99.

The Q800T series is one that T3 calls the best Samsung 8K TV for a lower budget. It boasts 8K resolution, a Quantum Processor 8K, and 8K AI upscaling capabilities that will make your content compatible with your screen. The series also has Direct Full Array backlight zones, an Ultra Viewing Angle which reduces glare and keeps contrast and color accuracy at wider viewing angles. This series includes quantum dot technology and ranges in size from 65 to 82 inches.  The sizes and prices are: 65 ($3,500), 75 ($5,000), 82 ($7,000) inches. 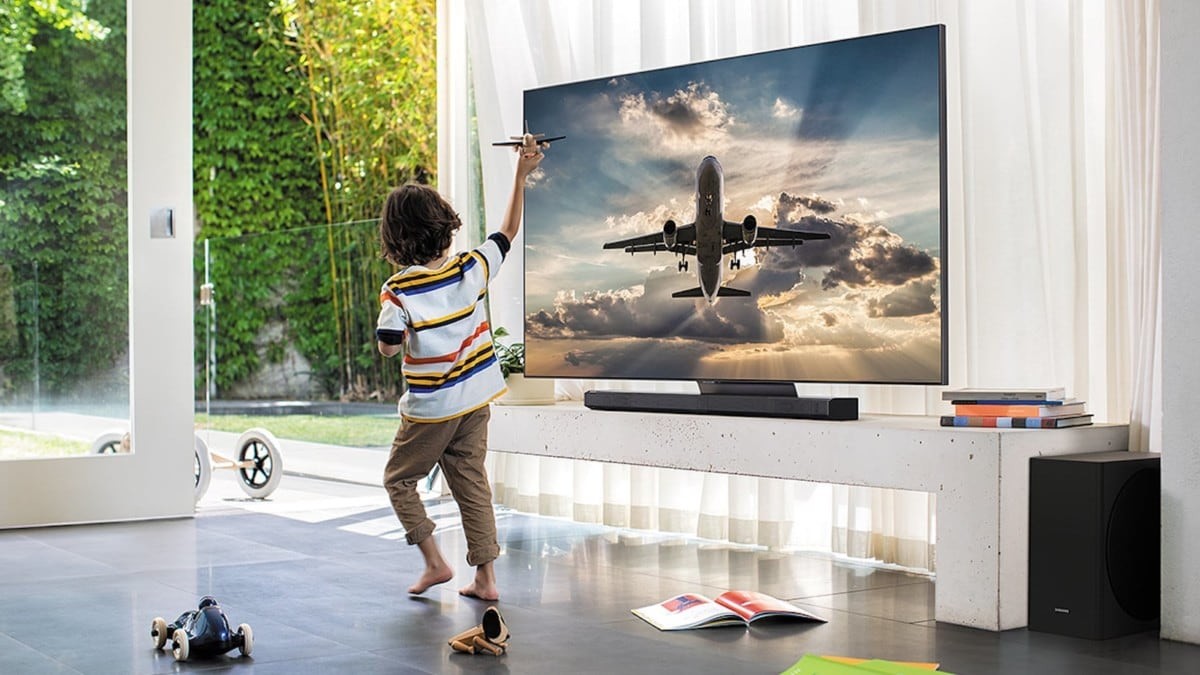 T3 calls these models Samsung’s top-of-the-line 4K QLED TVs. They are the most advanced TVs in Samsung’s 4K TV range. Unfortunately, they are a bit behind the 8K models regarding their overall capabilities. But for 4K TVs, they are excellent. They have an HDR rating of 2,000 nits, but fewer dimming zones compared to the Q800T. In terms of speakers, four around the edge rather than the six you’ll see in the 8K models.

The review on T3 says that these are your more mainstream 4K TVs. The model is similar to the Q95T, but it has some differences in the design and a lower HDR brightness rating. For many customers, the Q95T could be a great buy since its brightness is higher than that of most OLED sets. It also has a direct backlight array with local dimming. This means you’ll get high contrast and black colors. With this model, you also won’t miss out on features. It has four speakers, the same processor, and the same capabilities as the Q95T. The screen’s just not as vibrant. A 55″ Q80T costs $1,299.99. 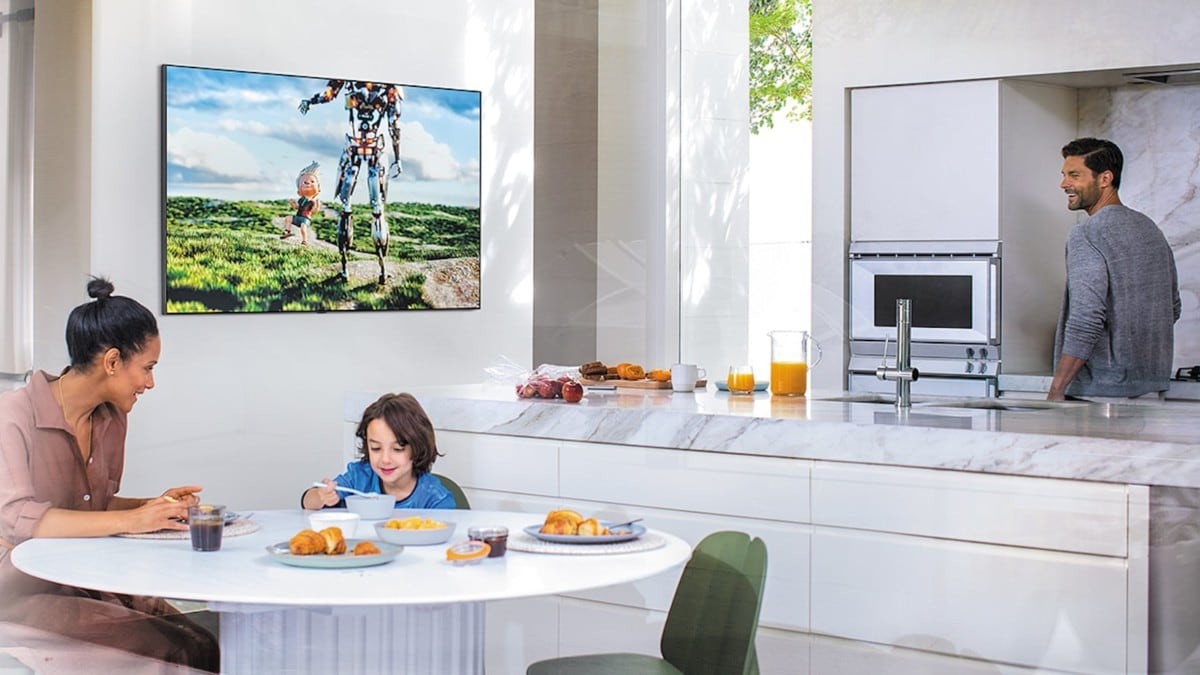 According to Digital Trends, the 70T Series has a more limited HDR than the 80T series and only has stereo sound with 20 watts of output compared to the 80T’s 60W and 2.2.2 channel system. It has the same processor, identical smart features, and can produce great colors with its quantum dot technology. What’s more, it has 4K upscaling and the Adaptive Picture feature. A 65″ Q70T costs $1,299.99.

Samsung’s basic QLED TV model for 2020 has some solid features, like 100% Color Volume with quantum dot technology and Quantum HDR. It has a less powerful processor than the previous TVs with its Quantum Processor 4K Lite. It boasts the features of Samsung’s smart platform. Using this TV, you can control all of your home’s smart devices and program customized automation. For instance, dimming the lights at night and opening your smart blinds in the morning. A 43″ Q60T costs $529.99.

This series is the non-QLED display in the Samsung 4K and 8K TV 2020 lineup. Each TV features crystal displays, deliver more brightness, and a more extensive range of colors than a standard UHD TV. The TU8000 comes with HDR and Samsung’s Crystal Processor 4K in contrast to the QLEDs’ quantum processors. A 50″ TU8000 costs $429.99.

The TU7000 Series also features a crystal display, a Crystal Processor 4K, HDR, and Samsung’s smart features. One of the main differences between the 8000 and 7000 Series is their gaming features. The TU8000 comes with Game Enhancer features while the TU7000 has Auto Game Mode. Also, the 7000 Series comes with two HDMI inputs in contrast to the three inputs on the TU8000. A 43″ costs $299.99. 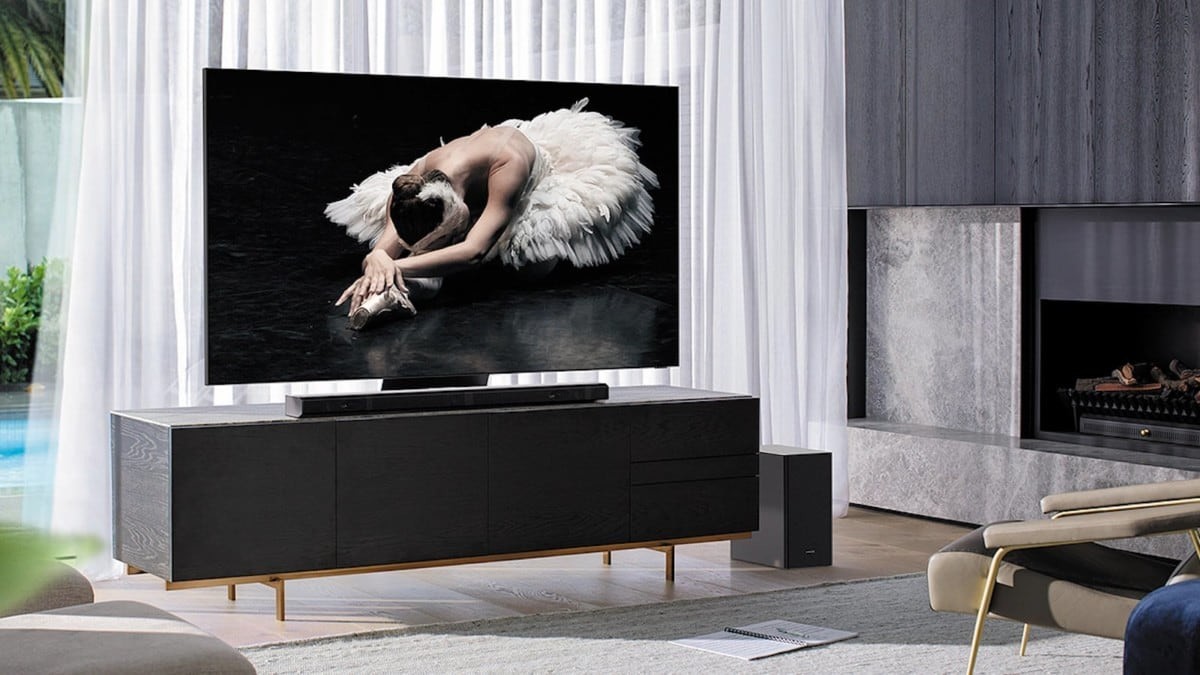 Are the new Samsung TVs worth it?

Overall, the new Samsung 4K and 8K TV lineup offer an array of choices and some exciting new features. If you want to go the 8K route, Samsung has you covered with the Q950TS and Q900TS models. The features, stunning display, and impressive “infinity” design are sure to revolutionize your viewing experience. For anyone looking for a solid 4k TV, the Q95T & Q90T also offer remarkable features and gorgeous pictures. The other 4K models are capable TVs, with less pizazz than their higher-level counterpart. So, yes, the Samsung 2020 lineup is worth investing in.