Amp Is The iPhone Case Your Ears Dream Of 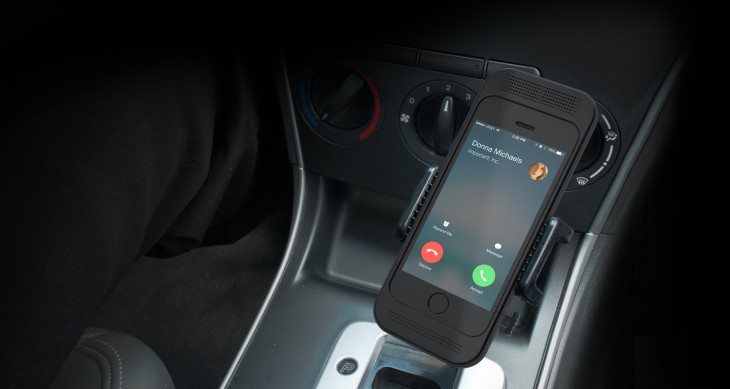 With all of the new phones on the market and their respective cases, it may be tough to find your perfect fit. Some save your phone from drops while others give you more battery but, they usually leave you wanting more features. Amp is here to fill the void, and your ears, with its incredible speaker system phone case.

Amp creates custom made audio in a simple snap on phone case. Its innovation begins with the hardware and exceeds with a smart app that learns your preferences and hearing needs. The creators, SoundFocus, wanted to provide an all in one system; Amp delivers high quality audio to enhance your music, conference calls, or even GPS while protecting your phone.

Users can put the case on their phone and open the app to calibrate their settings. The app has a questionnaire (much like the hearing tests in school) that will give results of your custom audio settings in about a minute. The companion app also picks up the habits of the user for their taste, hearing abilities, and environment. The app determines what the user would like to hear based upon their feedback about what sounds good to them during initial setup. Users can go back to the app at any time and fine tune as they see fit. The initial questionnaire tests the hearing of the user in both ears individually to create a hearing pattern profile for low and high notes. Also, the system has Dynamic Noise Reduction; it can detect noise in the user’s environment and adjust the frequency of the audio spectrum accordingly so your conference calls are clear and crisp. 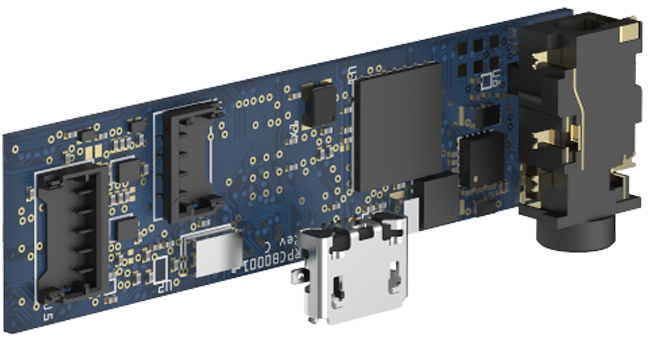 The case is made of three integral parts: two speakers and what the creators call the “brain.” The two speakers are 14x20cm each and fitted to the top of the case. The bottom holds the audio engine, or “brain,” and battery. The audio engine has a 24-bit DAC and Cortex-M4 processor and includes a headphone amp which will deliver deep base and clear high notes. The battery gives the user 7 hours of speaker audio and 20 hours of headphone audio. Even with that amount of listening time, the battery also gives your iPhone 25% more battery (and they hope to give iPhone 6 20%).

The case connects via the lightning charging port and provides another port for charging both the phone and case at the same time. 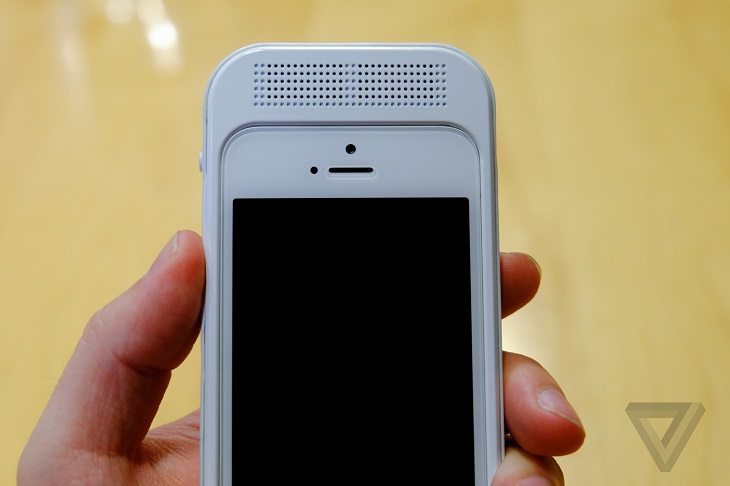 Photo by Josh Lowensohn of The Verge

The great thing about Amp is that it requires no further hardware other than the case itself. There’s no need for cables and plugs; the case charges when you charge your phone. However, some pre-testers think that, despite its lack of hardware, the case is too big for the ever growing iPhone collection. Leah Yamshon of Macworld.com explains that the audio case adds a half inch to each side of the phone. But SoundFocus assure they’re giving the “boom without the box;” the case is a similar size to other extra battery packs on the market (and you don’t need to carry around a glass or paper cup).

Testers of Amp have noticed a difference in sound quality and volume, but are torn between the new audio case or lugging around their Bluetooth speaker, as Josh Ong of TheNextWeb.com says. But, at bottom, Amp is a protective case for your iPhone with a rubber bumper around the corners (which Bluetooth speakers don’t offer).
Amp works with external sound systems as well so you can plug in and amp up your hearing with your noise cancelling headphones. Amp also works with music playing apps, such as Spotify, or even stuff you’ve recorded.

Amp is available in black or white but currently only for the iPhone 5 and 6 series, however; SoundFocus have a poll for which phones they should include next. On the ballet are Nexus 5, iPad Air, Galaxy (S4 and S5), HTC One M8, and others.

Amp is currently available at a price of $79 but the price will go up on January 13, 2015. If you’re super skint then you could get a free Amp after you refer five friends that buy a case (or $10 if you get up to four referrals). SoundFocus expect to begin shipping Amp in Spring 2015.