Crowdfunding has introduced yet another way for entrepreneurs to bring their products to life but a lot has changed throughout the pandemic. There were more campaigns, more creators, fighting for exposure and backers. 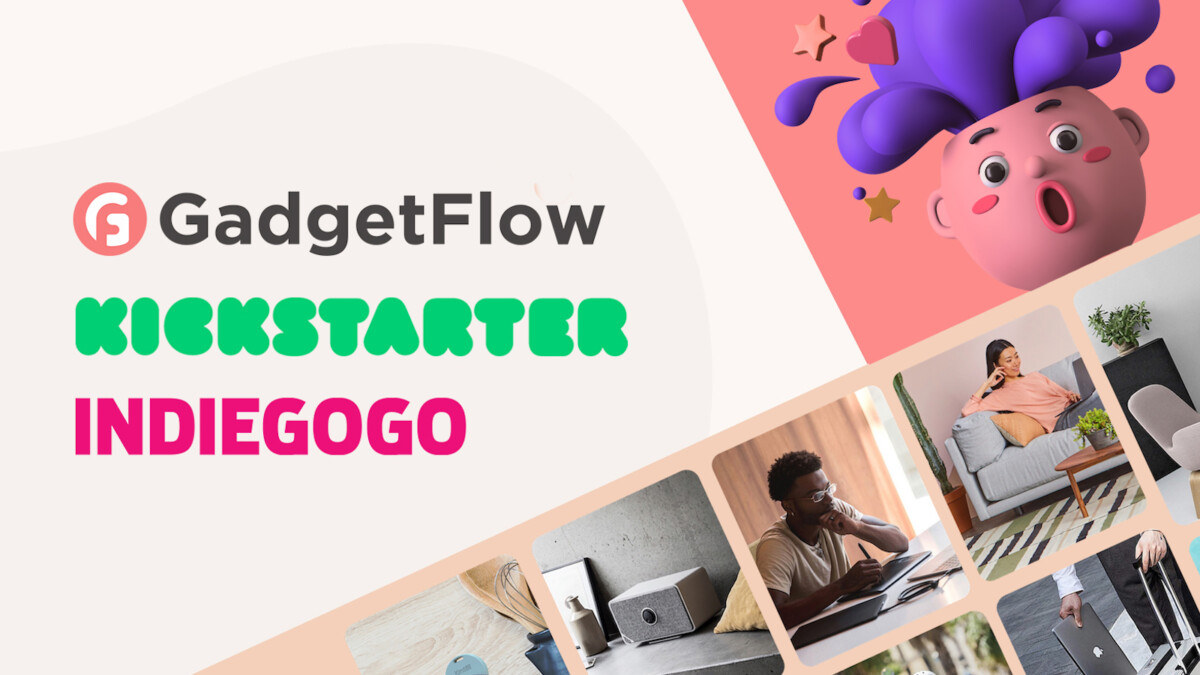 Launching a crowdfunding campaign can be overwhelming, but with the right tools, preparation, and help, it can be life changing. Here at Gadget Flow, we’ve helped over 5 thousand creators launch and promote their campaigns on Kickstarter and Indiegogo since 2012. We’ve created crowdfunding checklists, in-depth guides, podcast episodes, and quite a few webinars with one goal in mind, to provide as much value as possible to the crowdfunding community. A lot has changed since we featured a crowdfunding campaign for the first time back in 2012, and this article is all about getting you ready to launch your campaign in the coming months.

The state of crowdfunding during the pandemic

In March 2020, the pandemic started to affect most countries. With businesses and schools closing, almost everyone was forced to work remotely. For most businesses, that was a challenge. They took a step back to organize their remote work environment (WFH), lowered their goals and KPIs for 2020, let people go, and stopped attending conferences. But that’s not what happened in the crowdfunding industry.

At first, most creators immediately postponed their launch indefinitely. Like most people, they wanted first to analyze and better understand the whole COVID-19 situation and then decide the next steps. But a small percentage of creators decided to move forward with their launch between April and May, regardless of COVID-19. During those months, Facebook and Google advertising fell by over 30%, according to Variety. As a result, advertising your brand on those platforms at the time was much cheaper compared to pre-pandemic months. Cost per click, CPM, went as low as it was 4-5 years ago.

As soon as we realized what was happening with most advertising platforms, we encouraged our customers to move forward with their launch or at least extend their pre-launch campaign to gather more subscribers at a lower price (CPA – cost per acquisition).

Another fact worth mentioning is that most people were working from home, which meant they spent even more time on their computers, tablets, as well as social media platforms. This caused content consumption to increase threefold for most publications, and engagement rates skyrocketed, according to SproutSocial.

The number of new crowdfunding campaigns on Kickstarter and Indiegogo went down rapidly between March and May 2020, which resulted in less competition. The creators who realized this and decided to launch their campaigns ended up raising more money than they initially anticipated, spent less on advertising, and got more backers.

Around June 2020, things started to pick up again, and most creators who delayed their launch pushed their campaigns live during the busiest month in crowdfunding history. It’s worth noting that the majority of backers during that time were first-time supporters of a crowdfunding campaign, adding hundreds of thousands of new backers to both Kickstarter’s and Indiegogo’s communities.

Fact: Crowdfunding is becoming more difficult for creators every year

It’s becoming more and more challenging to launch a campaign successfully. Just by looking at the numbers, the success rate on Kickstarter used to be around 30-35% between 2012-2018, and now it’s closer to 22%. And it keeps dropping every year. The main reason is competition and volume. There are more campaigns launching than ever before, but new backers are not coming in fast enough. Advertising is becoming more expensive every year, with more companies jumping on platforms like Facebook and Google. Meanwhile, backers become more suspicious, and they spend more time researching the creators.

Following best practices is my number one advice as a crowdfunding expert. Most creators are looking for shortcuts so they can launch faster or spend less on advertising. That has almost never worked, and it will simply bring down your chances of having a successful campaign.

There are certain things you need to focus on before you launch your campaign, from focusing on your pre-launch to shooting your video, taking photos, doing PR, working on your campaign graphics, etc. We have a very comprehensive crowdfunding guide here to get you started. Skipping one or more of those steps could be fatal for your campaign.

Communities are more important than ever

Building a community from scratch is not easy, but it’s required if you are trying to scale a brand. The first step is to build an eye-catching landing page for your upcoming launch. Here at Gadget Flow, we prefer wix.com due to its simplicity. With it, we’ve built quite a few pages for our customers, and here are some things we’ve noticed:

How to keep your community engaged

Once you launch your campaign and subscribe people to your newsletter, send an automated welcome email. You can easily automate that through Campaign Monitor or Mailchimp. Saying hello right after they subscribe is important. It’s like knocking at your neighbor’s door when you move into a new building to introduce yourself.

Keep your subscribers up to date and notify them as soon as you know your upcoming launch date, ask them to follow you on social media, share your story, and write a few things about how Kickstarter or Indiegogo works, from creating an account to setting up their desired payment method, to making sure that they understand that the product won’t be delivered immediately because, well, that’s crowdfunding.

In essence, you have to think of your community as your future brand advocates. You have to go the extra mile to keep them informed, happy, and help them feel like their feedback and contribution matter. We’ve seen campaigns with hundreds and thousands of backers capitalizing on their success years after their crowdfunding campaigns have ended because they’ve taken these steps.

Pay attention to your initial crowdfunding backers during your campaign and ensure that you’ve delivered a great product. This way, once you launch your V2 or another product under the same brand, you won’t have to start from scratch, and you’ll have a community to support you and your latest vision.

Sustainable products are good for the environment and Kickstarter likes them

We should all care about the environment, especially with everything that’s happening globally concerning the wildfires and the climate crisis. Here at Gadget Flow, we are committed to becoming carbon neutral before the end of the year, and we have our own forest to offset as many emissions as possible.

When you are building a new product, consider exploring your options for making it ethically in terms of the packaging, components, manufacture methods, etc. Do it for the environment first but also keep in mind that you have higher chances of Kickstarter marking your product as a team favorite and including it into their massive newsletter for free if it’s sustainable. We’ve also created a new category recently called Sustainable Products that includes ethically made and eco-friendly gadgets.

How to market and promote your Kickstarter or Indiegogo campaign

Marketing your crowdfunding campaign is more important than ever. With the competition growing every month, you are competing against thousands of other products. If you’ve done everything right with your campaign and you’ve followed the best practices, then it’s time to get the word out there and promote it to crowdfunding-friendly communities, platforms, and publications.

Reverse engineer the success of past campaigns, figure out which platforms they’ve used, such as Backerkit, Gadget Flow, Kickbooster, etc., and where they got featured, then reach out to those platforms and pitch them your campaign.

Prepare your Facebook Ads before you go live. Have your Adsets and targeting settings ready before you launch your campaign. Make sure to take advantage of all the data you’ve gathered during your pre-launch phase, such as best performing assets, images, texts, highest converting audiences, etc.

Experiment with platforms such as Pinterest, TikTok, Snapchat, and Reddit. Try to allocate a small budget towards these platforms during your launch. I wouldn’t recommend trying those during your prelaunch campaign as the objective is different, and the performance may vary. We’ve seen great results from these platforms for some campaigns that fit the demographics and target audiences. Therefore, they’re worth considering.

The future of crowdfunding in 2022 and beyond

Crowdfunding is here to stay. It’s been over a decade since the first crowdfunding campaign launched, and the industry has been growing ever since. Being in the front seat for over 9 years, I’ve experienced the ups and downs of this industry, and I’m excited to see where it’s heading in the coming years.

Given that you’ve done everything right and are proud of your product, platforms like Kickstarter and Indiegogo can help you go-to-market faster than launching an eCommerce store. There are hundreds of established brands that use the crowdfunding model to validate their next product idea without having to spend hundreds of thousand of dollars or even millions of dollars for research and development.

The best practices for launching a campaign are changing almost on a quarterly basis, so staying informed, working with agencies, and industry experts is highly recommended as you’ll increase your chances of success.

If you are launching a crowdfunding campaign soon, we’d love to help you get ready and market your project to our community.

Evan Varsamis is an Entrepreneur, Founder / CEO at Gadget Flow Inc, Investor and Marketing Advisor at Qrator Ltd and Contributor at Forbes, Inc, Huffington Post and American Express Essentials.
Join the Discussion
Popular Blog Posts
10 Best tech gadgets you need in your life Must-have smart desk gadgets and office accessories Best PS5 external SSD drives out there for gamers Which drone should you buy in 2021? Must-have vacuums for home cleaning