This week's crowdfunding game roundup has something for everyone, even a card game about undead hamsters and a pirate-based RPG. Discover them in the blog. 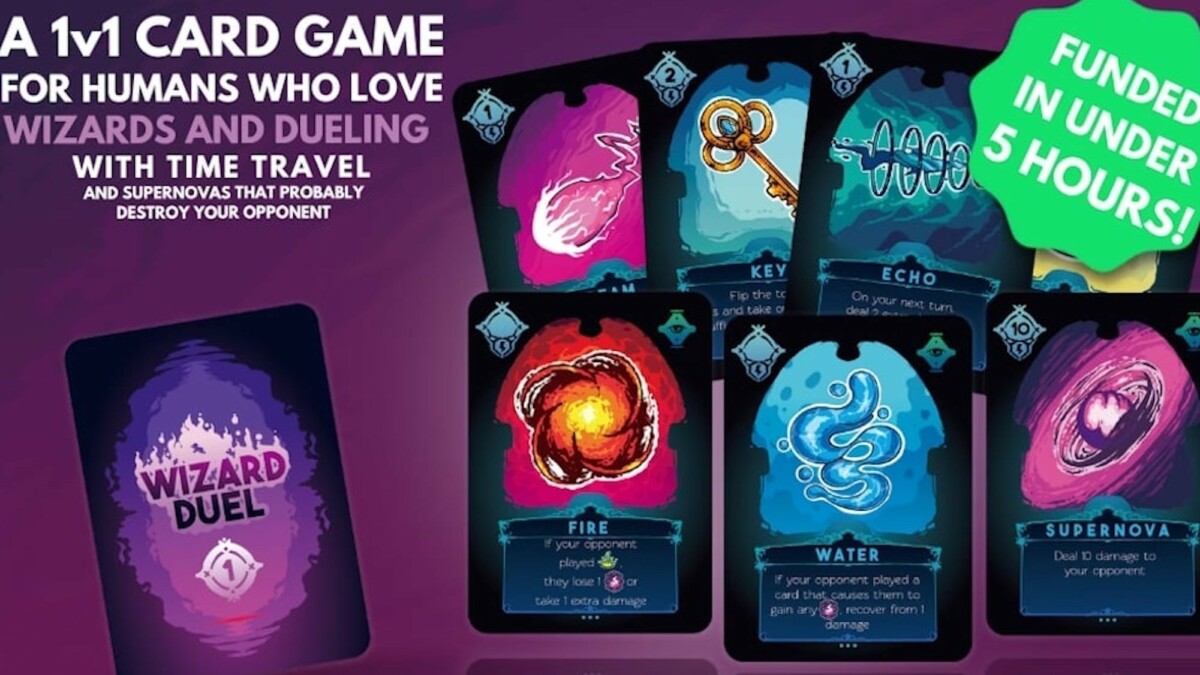 Looking for new RPGs and card games? Whether you’re into zombies or sci-fi creatures, wizards, or pirates, this week’s roundup of Kickstarter games has something for every player. Let’s check them out.

Elevate family game night with Wizard Duel. It’s designed for the whole family thanks to its 2 variants that suit players as young as 4. Adults and kids get a kick out of the fast pace and changing strategy.

Then, check out Nanolith for a unique humanity-saving RPG adventure. Story-based and immersive, it has you stretch each character’s strength to its limits.

Check out the titles below for truly great games.

Love wizards and dueling? Then Wizard Duel is the escape for you. A fast-paced evolving strategy game, it also includes time travel and supernovas that might destroy your opponent.

You can play this 1-on-1 battle game in under 15 minutes. Designed for ages 9+, there’s even a simple variant that works for ages 4–8, allowing even the smallest family members to share in the fun.

What’s more, this game relies on simultaneous action. It simulates real life by allowing both players to act at the same time.

Preorder the base game and expansion pack for $14 on Kickstarter.

If you’re more into sci-fi, end-of-humanity-style RPGs, check out Nanolith. This J-RPG co-op is a skirmish and story-based board game where you choose your own adventure.

Here’s the storyline: the world is in ruins. As a hero, you’re awakened to retrieve your dark memories and help save Neo-Eden by restoring the Nanolith’s power.

As you play this tabletop game, you explore a vast world of adventures that are quick to set up. You also fight in unique encounters, unleash powerful nanoshocks, and unlock new stories, which makes it one of our favorite Kickstarter board games of the week.

Pledge about $81 to help bring this game to life.

Ever wondered how undead hamsters spend their time? Summoning other undead creatures, of course, to earn the title of The Necrohamster.

In this fun, slightly spooky card game, you summon 15 unique creatures, combine their effects, and battle your rivals. You win by collecting the largest horde of undead animals before any player brings forth their eighth creature.

Decorated with whimsical yet eerie artwork, this game is ideal for ages 7+ and 2–4 players. You’ll love the quick setup, fast play, and cool creature combinations.

Back it for about $17 on Kickstarter.

Sea of Legends: Vengeance of the Empires

Pirates of the Caribbean meets RPG in Sea of Legends: Vengeance of the Empires. This swashbuckling narrative-driven sandbox game for 1–4 players has you playing the role of a captains.

You bury treasure, raid ports, fall in love, and combat your enemies as you fight to earn the title of most legendary pirate. Each decision you make has a ripple effect on game events and other players.

Create your own path to victory as you fight off sea monsters and battle competing captains. Updated with a beautiful narrative app, this is one of our favorite Kickstarter board games of the week.

Preorder it for $75 on Kickstarter.

Wicked Ones and Undead Awakening

We’ve featured Wicked Ones and Undead Awakening before, but it’s remained popular on Kickstarter. Centering on a group of monsters who build a dungeon and carry out evil master plans, Wicked Ones is available for free on drivethrurpg.

Meanwhile, Undead Awakening is the expansion for Wicked Ones and is a brand-new game built on the original’s framework. This time, however, you assume the role of rotting undead and raise an army to menace the living.

Preorder it for $16 on Kickstarter.

Love the Kickstarter games in this roundup? Then check out their campaign pages and preorder a few for yourself. These are some of the coolest RPGs and card games we’ve seen.

What games are you currently playing? Tell us about them in the comment section.