Want to kick your parties up a notch? The RevoRoulette robot shot dispenser is sure to add excitement to your next get-together. This cool drink-dispensing robot fills shot glasses and coordinates drinking games for up to six players. And it knows if you've pressed a button too slow or too fast. Keep reading this blog post to find out how this cool new party gadget works. 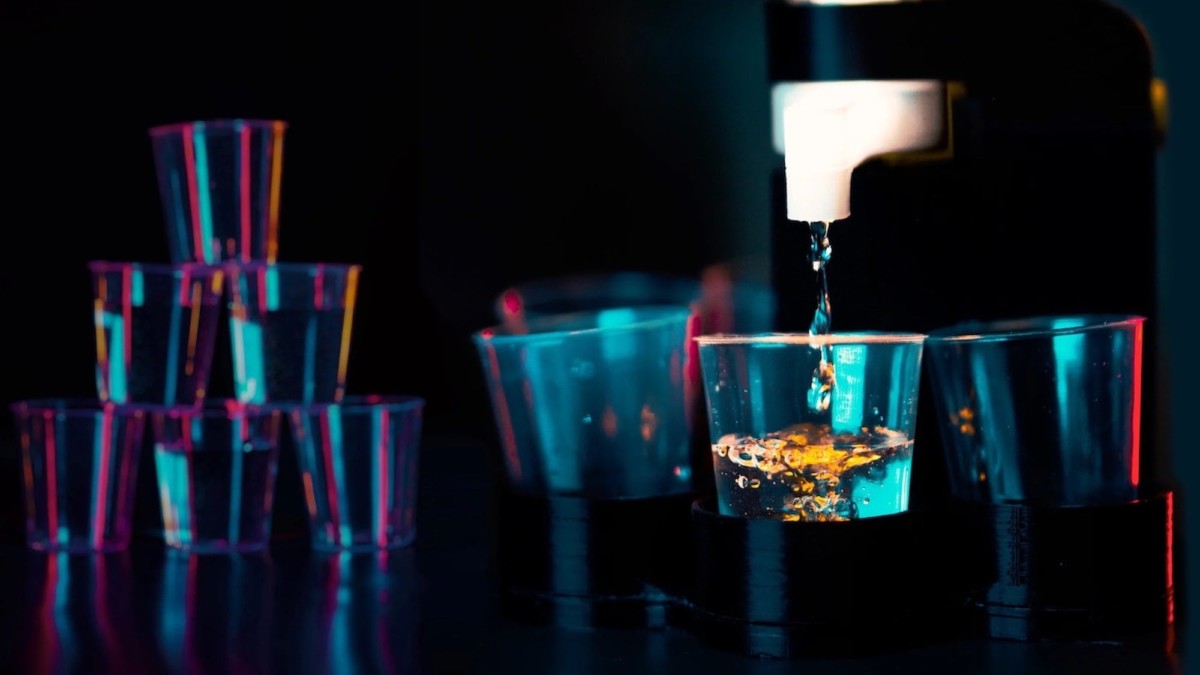 Blow your friends’ minds at your next party with the RevoRoulette robot shot dispenser. This party robot fills shot glasses in two modes and comes with eight party games to make your get-together a blast. Drinking games are fun but the stakes get higher when your bartender is a robot. That’s because this machine automatically pours a shot to anyone who loses the game or breaks the rules.

The RevoRoulette adds a touch of Vegas to your next party. This party robot consists of the main gadget tower encircled by six drink wells fitted with standard-size shot glasses. Each of the wells has a colorful light and switch that detects shots and helps with gameplay. The arm at the top of the tower rotates to fill the glasses with your liquid of choice and you can set it to two modes: Standard and Race. There are also eight games to play, including classics like Spin the Bottle and Whack-a-Mole. Equipped with a USB-C connector, you can charge this party gadget with any compatible charger.

What are the modes?

We mentioned this party robot’s modes above, but let’s take a closer look at them. The Standard mode is for one–six players, and it allows the machine to automatically fill your drink when you place a shot glass in one of the wells with the button clicked. Meanwhile, Race mode is best for two–six players. In this mode, you set a target, like three drinks, and race your friends to see who can drink them first. The robot will pour the set number of shots sequentially and show who comes first, second, and third place. It’s sure to get the conversation flowing.

What games come with this bartender robot?

The RevoRoulette comes with eight preset games that include old classics and some that are sure to become new favorites. Here they are:

It’s an oldie but goodie, and when you play Spin the Bottle with this party robot, it’s motorized. How does it work? The machine’s arm rotates slowly between the players for some seconds. Then it points to one player randomly, the ‘victim.’ You can set the device to pour a drink in that person’s cup or use it as an accessory to another party game, like dares, truths, and other challenges.

For two–six players, this is a game that requires good reflexes. To play, each well on the RevoRoulette lights up in a different color, rotating around the board. If a well changes color to match that of the previous well’s color, everyone has to push their button as quickly as possible. The last player to push the button has to drink. And if a player pushes your button when there isn’t a match, well, then they must also drink.

For Sequence, all the wells light up in a particular color pattern, like red, green, yellow, purple, red, green. Each player gets assigned to a certain color and, when prompted, you must repeat the pattern or sequence. So the player with green has to press the button second and then sixth after the other players have pressed their colors. The game keeps getting longer and faster. If you press your button when it’s not your color’s turn in the sequence, or you’re slow at pushing your button, the shot-dispensing robot pours you a drink.

This game is a serious test on—you guessed it—your reaction times. It works like this: the board starts dark and, after a random delay, all the lights illuminate. Players must press their buttons as fast as possible after the lights go on. The last player to press their button has a drink poured. A drink is also poured if you press the button too early.

Everyone’s favorite arcade game turns into a drinking game with this motorized version of Whack-a-Mole. This time, instead of bopping some moles, you have to click the button of each well that illuminates as quickly as possible. The speed and number of lights increase over time, upping the fun as you go. This game makes RevoRoulette one of those gadgets you never knew you needed.

For one–three players, this game is just what it sounds like. A light, or the “rat”, moves around the wells erratically. Players must press their button if their well is lit to catch it. The first player to catch five rats has a drink poured. Otherwise, the losers drink.

What drinks can you add to this robot shot-dispenser?

From tequila to rum, you can fill this drink-dispensing robot with pretty much any kind of liquor. But that’s a given. More surprising additions include lemon juice, vinegar, drinks spiked with chili sauce, and pickle juice—as a prank.

Take this drink machine to any party

You aren’t limited to your own house parties with this party robot. Thanks to its USB battery bank option, you can take the RevoRoulette to a friend’s bachelor or bachelorette party, weekend hangout, birthday party, and more. The possibilities are endless with this cool gadget.

The RevoRoulette robot shot dispenser takes your parties to a whole new level. This drink-dispensing robot automatically fills your friends’ shot glasses and leads you through eight fun drinking games. The challenges are tough since they rely on keen reflexes and timing, which will undoubtedly weaken as the night goes on. But this robot is sure to be the life of any party you take it to.

The RevoRoulette robot shot dispenser typically costs $54.97. You can currently preorder it on Kickstarter for £28 (around $38.68). What are some of your favorite party games? Let us know about them in the comments.