This Drone Racing Kit Puts You in the Cockpit

Once the novelty of learning to fly starts to wear away, many drone owners are content with using their quadcopter for aerial photography. Folks with a need for speed require something less sedate.

Enter the world of drone racing, which already has its own world championship. While the drones of Bebop and DJI are too expensive to crash, one new entrant plans to make multiplayer drone racing an affordable sport. The startup, named Autonomous, has just raised funding for a drone racing kit that includes two quadcopters, and virtual reality headsets for piloting your drone in first-person view.

While the included drones are no match for the pricier competition, they do seem well equipped for racing. Each measures about 12 inches square, with a rechargeable battery that lasts for around seven minutes. They travel at a fair lick, and an integrated 720p camera (2 megapixels) beams back live video to the companion smartphone app

Competing pilots view the action through the supplied virtual reality headsets. As with Google Cardboard, the user simply slots in their smartphone to enjoy the show. It gives racers the full Top Gun perspective, and the app lets you record your own highlights package.

You can use street furniture and signposts to mark your track, but the kit also provides nine flags and fifty cones for this purpose. It means that racers can create their own custom circuit.

The most impressive aspect of this kit, however, is the price. All of the above will ship to early-bird backers of Autonomous’ IndieGoGo campaign for just $149. Without the cone and flags, the kit is just $99. 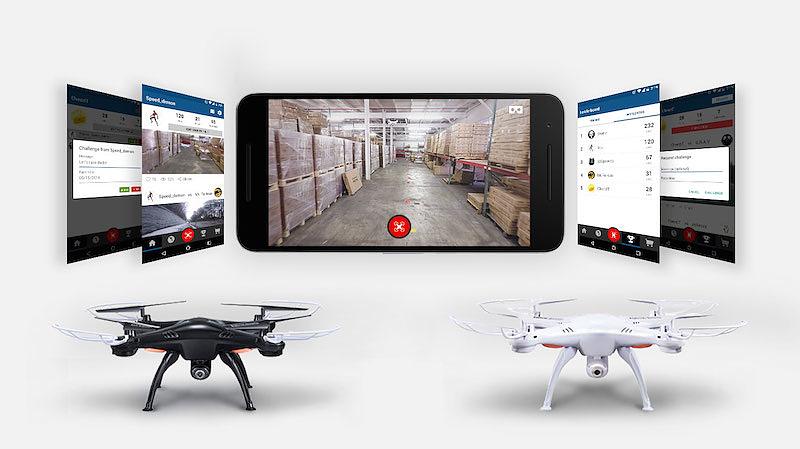 It almost sounds too good to be true, especially considering the modest $38,000 raised to fund production. That said, Autonomous plans to start sending out the first kits next month, so prospective purchasers will not have to wait long for hands-on reviews.

Do you fancy a go at drone racing? Tell us in the comments where you would compete and who your competitors would be!