Fly With The Best Of Them With Bionic Bird 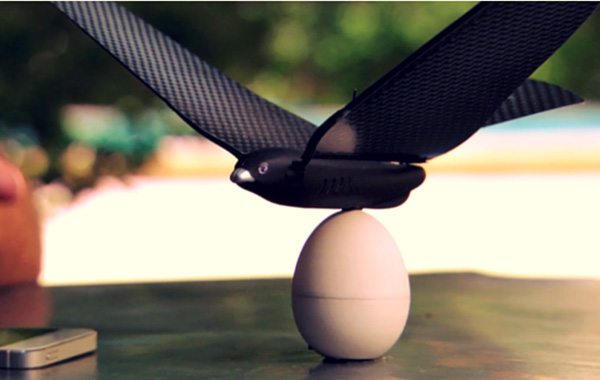 Edwin van Ruymbeke has always had a life of birds. He’s had a vast interest since childhood and his fascination has never faltered. After becoming an aeronautical engineer, he’s now able to awaken the bird fascination within all of us with Bionic Bird.

Birdwatching is in Edwin van Ruymbeke’s blood- his father and grandfather were the inventors of the first mechanic flying bird complete with flapping wings. He’s carrying the tradition into the 21st century with Bionic Bird- the first smartphone controlled flying (and furtive) bird drone. 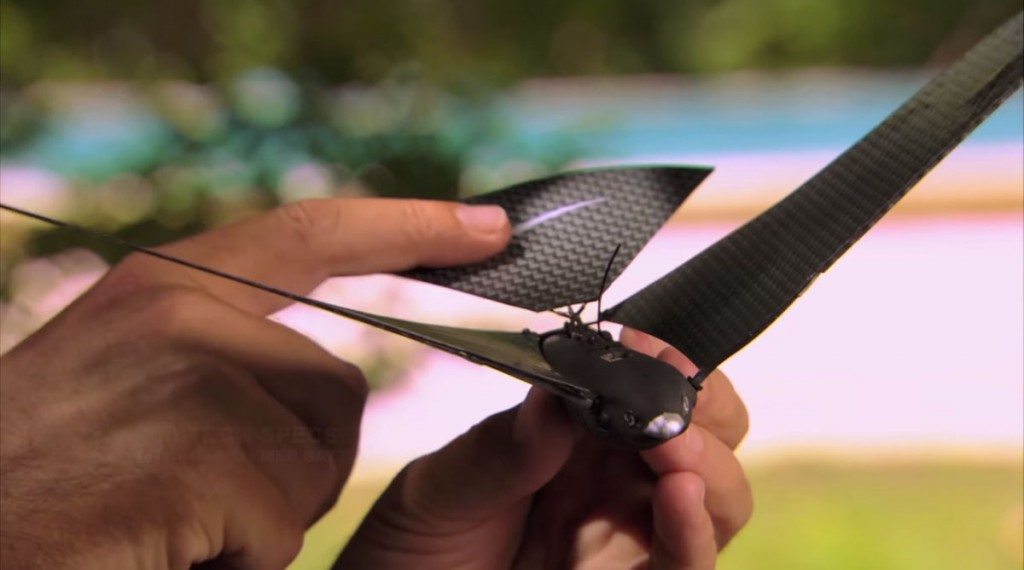 Bionic Bird is lithium polymer battery powered and charges with a unique charging station- an egg that weighs just 36 grams (and is pocket sized!). A magnetic tip on the egg ensures Bionic Bird will remain in place for the quick charge of just 12 minutes and can handle up to 10 full flights before needing charging itself (for one hour for full charge). It can take flights up to 100 meters. The Bluetooth operated bird can fly at full speed for six minutes (although a normal flight is usually 7.5 minutes) or a total distance of 1.8 kilometers. Although this doesn’t seem like much, there has been no device that can achieve never before seen moments and attract birds like this can. 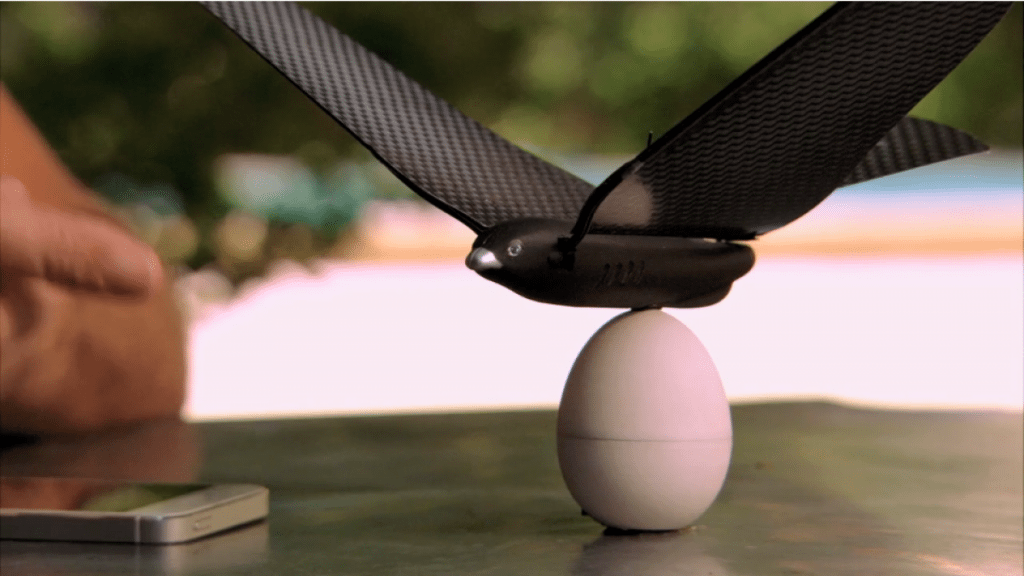 To use, you’ll need to turn Bionic Bird on, make sure your app is ready to go and the wings are flapping, and simply throw the device like you would a paper airplane. Simple gestures and gyrations of the smartphone allow the Bird to do aerial stunts and even glide. Bionic Bird can soar at an amazing 12 miles per hour keeping up with any and all birds in sight. Bionic Bird is not suitable for adverse weather conditions, which include rain or wind above 10 knots. 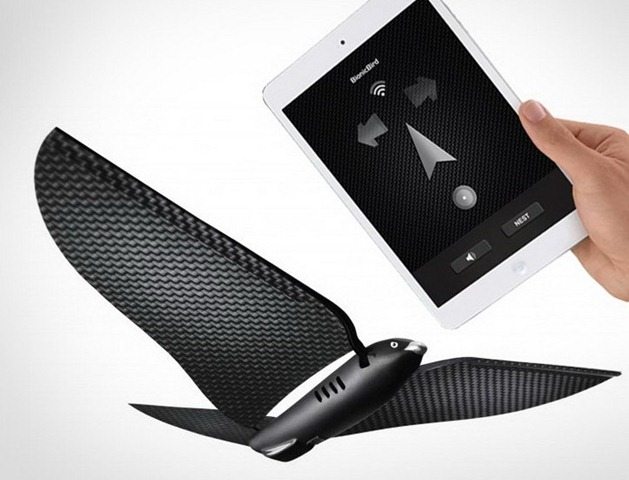 The Bionic Bird app, which is free in the App Store, allows the user to direct and control both the speed and mode of flight by being intuitive yet very sensitive. Using Bluetooth 4.0, the range from the smartphone to Bionic Bird is 100 meters. Users can start by choosing either easy or expert mode, or even multiplayer. The easy mode has touch throttle control and the bird is steered by tilting the smartphone. Expert goes a touch further and has a right or left-handed selection. This is all made possible by a magnetometer and accelerometer. Additionally, the app provides a battery indicator and the Bluetooth strength. 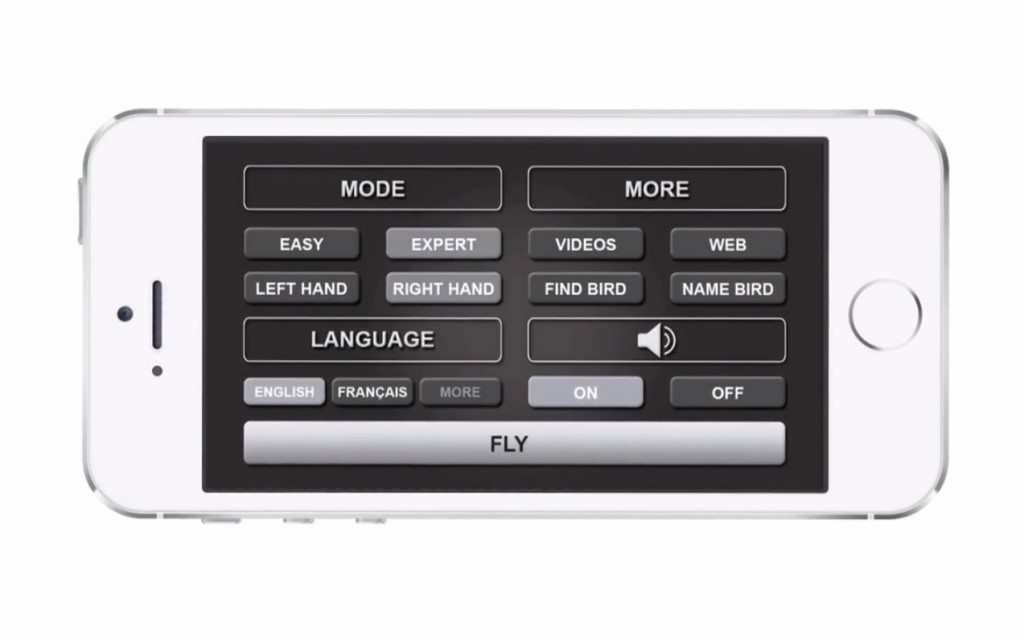 The app is currently compatible with iPhones 4s and 5 and iPad minis. The engineers and developers expect it to be ready for iPhone 6 and Android phones in early 2015 and Windows devices by summer 2015. The app itself won’t be ready until Christmas Eve, but the team have alluding to interesting features such as language selection, finding birds, or even naming certain birds.

Just like their warm-blooded counterparts, Bionic Bird is built for flight. Its dimensions have been perfected for a weight to power ratio (which will increase as new features and abilities are added). The current version is 17cm long and 33cm wide at 9.2 grams, which includes the 1.2-watt motor that does 55,000 rotations per minute. Unlike real birds, Bionic Bird was built with intemperate conditions and replacement parts in mind. The body is foam to handle any impacts (especially for beginners) while the tail and wings are made of replaceable carbon fibre. An extra set of wings, along with an instruction manual, the charging egg plus USB cable, and aluminum strips to perfect wing balance are all included in the box.

van Ruymbeke and his team haven’t stopped after their extremely successful Indiegogo campaign that obliterated their $25k target with $155k+ (621%!)- they’ve already been planning for the future. The team would like to add a more agile system for Bionic Bird that allows for stationary flight or make similar bird sounds to bird passersby or gesture control via a smart watch (but you might look like a bird while controlling it). By Winter 2016 version 2.1 should be out which will have live video so you can see what your Bionic Bird sees- and react accordingly. With such an incredible horizon, 7.5-minute flights seem quite worth it. 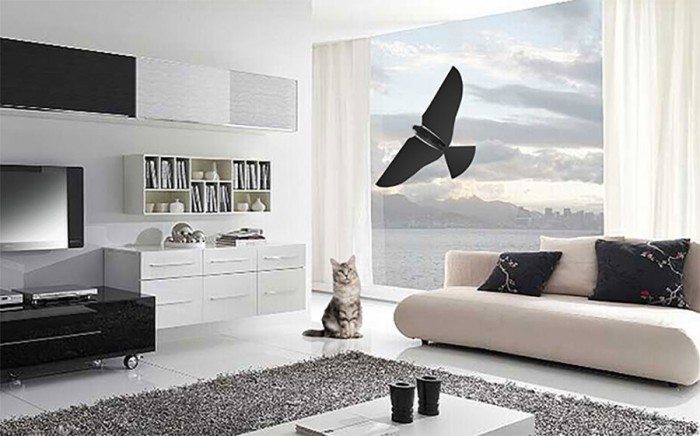 However amusing and clever Bionic Bird may be, reviewers have not missed the blatant details. As Dan Moren of Popular Science mentions, less than ten minutes of flight for a 12-minute charge is a rather unfortunate ratio. My iPhone even has a better ratio than that. Others see that, although version 1.0 may not quite be what consumers want, the future features will essentially make Bionic Bird a “spy drone that blends in” as Natasha Lomas from TechCrunch writes.

The beauty of Bionic Bird is that it is designed, unlike most of today’s gadgets, with nature in mind. It not only blends in, Bionic Bird attracts birds and allows them to interact (if you’re looking to shoo away the birds, you might want an Angry Bird). With new versions including a HD video camera, bird observation will be taken to a new level for both the enthusiast and the ornithologist.

If you weren’t lucky enough to be a part of Bionic Bird’s Indiegogo journey (like getting one for $100 or a “flock” of six for $490) then don’t fret. You’re able to order Bionic Bird now with deliveries beginning in March next year. Retail price is $149. I haven’t been this psyched about a gadget in a while- hint, hint, Santa.

Ashley Timms is an editor at Gadget Flow where she gets to write about the most incredible products in the world. When she’s not writing, she’s producing fine art dog photography.