Get ready for a new cutting-edge gaming monitor. Samsung is here to deliver with the Odyssey Neo G8, featuring a sci-fi aesthetic, CoreSync immersive lighting, and more. It provides incredible specs without taking over your desk. Read on to find out more. 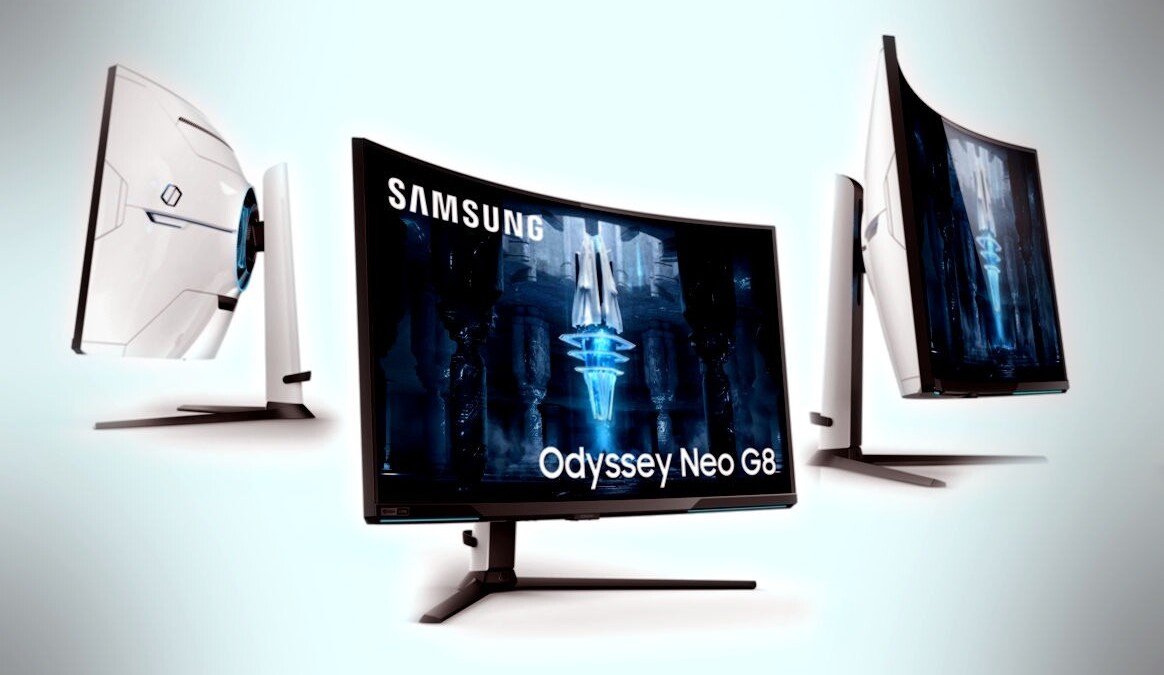 Not every PC monitor needs to be big in order to deliver a superior viewing experience. For limited workspaces and desk setups, a smaller monitor is usually necessary or perhaps preferred.

Well, this week, Samsung is showing off one of its newest monitors: Samsung Odyssey Neo G8. It’s a fantastic option for anyone looking for high-end performance—be that for gaming or other kinds of demanding tasks.

Want to know more about this cool and curvy 4K monitor? Let’s check it out!

It blows away expectations with exciting specs & performance

The Samsung Odyssey Neo G8 goes beyond what we normally expect to see for a monitor like this. In fact, Samsung says it’s the world’s first monitor to feature 4K resolution (at 3,840 by 2,160) with a 1000R curved screen and a 240 Hz refresh rate.

It turns heads with a super-sleek futuristic aesthetic design

Another noteworthy aspect of the Samsung Odyssey Neo G8 is its unique and eye-catching design. It features a stylish sci-fi white exterior that will look great on any desk.

While it might fit best in a gaming setup surrounded by neon lighting, it will still look sharp in any room in general. If you’re looking for a PC that looks like a piece of a spaceship, this might be your jam.

Last, but surely not least, is the inclusion of CoreSync lighting technology. This technology is a particularly nice addition to the Odyssey Neo G8.

Located on the back of the monitor, it detects on-screen colors and projects them to enhance your immersive experience. It’s a super-fun feature that we’re welcome to see included.

While we know quite a bit about the new Odyssey Neo G8 monitor already, there are still some details we’re waiting to learn more about. For example, pricing has yet to be announced. However, we expect it might land on the higher end of the pricing scale.

We’re also waiting for more information about a release date. Samsung will likely answer more of these questions by the end of CES week.

What do you think of the new Samsung Odyssey Neo G8 monitor? Let us know in the comments below!