Sybrillo Is an Intelligent Gimbal for Stable GoPro Footage

There is surely no camera more versatile than a GoPro. From world-class snowboarders to the regular Joe messing about in his backyard, they allow anyone to take cinema-quality footage. Furthermore, they are affordable for filmmakers on any budget, and compact enough to come along for any ride. The only problem is that shooting at 4K resolution magnifies shake.

Sybrillo is a self-proclaimed “next generation GoPro accessory” that should put an end to such instability. This small gimbal has three precision, electric motors that compensate automatically for every bump and jolt. It also acts as a robotic filming arm that can be controlled from afar, or set to follow preset instructions.

Made from an injection-molded polymer, Sybrillo weighs just 300 grams and works with all regular GoPro mounts. In stabilization mode, the gimbal rolls, pans and tilts to keep the action steady. This is very similar technology to that employed by the monstrously expensive camera arms used to film moving cars in movies and commercials.

The gimbal is controlled via the companion smartphone app for iOS and Android, which has many more features to offer. Remote control mode allows the user to move their finger across the screen to direct the camera.

Sybrillo can also capture a Google Streetview-style image for virtual reality viewing, rotate slowly during time lapse shots, or follow pre-programmed custom movements. Fittingly for an action-cam accessory, the gimbal runs on its own battery and is entirely waterproof. 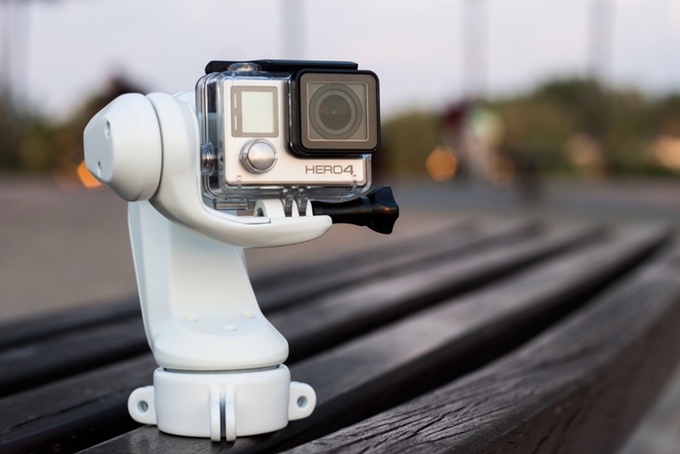 The four-person team behind Sybrillo is currently raising production funds for the project through Kickstarter. While backers can pre-order the gimbal for $229, the eventual retail price is $400. That would make the Sybrillo more expensive than the camera it stabilizes, but for committed filmmakers, this versatile support might be worth the money.

How would you use the Sybrillo?

Mark is best known for writing about apps, but he also loves the tactile, hardware side of technology. Being a professional photographer, he's pretty handy with a camera, and he's a self-confessed tweetaholic.
3
Join the Discussion
Latest Blog Posts

If you love extra-strength cold brew coffee or an iced cappuccino on summer mornings, you’re reading the right blog. Because if you got weirdly into coffee over the past couple of years, you undoubtedly want to create tastier cold coffees,..
Popular Blog Posts