Celebrate the moon landings with the SVPER11 3D watch

It is 50 years since Neil Armstrong took one giant leap for mankind — and it remains one of our greatest achievements. The new SVPER11 3D watch celebrates the moon landings with a face that mimics the lunar surface. 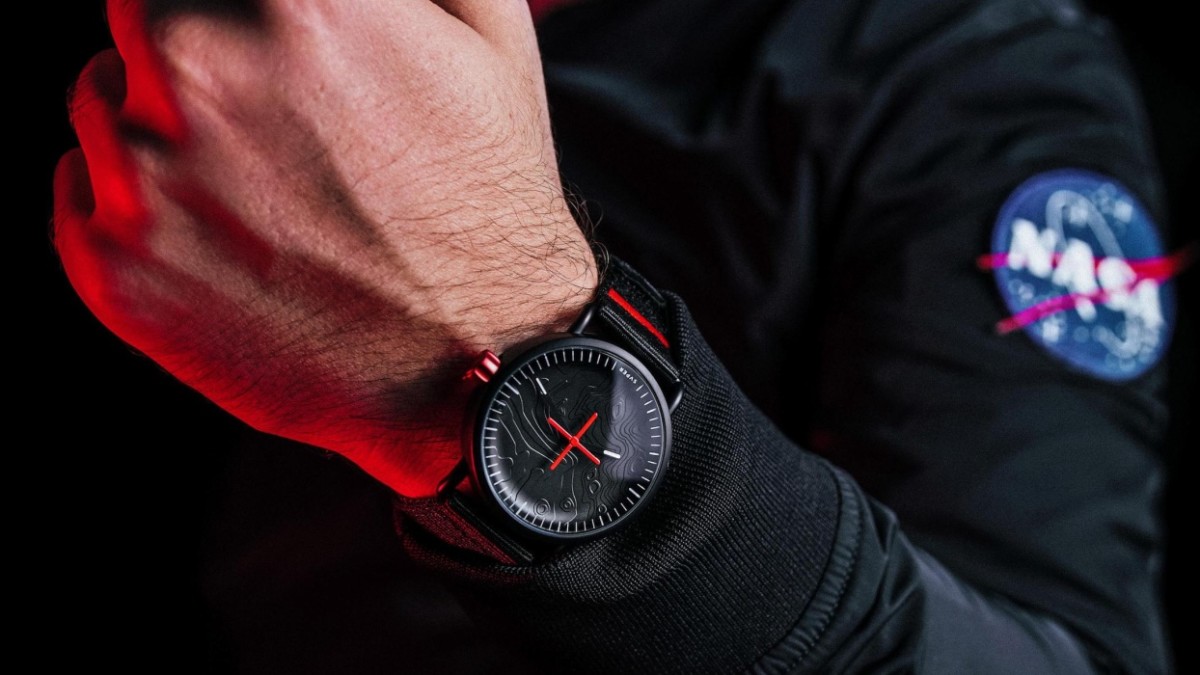 A lot has happened in the past fifty years. Presidents have come and gone. Music and fashion have changed beyond recognition. Technology has also seen a remarkable transformation — the cassette player had only just been invented at the beginning of this timeframe. However, the greatest progression of all has been in science.

From health to physics, there have been countless breakthroughs. But to this day, almost nothing tops the moon landings in 1969. To honor that historic event, the SVPER11 3D watch has a face that mimics the topography of the lunar surface. It’s a must-have for NASA fans and a stylish addition to any outfit.

It goes without saying that most watches have a flat dial. A 3D watch breaks the mold by standing out, quite literally. While some of these timepieces can end up being a little chunky, the SVPER11 is seriously svelte.

How come? It’s down to the ingenious manufacturing process. The dial is made from carefully cut brass. Each layer measures just 0.1mm thick. The layers are stacked to form a topographical pattern that perfectly matches the Sea of Tranquility — the landing spot for Apollo 11. A press then applies 300 tons of downward force to turn the individual layers into a solid disk. 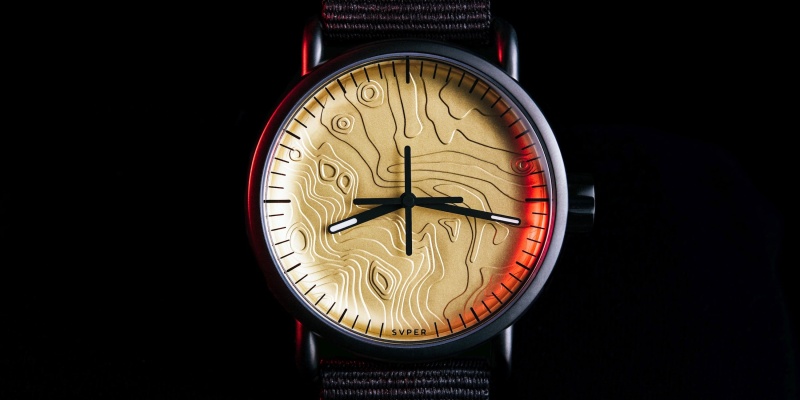 The topographic face of the SVPER11 3D watch

Look around the SVPER11, and you will notice many other small details that evoke the moon landings.

The red crown, for instance, looks exactly like the oxygen valve on the Apollo 11 spacesuits. In place of a standard second hand, the dial has a red cross. This circles over the lunar surface on the face, emulating the lander’s radar. 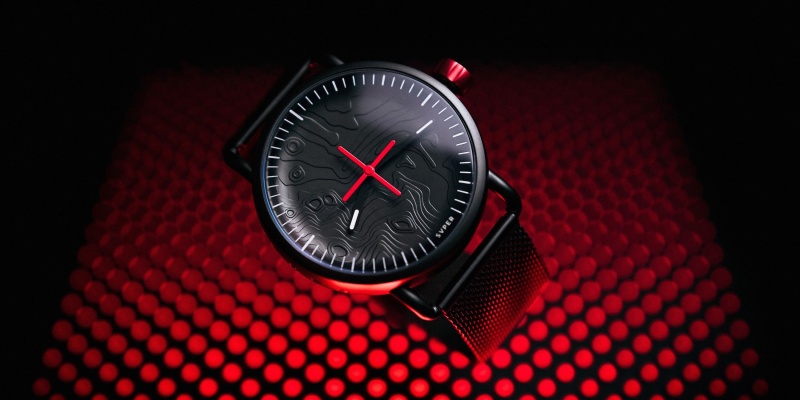 If you look on the reverse of the military-grade nylon wrist strap, you will even find the co-ordinates of the landing site. 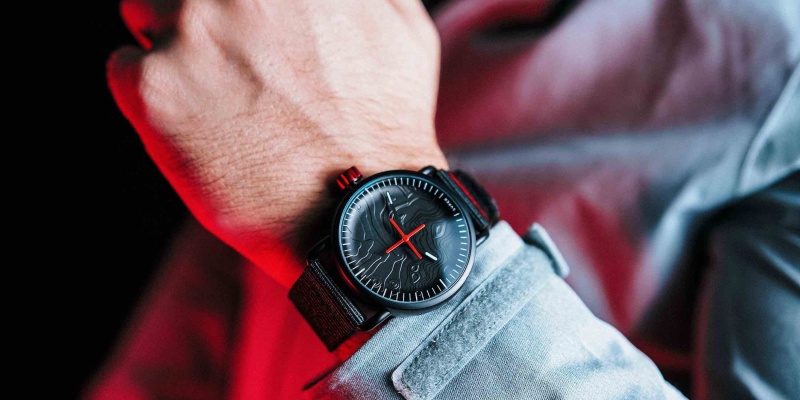 Elsewhere, the watch has a crystal dome with the minutes and hours printed on the glass. This makes the markers seem like they are floating above that topographic surface. 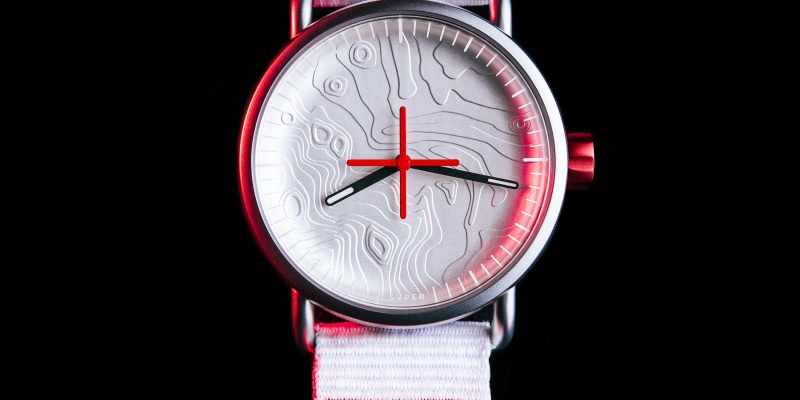 All of this comes packaged in a stainless steel case, with a technical ceramic backplate. This combination makes the watch waterproof to 164 feet. 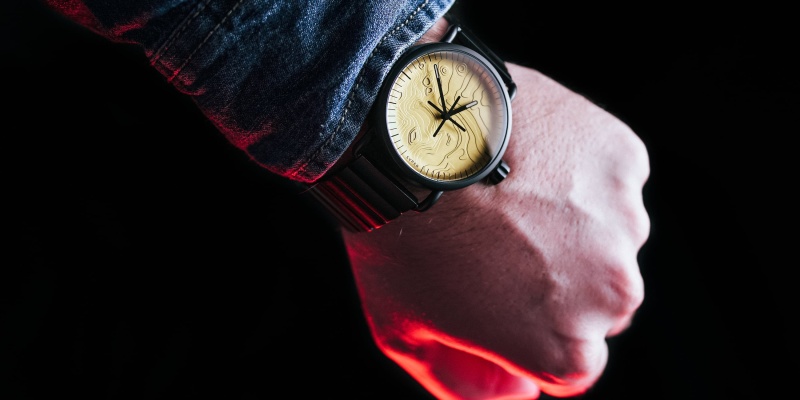 Checking the time with the SVPER11

Available in four different color schemes, the SVPER11 is a pretty remarkable timepiece.

“We’ve explored many design elements and motives, but the one that was the most captivating was the Apollo11 landing site – The Sea of Tranquility. Based on the NASA maps of the moon, we’ve created a 3D topographic map, which became the face of the watch.” — SVPER

The SVPER11 isn’t just a nice way to remember a great day in history. This 3D watch is beautifully put together, surprisingly durable and very stylish.

Having already expanded the range of colors to four, we may see more hues arrive at some point in the future.

You can find SVPER11 raising funds until October 9 on Kickstarter, where you can pre-order the 3D watch for $191.17. Shipping is expected to commence in December. That means you should get your SVPER11 while we are still in the 50th anniversary year of the moon landings!