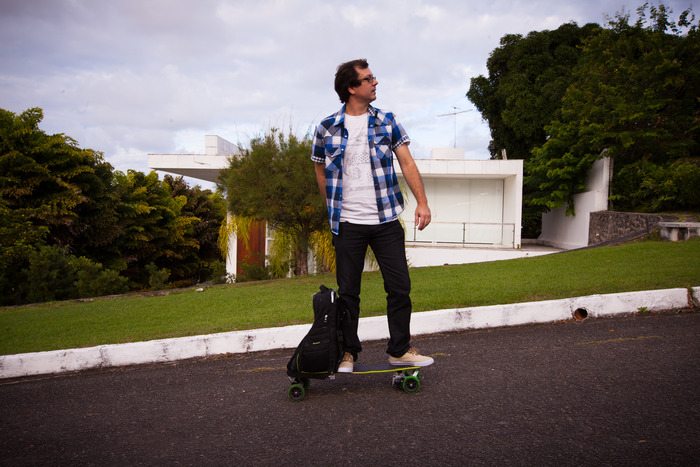 Getting from your city apartment to the subway is always tough- first you have to pack everything into a massive bag and then lug it to the train. It’s heavy and makes your walk even longer. Then, after your delayed train, you have to walk another mile or so to get to your destination. There are traffic lights, crowded sidewalks, and your bag just gets heavier. Movpak is here to help (and add to your love of skateboards.)

Movpak solves two major solutions of our commute woes: time spent walking from transportation and lugging everything we need. Not only is it a great back pack with a device charging station and plenty of room, the Movpak doubles as a remote controlled skateboard as well. Say goodbye to long and arduous walks to the subway- Movpak will get you there in less time with less effort.

The creators of Movpak, Hugo, Ivan, and Felipe, discuss the last mile problem: public transportation allows people to travel rather quickly but usually doesn’t reach the front door of their destination. There’s one last mile that we must walk to get there- through traffic and crowds of people. And why walk when you can ride a skateboard?

The Movpak is made of two essential elements- a backpack and a skateboard- which both go above and beyond- to remedy and expedite your journey. Movpak has three modes of use: it can be hung around your shoulders, ridden like a skateboard, but can also be used as a roller bag when it’s heavy but riding is not permitted. 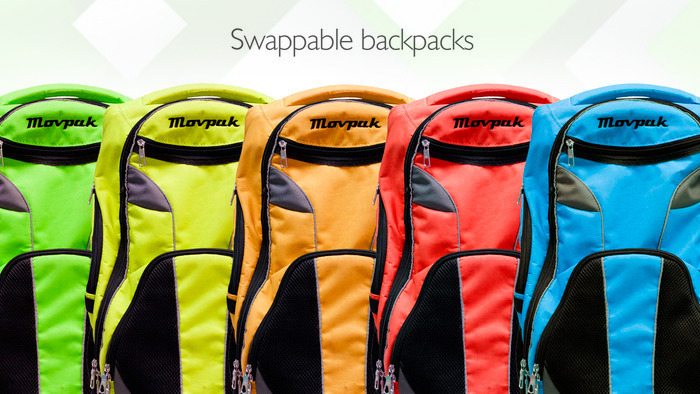 The backpack is more than just a backpack. It looks sleek but packs a punch- it has ample storage, strong (padded) straps that won’t dig in, and even a charging station for your devices. It comes in a variety of colours and a new design called Switchboard.

Movpak has a full charge lasting 2 hours of use. It can be recharged simply in any household plug. Its range is about 9 miles and can go as much as 15 miles per hour so your last mile suddenly just got a lot shorter.

The total weight of the Movpak is 17 pounds (~7.7 kg) when empty. This can seem like quite a bit, but, as one reviewer mentions, this is when you stop carrying and start riding or rolling the Movpak. The skateboard is made of wood, metal, and Kevlar, so it’s as tough and flexible as could be. Although it should be kept out of very wet environments (it is electric, after all!), the engine in enclosed so it can be used in light rain. Perhaps the creators will take a tip from Aquapac’s Stormproof bags and add some more versatility for the user. Also, the creators explain that Movpak should not be used as a regular skateboard as it’s not meant for tricks or skate parks.

We’re not all Tony Hawk so there are some concerns that the skateboard may take more skill for people who have never been on one. However, the creators assure the user that “because it has a motor, with brakes, that prevents the Movpak from sliding when you get on, also while at a stop” and “you can press your foot and calf against the rear part of the backpack. This will give you added support, stability and provide you more balance.” This makes me think that not only I can learn, but so could my parents. 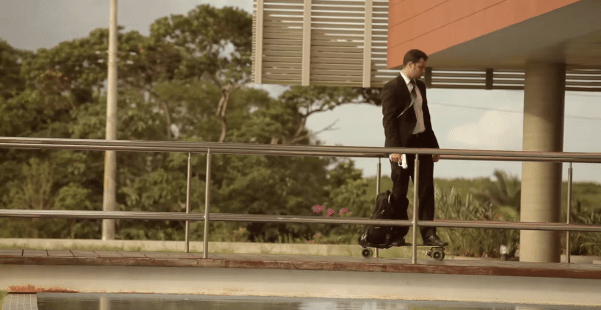 The Movpak is great for going anywhere. It’s small enough to fit in the overhead storage on a train or a plane. You can glide from terminal to terminal with ease. It’s great for university campuses, your work commute, meeting up with friends, or anyone that uses public transportation. Even some photographers think there should be a version to carry all of their equipment because it’s that good. Movpak will make your journey much easier and shorter. Time yourself both with and without Movpak and see for yourself- you’ll even have enough time to stop and check emails on your way.

Movpak is currently on Kickstarter with a goal of $100,000. The donations can range from $1 to get a shout out on their website to $8,890 for 8 Movpaks with helmets. Movpak gifts start with donations of $1,190. According to the donations, Movpak will retail for $1,999. They’ll begin shipping to backers in April 2015.