Is your smartphone camera roll filled with blurry low-light images? Despite what you may think, there is something you can do about it. While all the latest smartphones all feature great night mode options, you can also use clever gimbals and tripods to help you get the most out of the device you already own. 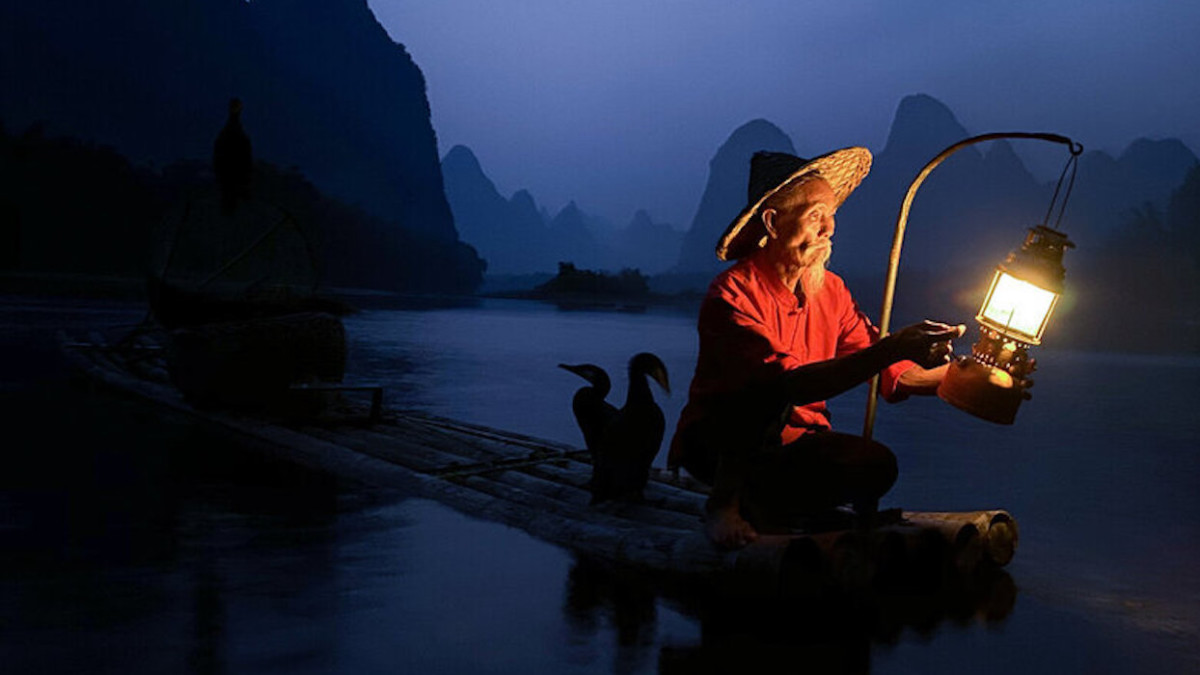 Night Mode Capture with the Bright Lantern in Focus

When it comes to capturing great photos, there is one thing you must have: access to quality light. Not all light is created equal, but some light is better than no light. I’m sure you’ve been there before; trying to capture your friends’ antics in a dimly lit restaurant only for your smartphone to deliver back a blurry and lackluster image full of noise. That is unless you’re the owner of a newer device that can capture the perfect night mode shot.

The reason for this is that the camera’s sensor requires light in order to capture the image. The less light you have, the lower the quality of the details. You’ll notice a distinct difference when photographing something in full sun. The reason low-light images can come back poorly is that the sensor requires more time to gather the light of what you’re trying to capture, thus slowing the shutter speed. This results in blur as well as noise, or grain. 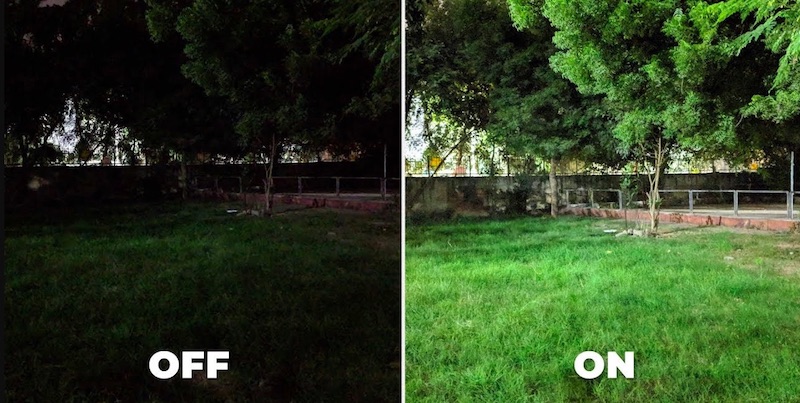 If you have a camera, you can adjust the shutter speed and aperture to allow the camera to gather more light. There are also some smartphones and accessories that let you manually adjust your settings for better low-light images. But, typically, most smartphones in the past haven’t had the power or capability to sense and capture in low light scenarios.

There is one thing that will greatly help if you’re faced with a photo-worthy situation that has low light. The trick is stability. The more still you can keep your smartphone, the better your chances of achieving a non-blurry image. Of course, this won’t help you with grain, but you could try to fix grain in post-processing. An out of focus or blurry image cannot be recovered to be in focus.

Now, you have a couple of options here. You could choose to buck the smartphone camera trend and lug around a fully capable DSLR to all your nighttime adventures. Or, you could upgrade to one of the latest smartphones that feature night mode, including the iPhone 11 Pro, Google Pixel 3a, and Samsung Galaxy Note10. Even if you’re not looking to upgrade, there are plenty of smartphone gimbals and tripods that can help you achieve quality photos even in low light.

Which smartphone has the best camera?

As of now, the iPhone 11 Pro is considered to have the best camera.

This has been an endless debate that is met with opinions from expert photographers and dedicated brand enthusiasts alike. There are plenty of Apple fans who are constantly asked why they don’t ditch the device for the superior camera on the Galaxy. But then Apple releases yet another device to take things up a notch. And then Google releases yet another Pixel to impress everyone. With night mode introduced as a staple feature, the race is only getting closer. 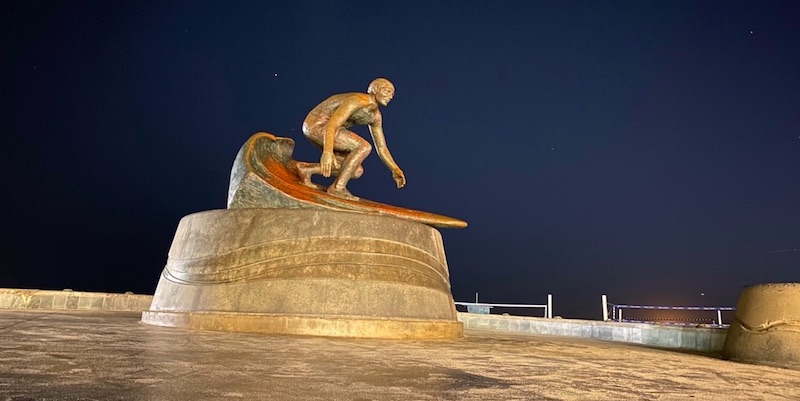 Technically speaking, there is one smartphone camera that’s better than the others. This all comes down to specs. The Pixel 3a from Google is widely regarded by many as having one of the best cameras. But, that was until the iPhone 11 Pro was announced. However, with the release of the Pixel 4 on the horizon, it’s clear this will be a never-ending battle of the specs.

Apple’s Special Event for the iPhone 11 Pro and iPhone 11 Pro Max was all about how applicable the term “pro” is for this device. Along with the standard improved battery and speed thanks to the A13 Bionic chip, Apple introduced its three-camera design. Both versions include a wide camera, a telephoto camera, and a new ultra-wide camera.

Along with the new editing features of iOS 13, it’s clear Apple is positioning the iPhone 11 Pro camera to be as powerful and professional as possible. But, does that mean it’s better than all the rest?

Google Pixel 3a and 3a XL Smartphones

Unlike the other two main contenders, the Pixel 3a has just a single camera on the back. The 12.2MP dual-pixel camera may not seem like it has all the bells and whistles, though this smartphone previously held the top spot for smartphone cameras for some time. It comes with dual-pixel phase detection for super-fast autofocus. It also offers optical and electronic image stabilization.

The Pixel 3a certainly has reasons for being widely accepted as having one of the best cameras. But, this was for single-camera smartphones. It’s more accurate to compare the Pixel 3a to the iPhone XR, though it doesn’t have night mode.

Also sporting a three-camera design on the back, the Samsung also uses the term “pro-grade” to describe the Galaxy Note10. Like the iPhone 11 Pro, it comes with an ultra-wide camera, a wide camera, and a telephoto camera. The ultra-wide has a 16MP sensor while the other two have a 12MP sensor.

According to Samsung, the Galaxy Note10 “knows how to pull in more light to brighten up dark scenes or keep things sharp in bright daylight.” One key element of this smartphone’s camera is Scene Optimizer. It’s able to detect popular subjects within the frame and automatically apply focus.

What is “night mode”?

This newer feature for smartphones has been around for a little while. What it does is intuitively take into consideration that the scene is inherently darker than your midday photos. For smartphones without night mode, you probably notice that the darker areas (the shadows) are way too dark. Likewise, the lighter parts of the photo are way too bright. This creates a very uneven image, reducing the overall quality. Night mode works by automatically adjusting the exposure when you take a photo and comes as a feature in the iPhone 11 Pro, Galaxy Note10, and Pixel 3a (as well as the Max, Plus, and XL versions).

Which smartphone has the best night mode?

Apple and Samsung both call this feature Night Mode while Google calls it Nightsight. Regardless, the features are essentially the same; these smartphones capture impressive images even in exceptionally low light. Apple’s entire theme of going “pro” involves retaining the natural elements of the world around you. This means keeping a natural look to the image even in low light.

While perusing the city for dark areas, each one darker than the previous, iJustine shows the true capabilities of these devices. In the end, she winds up on the beach where the Pixel 3a XL struggles, on the first try, to find focus shooting in the pitch dark. A warning even appears on the screen, telling her to move back for better focus. The iPhone 11 Pro Max didn’t struggle at all. The final result of the beach photos was a fairly decent one by the iPhone while the Pixel was completely out of focus (though it had a great amount of light). On a second attempt, the Pixel 3a XL nails it, though the iPhone 11 Pro Max gathered more light.

In the end, iJustine summarizes that both smartphones are incredible in terms of a small camera inside a smartphone. She asks her audience to make the call, saying it’s down to preference, mostly due to the cooler or warmer look.

Another YouTuber, UrAvgConsumer, put the iPhone 11 Pro Max head to head with the Samsung Galaxy Note10. Beginning with a portrait in daylight, he remarks how the iPhone achieves more true-to-life colors, just like the brand intended. The Galaxy Note10 has a cooler tone. He also notes that the Galaxy tends to blow out the highlights while the iPhone retains more detail.

Like iJustine, UrAvgConsumer concludes the iPhone 11 Pro Max does a better job at capturing natural colors but, it comes to what the consumer prefers.

Whether you own the latest smartphone with night mode or you’re using a more dated device, there are still ways to improve the quality of your photos in low light. The rules of photography still apply. Even with Night Mode on the iPhone, images without stability will struggle to have any quality.

When it comes to great stills and video, DJI is a trusted name. The Osmo Mobile 3 is a fully capable gimbal made for your smartphone. Simply slide it in and hold the handle. The Osmo Mobile 3 holds your device steady no matter how you move. This is key for capturing at night, especially if you’re standing on unsteady ground or balancing. It even offers Story Mode and Sports Mode to cater its abilities to what you need to capture. 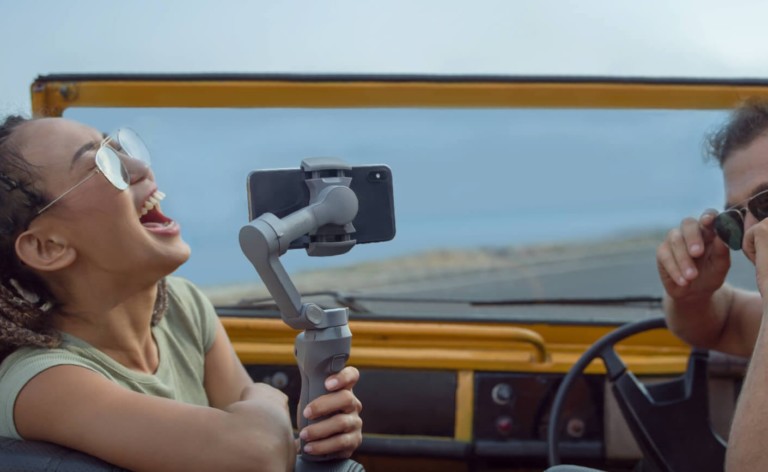 The Osmo Mobile 3 Increases Stabilization No Matter How You Move 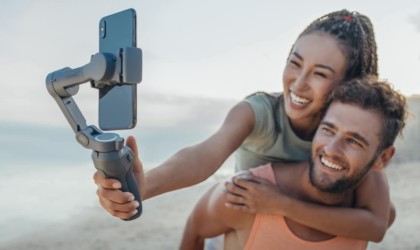 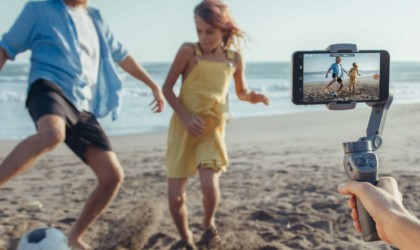 Those who love their DSLR will love the Pictar Pro. It’s a grip for your smartphone but it creates a DSLR-like grip. As a result, you get inherent stability as you hold your device for a photo. But the benefits don’t stop there. The Pictar Pro also lets you adjust shutter speed, ISO, focus, white balance, and more. With this granular level of control at your fingertips, low light shots will be a breeze. 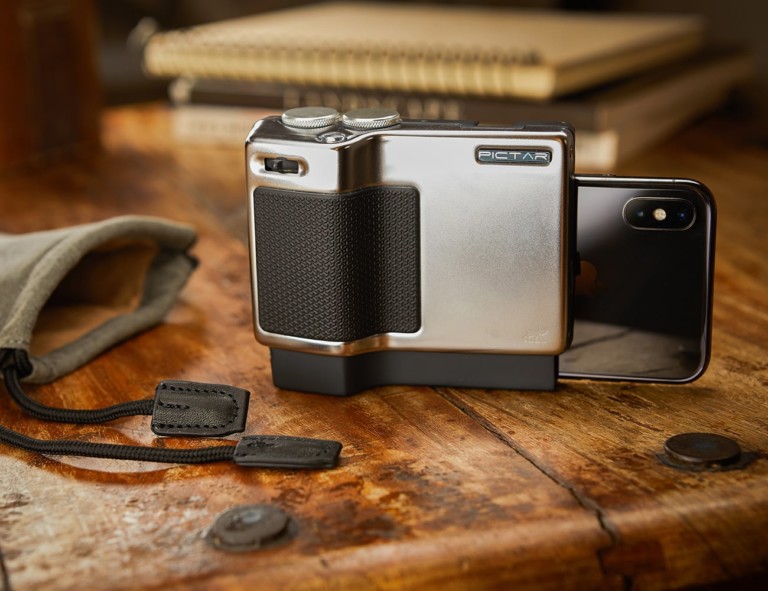 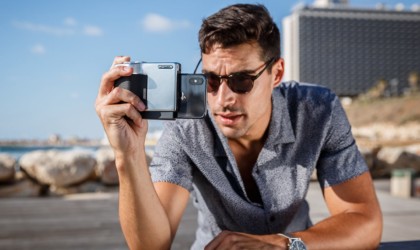 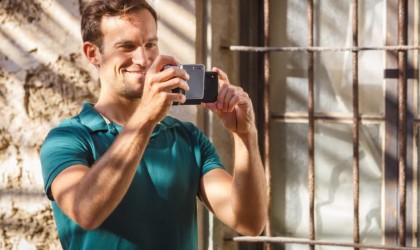 If you want to go truly hands-free, the Lumapod is a fantastic tripod designed for our on-the-go world. The most convenient feature is that it sets up in only four seconds. You can also adjust the height to be just what you need. Likewise, it folds down when it’s not in use. For photos at night, there’s nothing more reliable than a tripod that won’t budge once it’s in place.

Looking for something simple and without the frills? The Lensta Grip is the one for you. Though it has plenty of features, this unique grip comes with your choice of leather or corduroy finish, making it sure to stand out. The grip has a built-in shutter button. Because you don’t need to tap your smartphone to capture the image, you can better control its stability. Or, you can prop up your smartphone for even more stability and use the Lensta Grip as a Bluetooth shutter release. 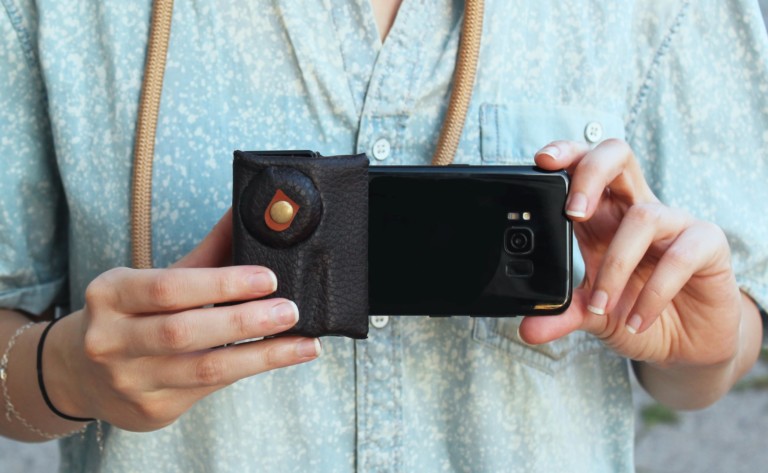 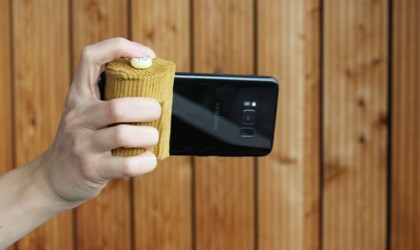 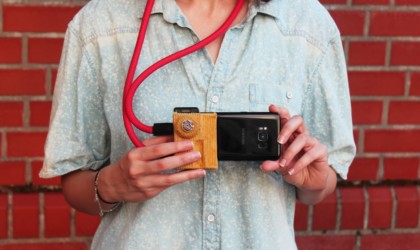 For some, a grip that turns your smartphone into a DSLR is just a bit too foreign. The Shoulderpod S2 solves this by taking on a monopod design. Though it’s not telescopic, it has a single rod design. It makes the grip effortless and durable. Likewise, this means you can hold your smartphone in a variety of positions or even prop it up. It’s great for those low light shots you want to grab on the go. 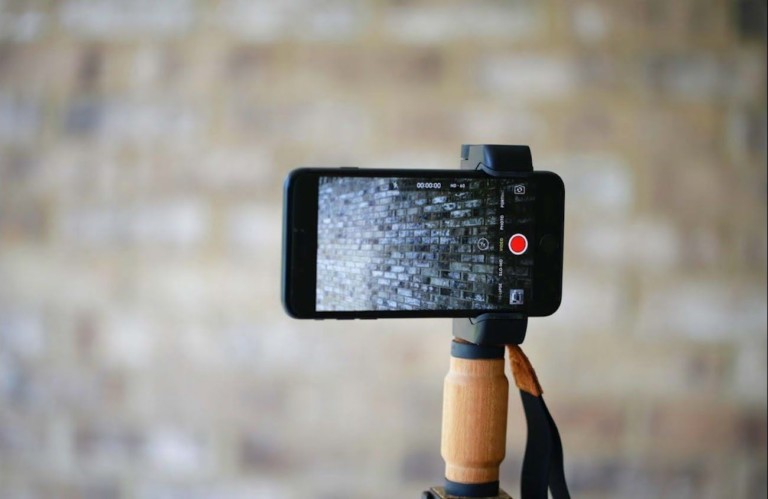 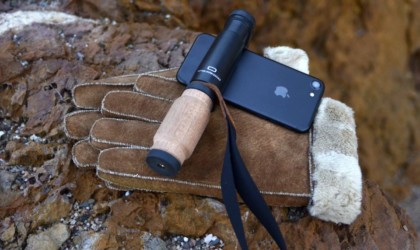 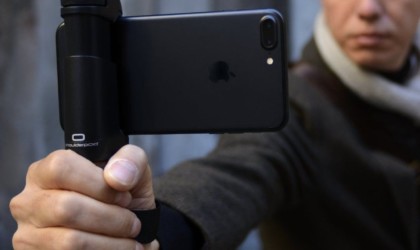 Just like photos, videos need a steady hand in order to avoid blur, especially in reduced light situations. SANDMARC’s Film Rig puts your smartphone in the center and gives you a comfortable and ergonomic grip. The lightweight rig works with devices beyond your smartphone, including action cameras and DSLRs.

Which is it for you: will you be sporting one of the all-new smartphones that come with night mode? Or will you rely on a steady hand and the best smartphone accessories to capture your low light photos?

Ashley Timms is an editor at Gadget Flow where she gets to write about the most incredible products in the world. When she’s not writing, she’s producing fine art dog photography.
Write your comment..
Mirco

How can you write such article without even mentioning HUAWEI and XIAOMI?? These 2 brands are at the forefront of mobile technology, especially in the camera department!

The reviewer of this blog only happens to never know that Huawei is the King of Night Mode shots. (Facepalm)